Sometimes you just need to walk through a door

My weekend has been quite ordinary. I've spent time with my sewing machine and last night I gave my help to my boyfriend who transferred his goods from old place to his new dwelling which I saw for the first time yesterday. I need to say I envy him a bit! A big living room and bedroom, kitchen and a walk-in closet! (which was pretty large aswell). 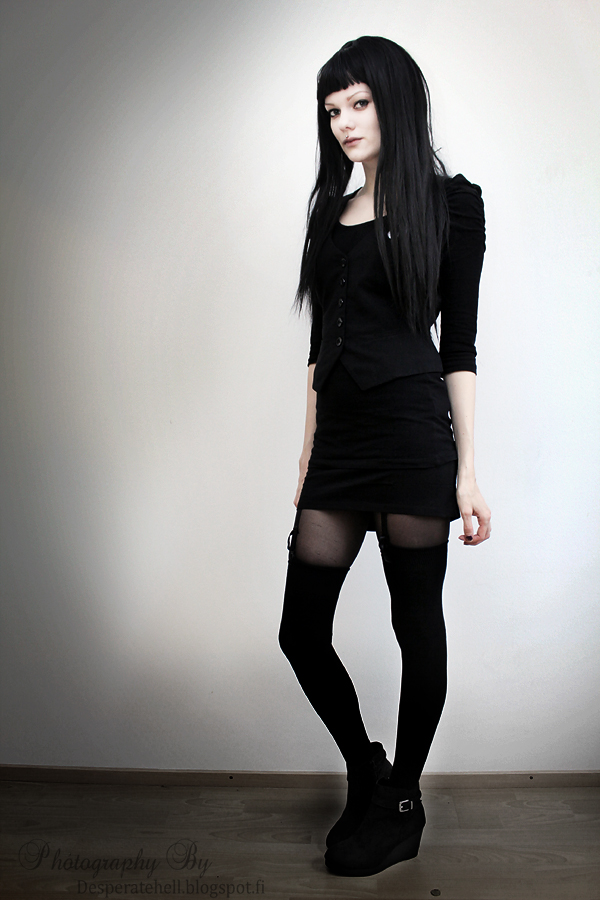 The shoes which I found a week ago. Unfortunately I need to admit finding these in H&M which automatically means the bad quality. They are good to walk but likely they won't last daily use because of the synthetic material. I've been looking for the wedges in a long time without the results. Last winter I saw a nice pair in a local shoe store but they were bloody expensive and when I later went to see them they were gone (and they would have been Vagabond). I'm sure I'll bump into the better choice now having bought these! 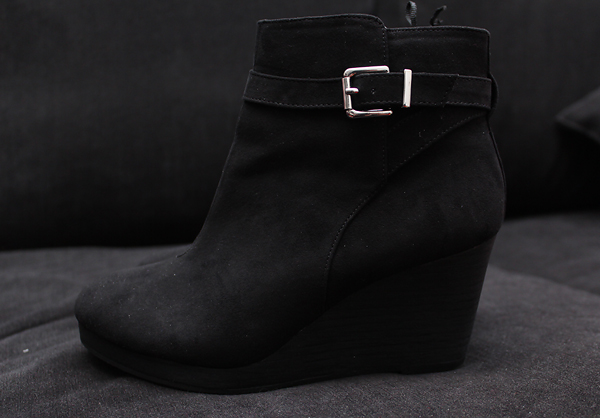 I started reading Cobain's biography last night. I've read this once before but because Cobain is somehow a mystical character I decided to give the second try for this. It's seems to be a season that I go through my whole book collection. 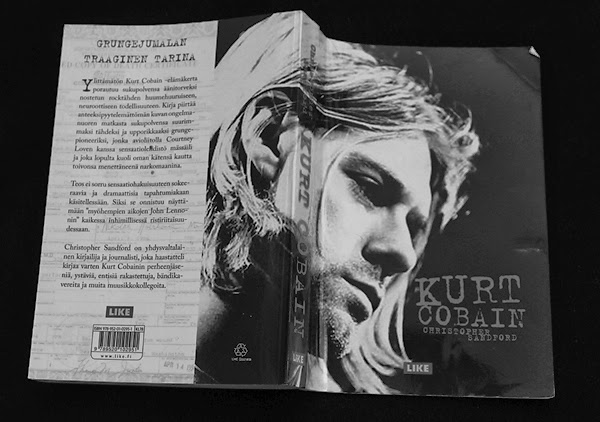 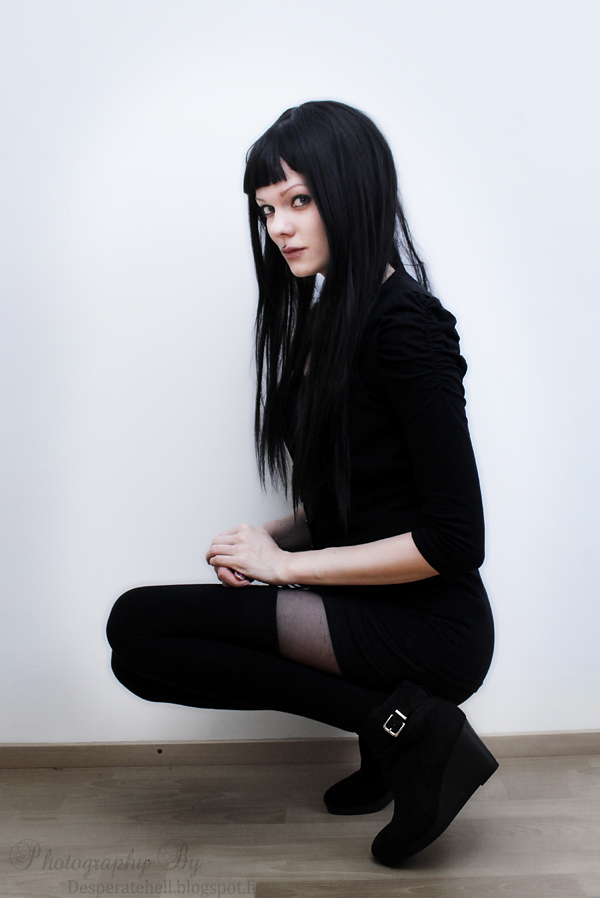 I have been listening  the band called The Church over the weekend. My boyfriend suggested this to me a long time ago and I remembered only now to listen to them. A fine music finding!

Ps. I noticed a few days back that blogger was put some comments on the trash can for some reason. So if you have wondered why I haven't published your comments, it's due to blogger.
Lähettänyt Suski klo 15.08 12 kommenttia:

It's good to hide in between the lines 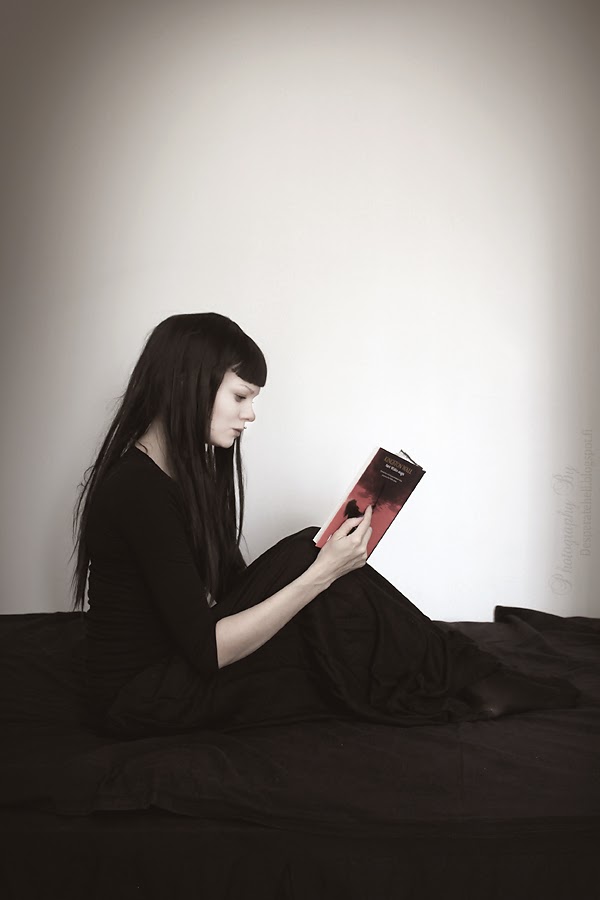 What I do when the increasing light annoys me and I can't get anything done , I sink into the books. It's a long time since I bought a book the last time but now I had to do it (usually I try to use the library as much as possible, but now there seemed to be such a long queue with this book that I couldn't wait.) Kingston Wall: Petri Wallin saaga was published in February and I wanted to read it immediately. There has not been much information available about the band before the publication, so that's why I was extremely interested. 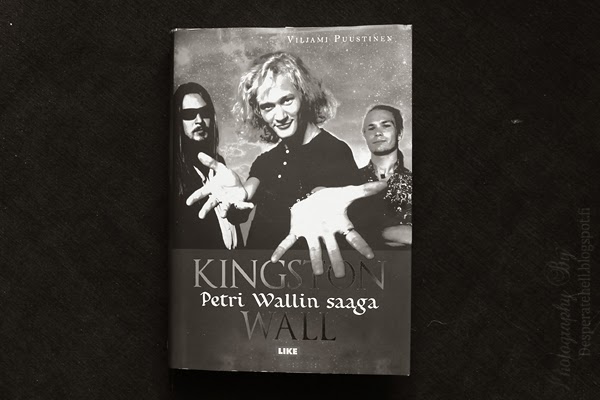 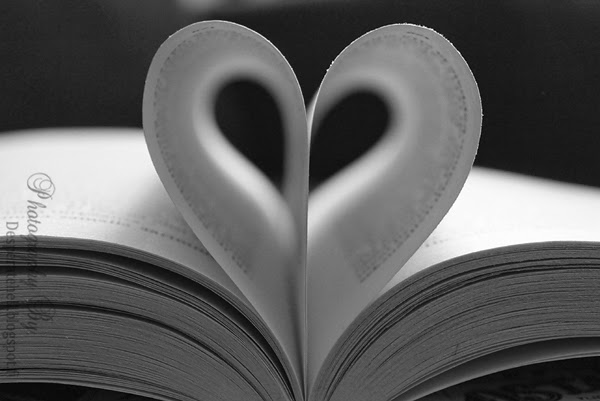 In addition I read inside the week: Nancy, I don't want to live this life and Vicious, too fast to live which both I've read several times before. Last night I started I dreamed I was a clean tramp: an autobiography by Richard Hell. Yes, it seems that I dwell in between the lines so far. 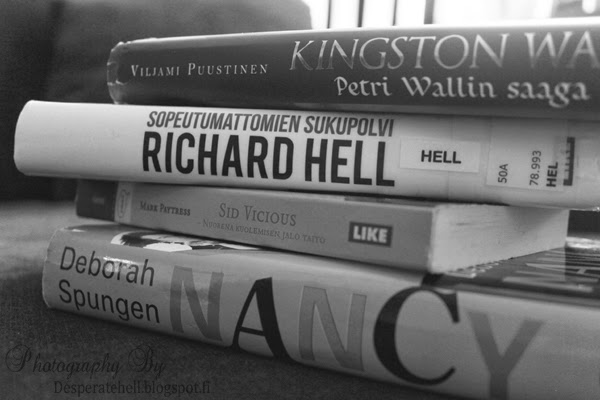 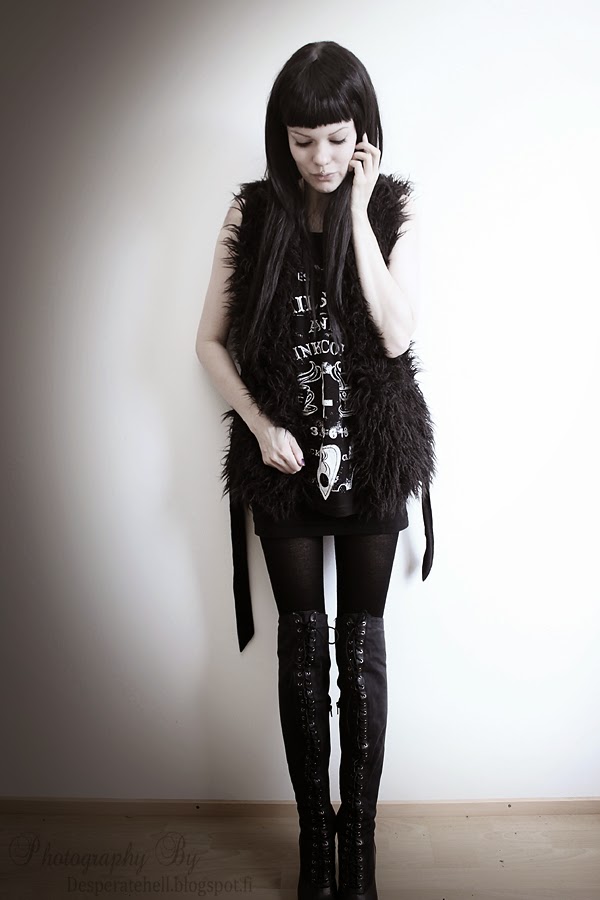 When I opened my eyes in this morning, I had to roll my eyes a few times. At first I thought to see delusions until I faced a truth, the winter really came back and the snow covered over the ground. A few days back my thermometer hit +10 degrees, so it was difficult to believe that the snow would come back. So far no the spring coats then. 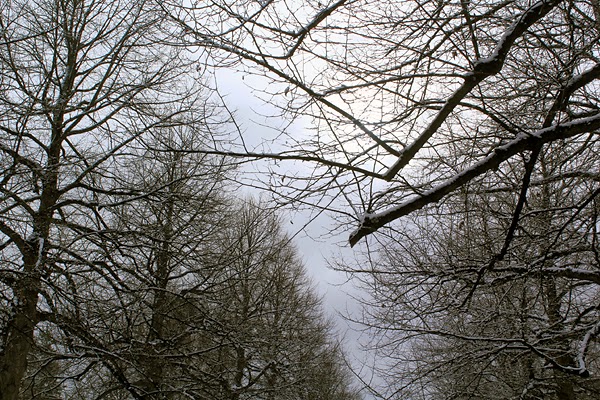 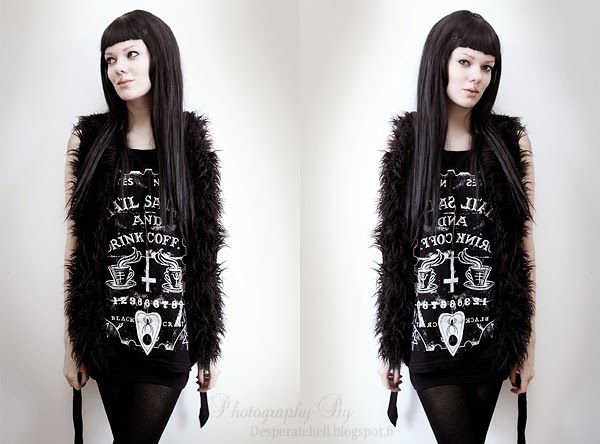 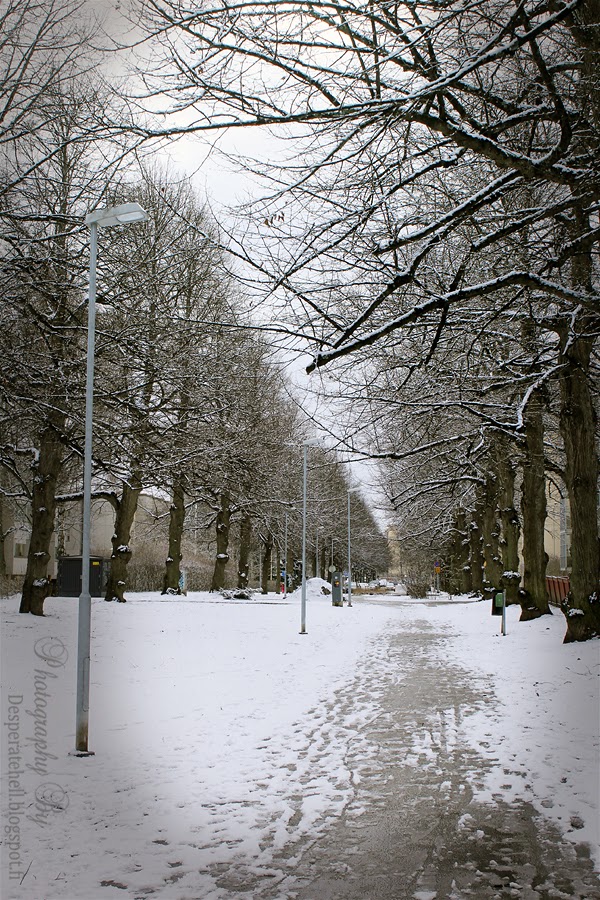 I took a few shots while walking through Amuri in the morning. I went to search for the new workout clothes but instead of them I found something else. Shoes! But I'll come them later. Like I mentioned, I bought a monthly pass to the pole studio and I've visited there quite diligently in this week. I've attended the new classes which have been really nice.

I have dozens of bruises and the muscles are aching but I don't let that bother. I'm just happy that I'm inspired by dancing. Striptease is a great sport as long as you don't take it too seriously.

And what else I've done. I started a new sewing project two days ago and the new jacket is almost done. Last night I took a few promo pictures, but I'll reveal them later. I haven't gone them all through yet, but to my delight there was at least a few good shots! 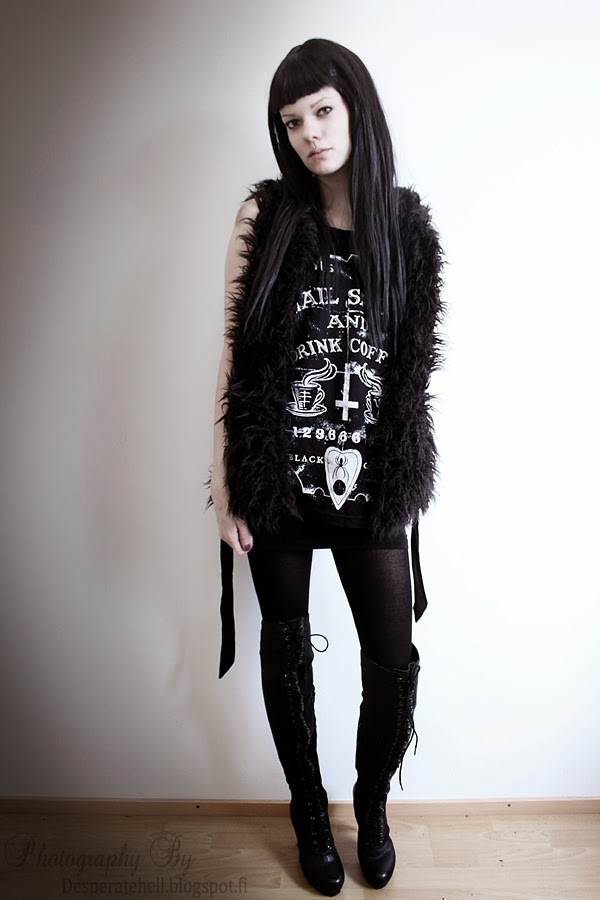 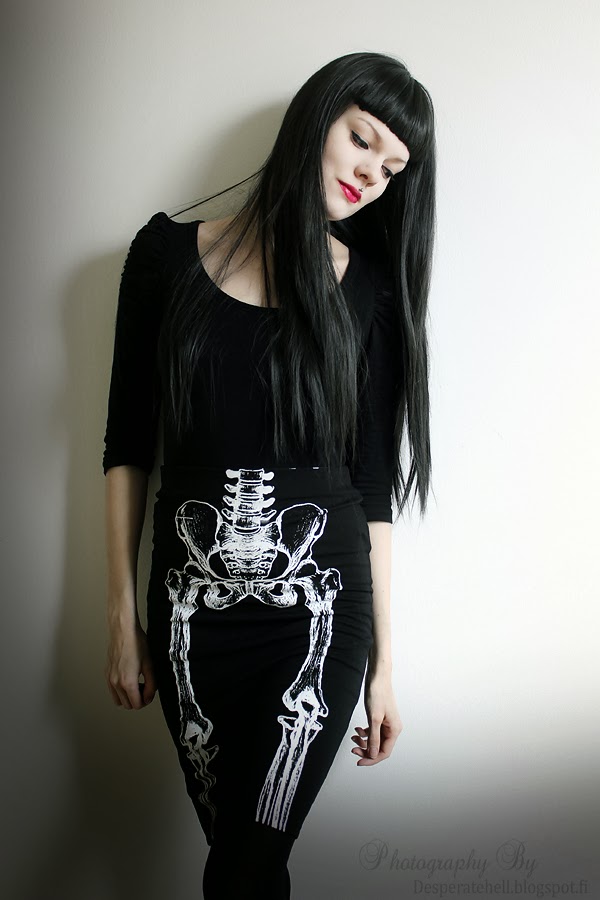 A few weeks back I purchased this Iron Fist bony skirt when I found it at a low price. It's adorable and I've already worn it more than once. Especially I love shape of the skirt for it's really tight and the hem is narrow. I have a love-hate relationship as for Iron Fist. Some of their products are so ugly that I can only wonder how someone is able to wear them, but then again it's possible to find some pearls from among. I own only one shirt from their collection before the skirt, but I've considered to buy the high heels many times. 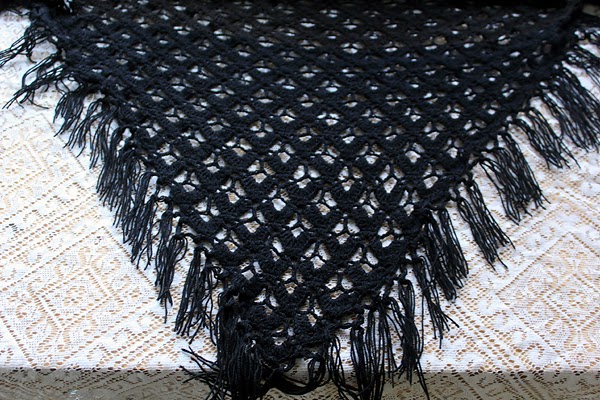 A week ago I visited a flea market. I found a scarf and a pencil skirt this time. The scarf is perfect. I love a lot of crocheted/knitted scarves and most often I wear them. The skirt is a bit too loose even if it's a size of 36. I probably need to show a sewing machine for it or wait for gaining weight. 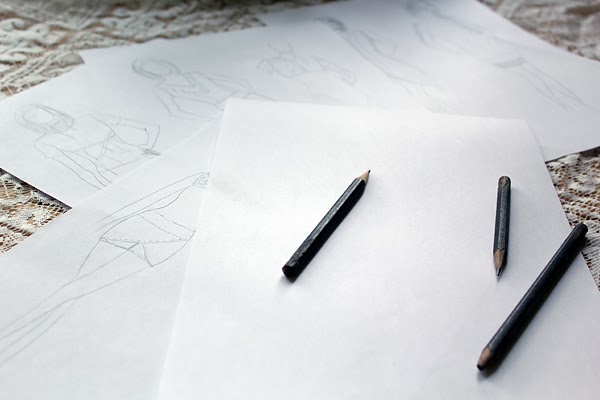 Spring is everything, but a creative season to me. The amount of light is making me more tired and displeased as anything else. I feel everything, but energetic. I tried to do some drafts yesterday but my inspiration was digging a hollow. A bunch of fabrics waits, but I let them wait as long as I get my enthusiasm back (I hope it happen before the autumn). 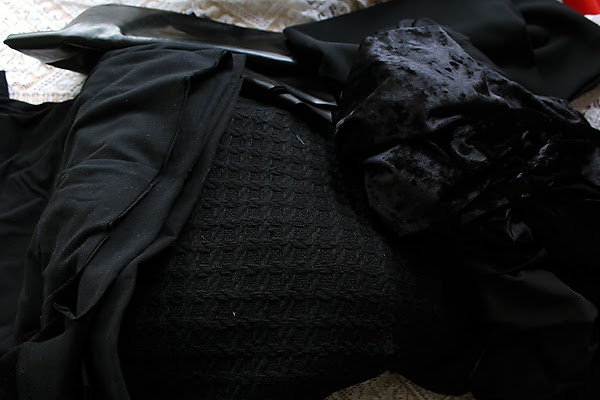 I bought a monthly pass to pole studio on Friday while visiting aerial silk class which was super nice! (if you don't know what it is click here). From now on I try to visit at least three times a week there during a month!
Lähettänyt Suski klo 16.39 2 kommenttia:

Dark shadow of the night 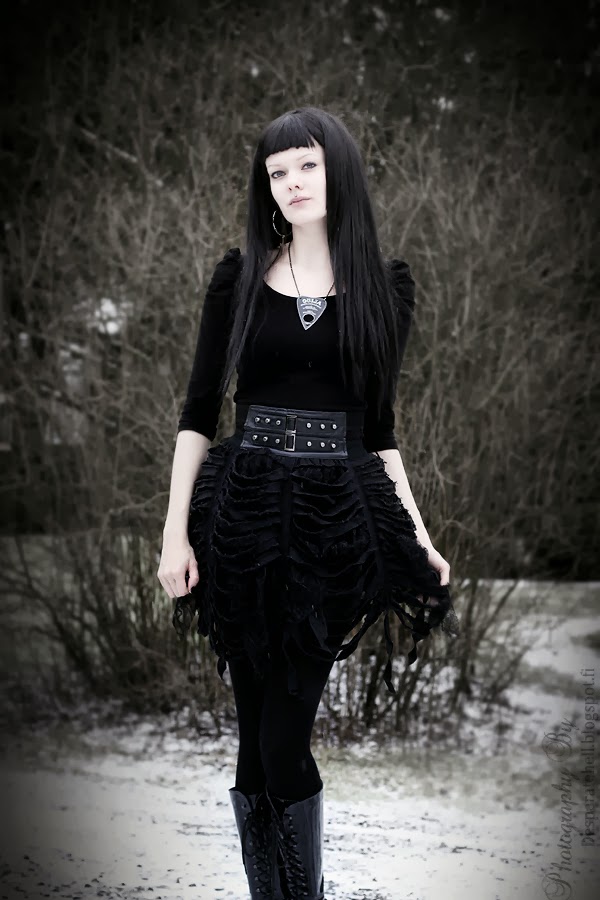 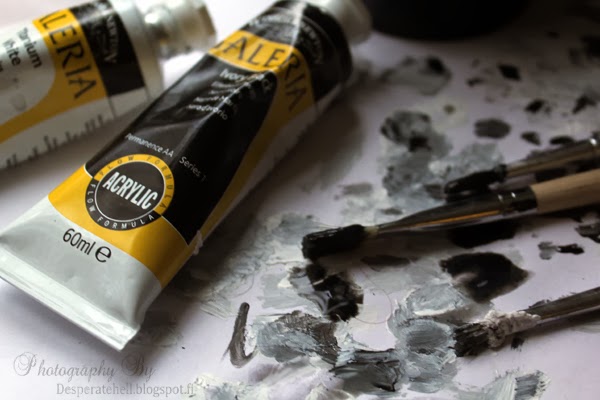 I'm immersed in the world of painting during this week. I don't have experience just at all with acrylics so everything is quite new to me, but I'm really eager for learning. I've always been really interested in painting in acrylics or oil colors, but usually lack of time has been a barrier. I've used the water colors so far which are totally different to handle. However I've managed to do something.  My beloved promised to give me a ride to Ikea the next week so that I can buy the frames to my work. 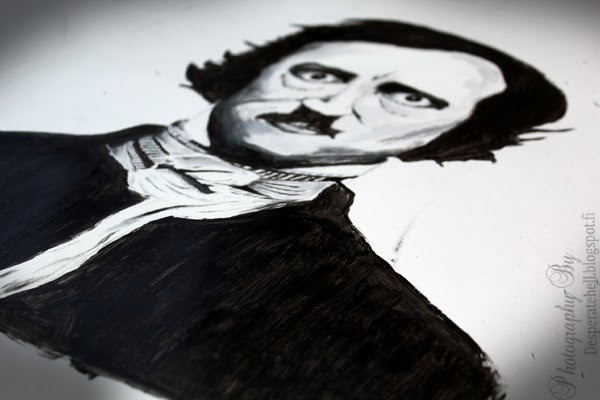 Some time ago I read the novels of Edgar Allan Poe and I got an idea that a portrait of him on a wall would be a nice. Here is a sample of an unfinished work. I feel a bit uncomfy to show my works here nowadays when people always distribute them in tumblr, pinterest or in the other crap pages. It's quite frustrating. 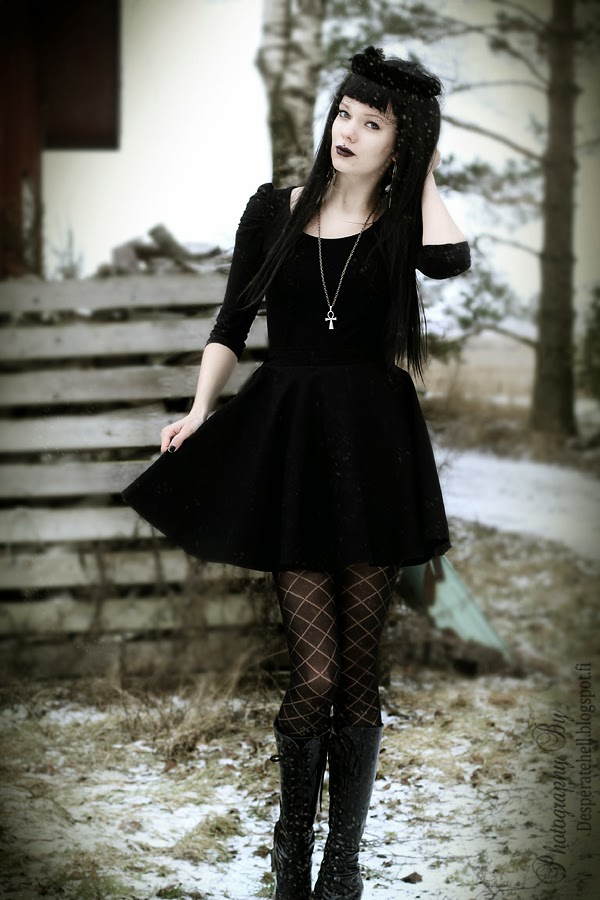 I've been mostly drifting here and there and dreaming too much over this week so that I've forgotten to come to the real life in between times. I headed for the German class on Tuesday evening until I realized while standing behind the locked doors, the lessons were cancelled due to the ski vacation. It describes pretty well how well my brains work. Well at least I got a good walk having walked six kilometers just to attend the class. 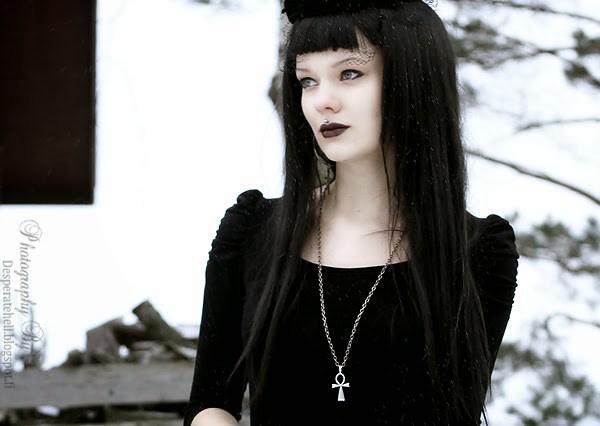 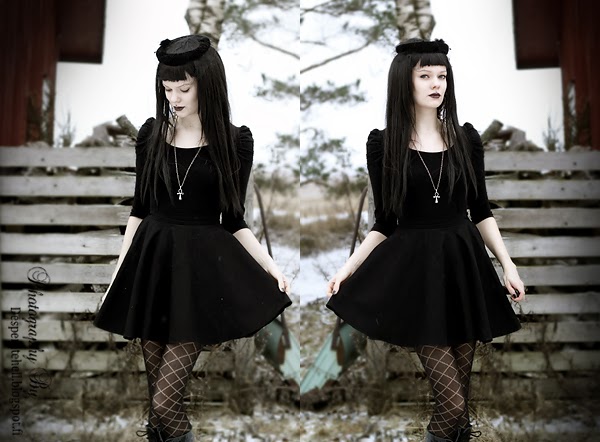 We watched Filth on Thursday night with my beloved, and I need to recommend it for you, especially if you appreciate the black humor. The film is based on a novel of Scottish writer Irvine Welsh (the best known for Trainspotting), and was published the last year. I haven't read that novel, but having seen the movie it might be appropriate to read. The film involved also some scenes which smack of a bit Fear and Loathing in Las Vegas.
(In addition to this I've spent too many hours by watching the Breaking Bad, but this is certainly not a surprise to anyone? The last season is running now so I'm almost at the finish!)

And as for dreaming, I've planned a few journey to do. At least I try to visit Eastern Finland after a long time, but in addition my heart desires abroad again. But it'll be seen. I come likely to the east in early April, so you've been warned!
I watched the cheap flights to London a few days back. I'd like to pay a visit there over a spring, but so far it is just a dream. Vernal London is an attractive option, and I could go on my own, but I'm worried about my leg. I'll stop my medication within a few days so I live the critical moments through for the time being. 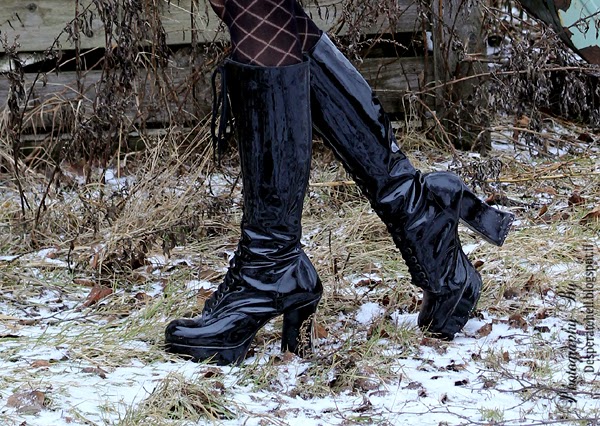 I wish you all have a nice weekend. I try to do pole dancing. I've had way too long a break with it.
Lähettänyt Suski klo 10.10 6 kommenttia: