I was off today by way of exception and  spent most of my day at home if not count a gym visit. Rest of the day was well spent on the sofa with a book and Netflix. I finished Orange is the New black and I need to say the season turned out to be quite good though I suspected it initially. I'm quite lazy when it comes to the series, but I find it's only a good thing. Earlier this week we kept a movie evening with my other half and watched Evil Dead refilmed version of it which I hadn't seen before. The basic horror  movie which didn't manage to evoke big emotions in me. A lot of blood and some quite disgusting scenes... perhaps I have seen too many similar projects. 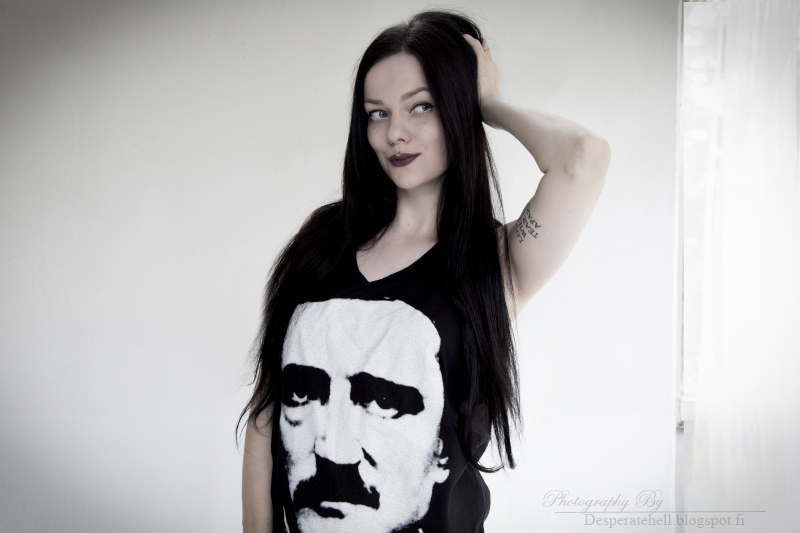 Today's outfit was an old Edgar top and I also scooped out the over knee boots which belongs to the autumn. They work well in a daily use. 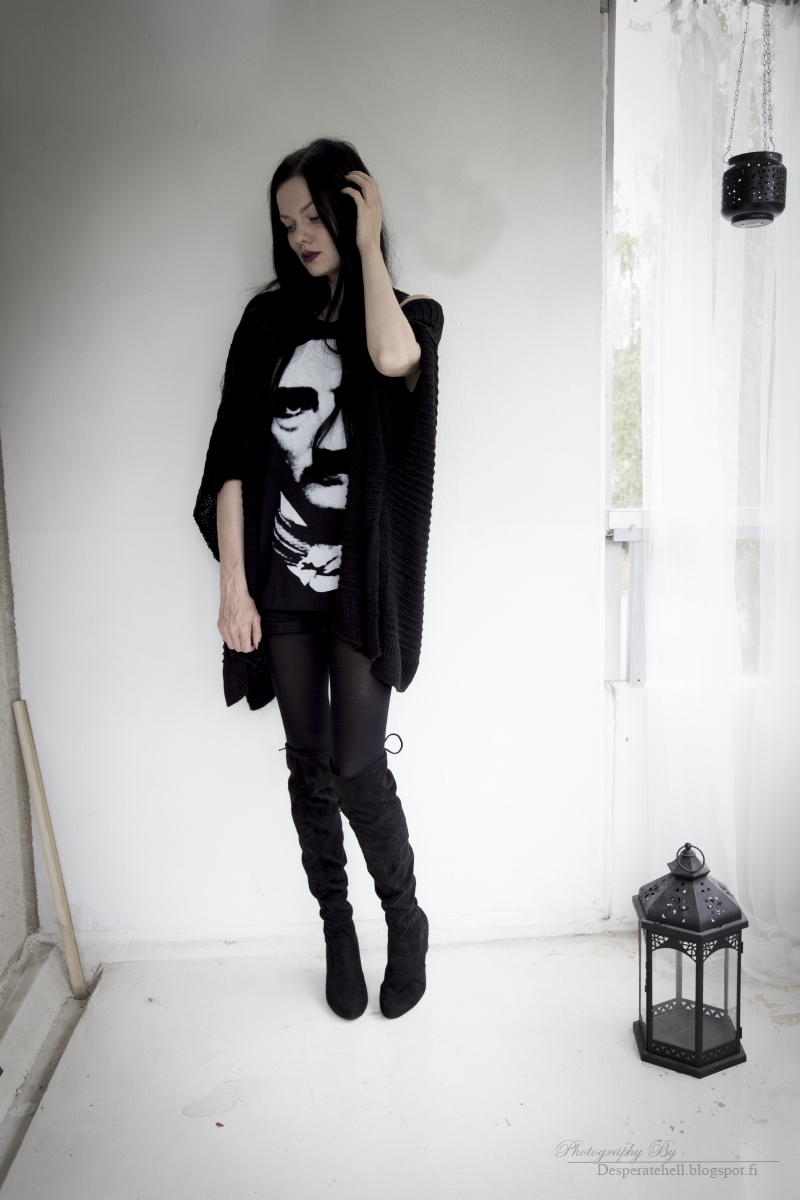 And speaking of the autumn it starts officially tomorrow. A year has gone really quickly. It feels that the previous autumn just was.
Lähettänyt Suski klo 21.31 4 kommenttia:

There can't be too many dresses, right? I'm a real dress fanatic. Usually I'm sewing the new dress or I'm dreaming of them. And the most funniest thing is that as a kid I couldn't stand them. Now I find them as easy to put on in the mornings when I should already be out of the door. 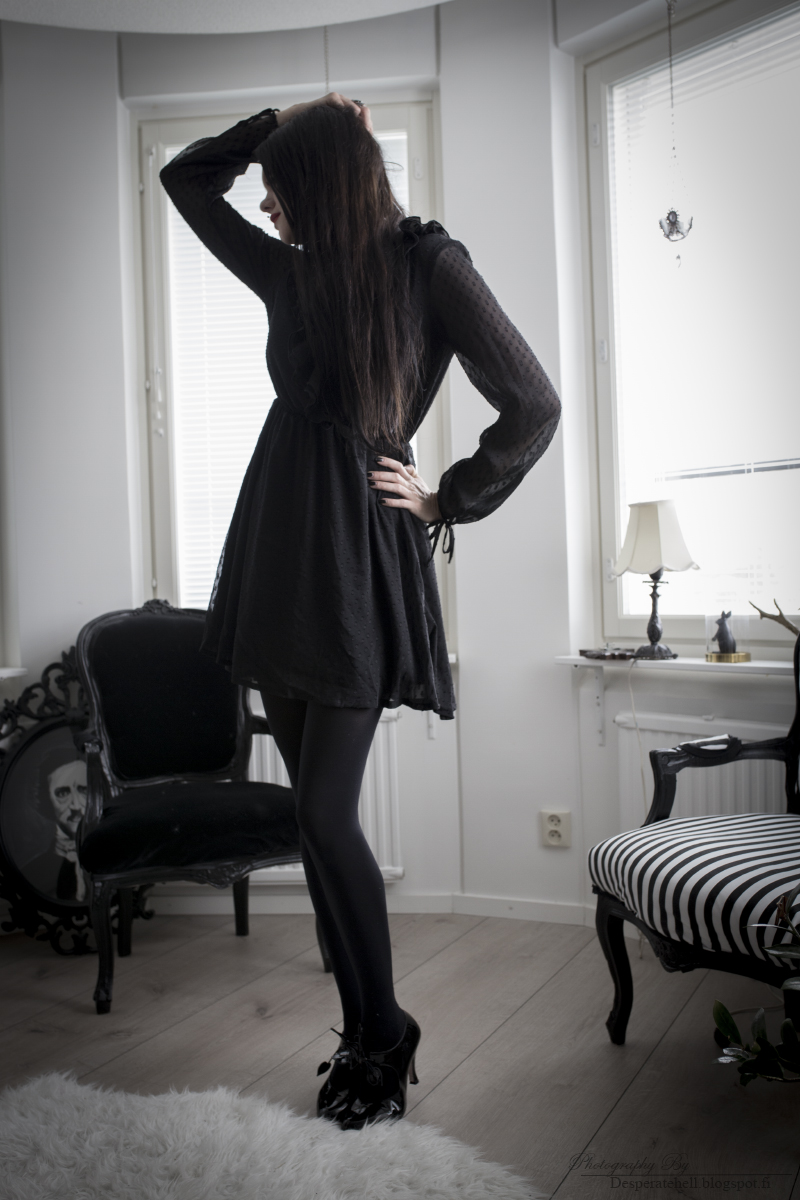 My current favorite is the chiffon dress which is light and suitably translucent and not forgetting those lovely ruffles and the pattern of fabric. Heart shoes by Minna Parikka matches perfectly together with this dream piece. 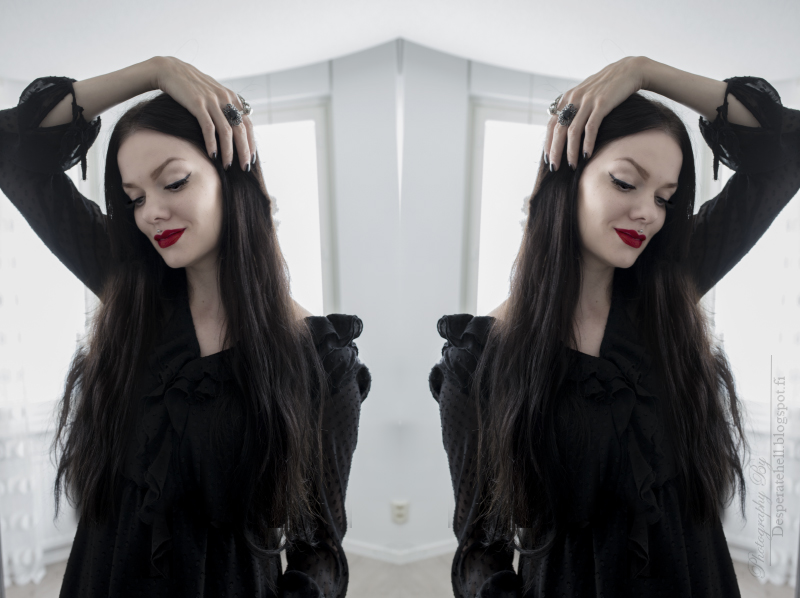 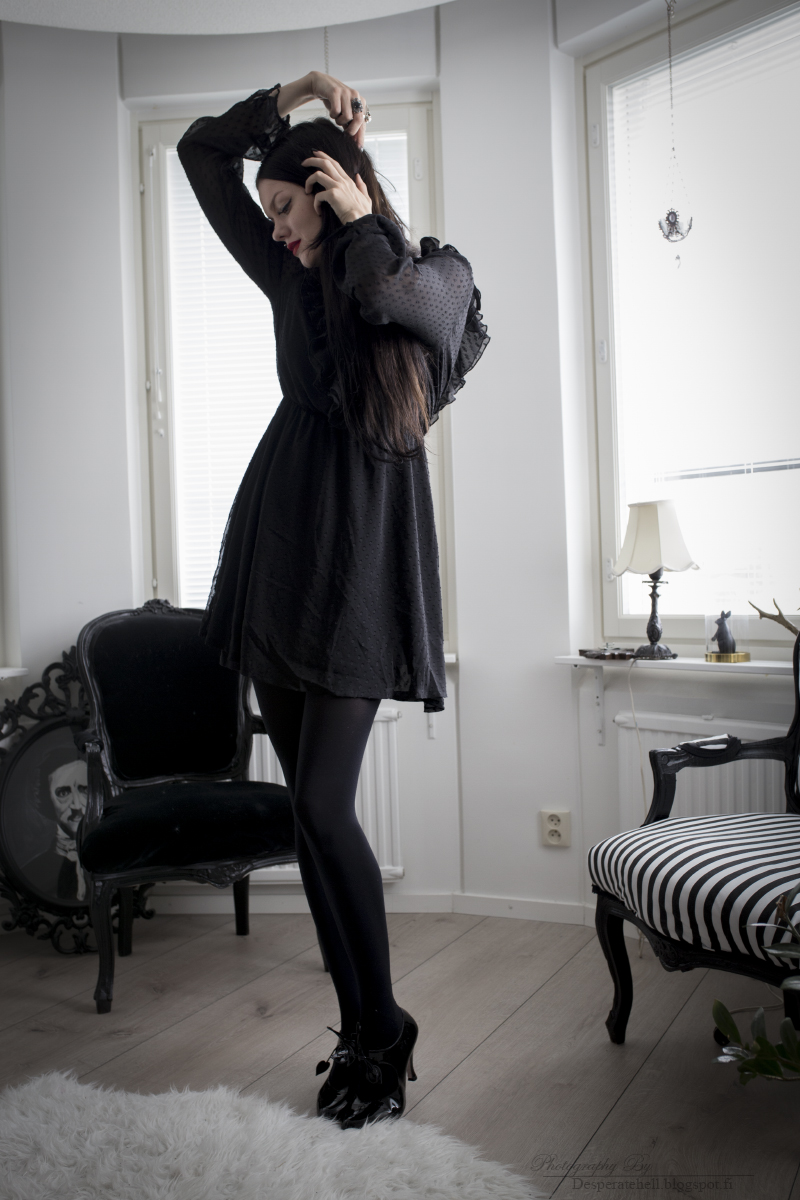 In this outfit I've gone to work during several days. 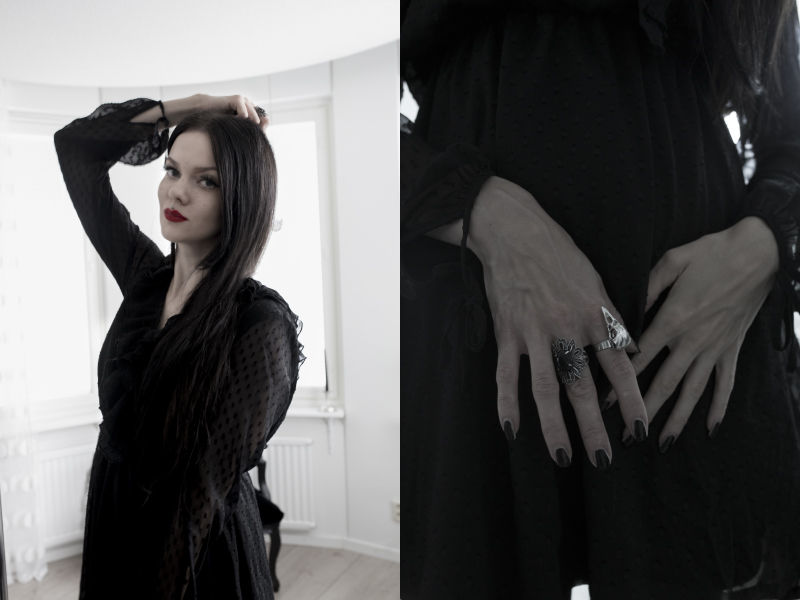 And yep, I stitched the new dress again, but I return to that later when I have time to take pictures about it. I also try to arrange time to undergo the wardrobe. I find it's too full and surely there is pieces that I don't wear anymore so I was thinking of renting a table from the flea market to get rid of those vanities. I prefer more well organized closet to quantity.

Sorry for my absence, I have just had so much other things to do that there has had great difficulties to find time for blogging. But here I'm and still very much alive.

In a nutshell I have spent quite much time in the gym after work now when the heat wave is over and there is again possibilities to do some work-out. The gym where I'm training is pretty good, but the ventilation is really poor and during the heat wave the temperature increased so high that it was impossible to do anything. So I kept a break, but now I've returned back to regular training. I've also been  doing some pole dancing and it feels awesome after a long time. I even consider to attend a class when I was offered exercise vouchers from the work. It sounds like I'm a sportaholic these days. But it's true; I have changed as a person more and less. Sport helps me to keep my mind in balance and of course it helps to keep extra kilos off.

I've also been doing promo shootings and I would love to photograph so much more, but the time limits my dear hobby too much. But I'll try to find  the time for it. I've also been sewing and me and my beloved took a mini golf tour one day in this week. In addition to this all I borrowed a pile of books one day and I've spent time by reading them like a real bookworm. I also started watching Orange is the New Black and after the slow start it has run nicely. Enough many reasons for my absence? ;D 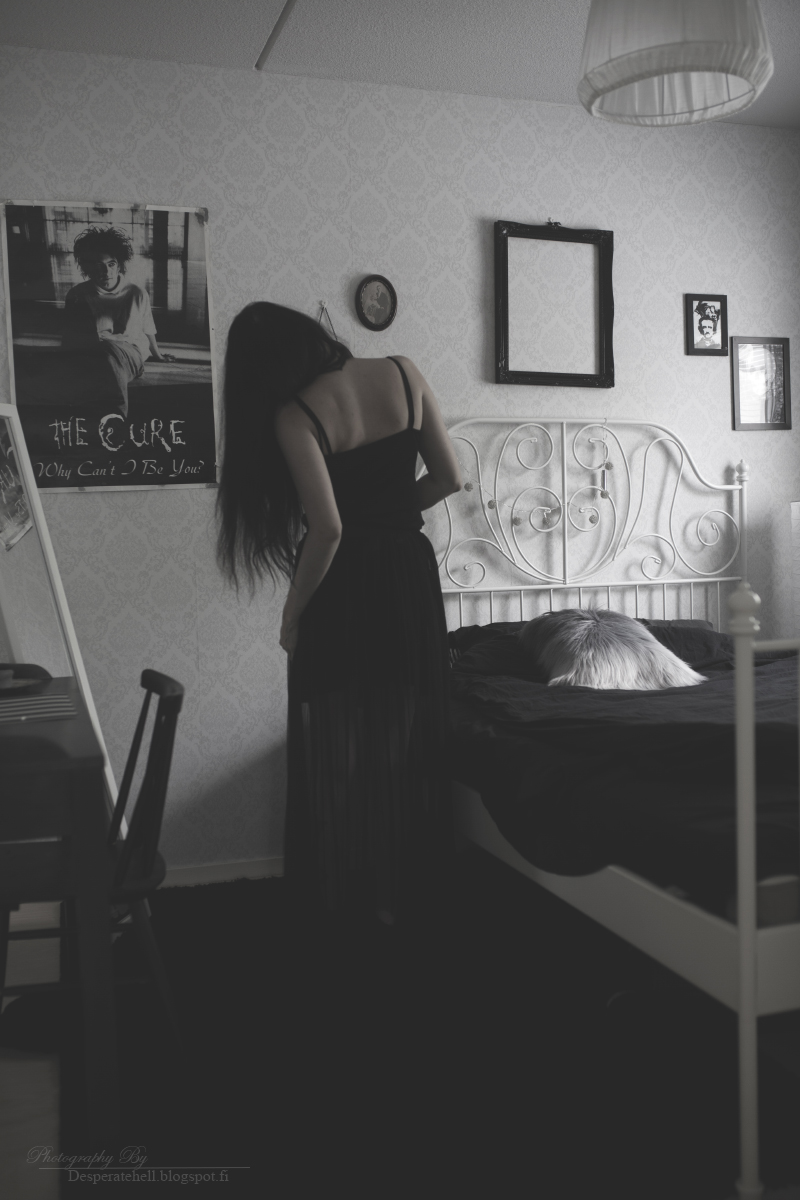 These picture were taken a week ago when I decided to keep a home weekend which was very much needed. I went nowhere except the gym. I've been going all the time so much that sometimes it's a relief to stay just at home. 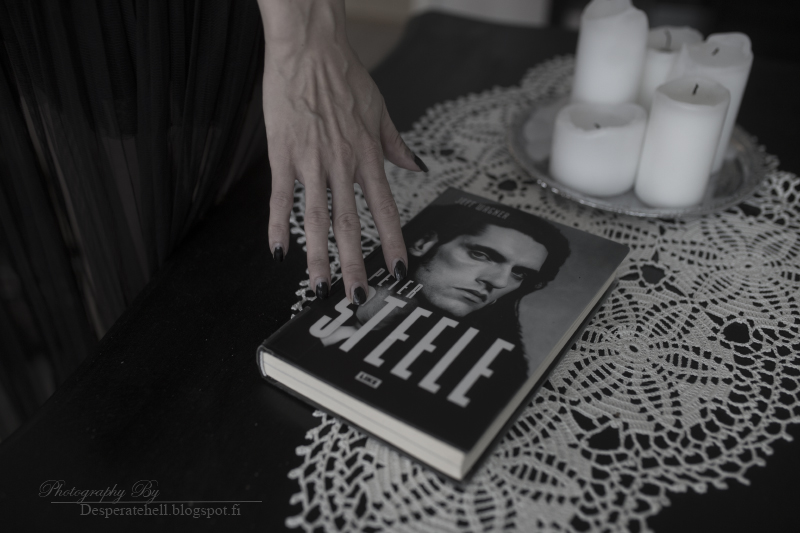 I borrowed  this book about Peter Steel although I read it a couple of years ago. It's just good and Peter was a mystic character. 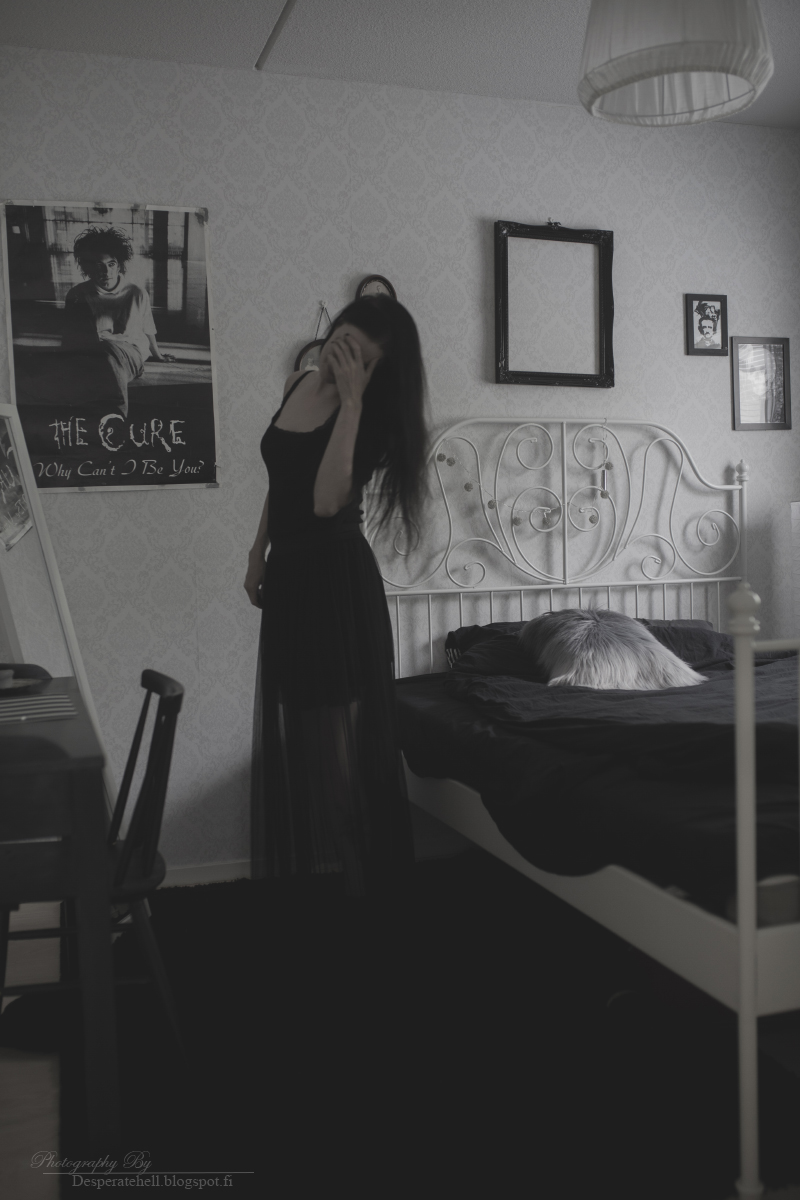 It's a last weekend of August and there would be such a many events and I'm not sure if I go anywhere. Burlesque show would tempt a little bit to go, but it will be seen if my couch wins or not.
Lähettänyt Suski klo 14.17 Ei kommentteja:

A week rolled again and the weekend is coming to the end and like the previous weekend also the current consisted of some live music and wine.. what else. On Friday evening me and my boyfriend headed for seeing local philharmonic orchestra which was playing for free at the park and there were such many people that I can't describe. It was kind of  giant picnic happening where the orchestra was playing. I wasn't even able to see the stage, but the mood was great and the wine was delicious. After that we paid a visit to the bar and eventually I was dead tired.

I was dressed in a poncho which was a bit too much because it was sweaty weather, but obviously my brains are already adopted the autumn mood. 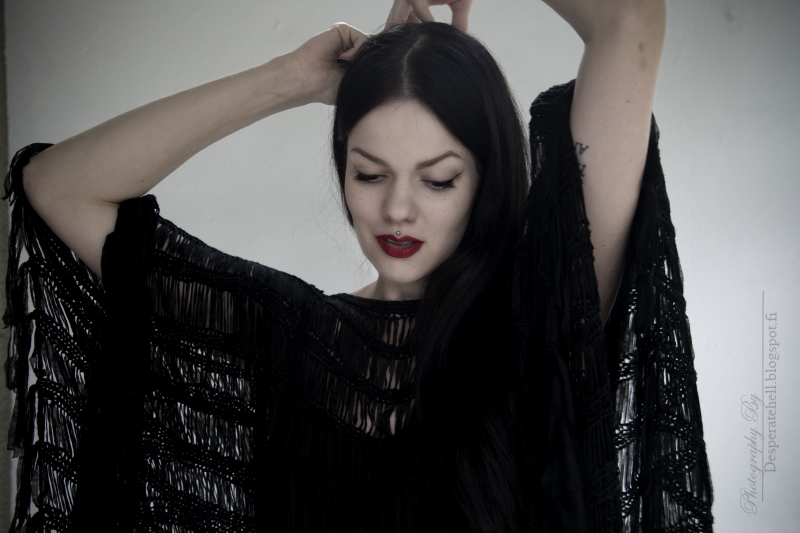 The ponchos and capes are one of my favorite garments still although sometimes they feel a bit too complicated to wear. Especially the autumn is a great season for the ponchos. 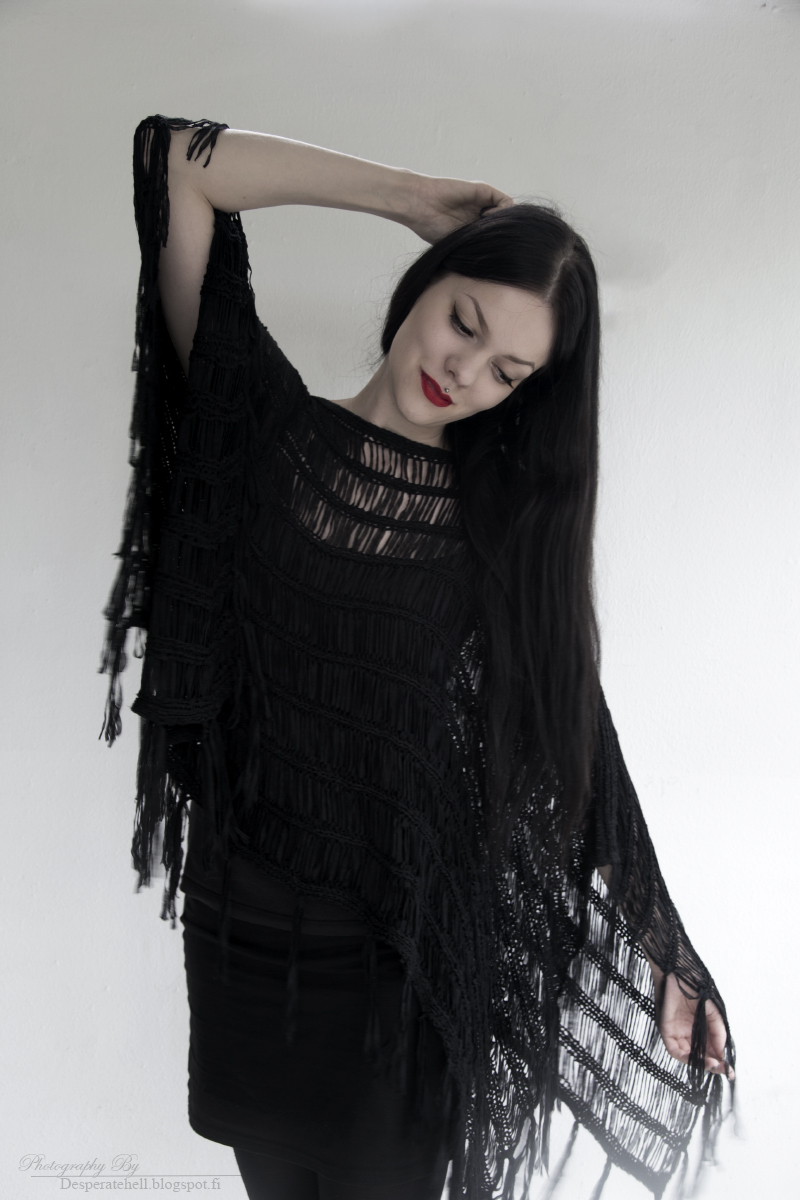 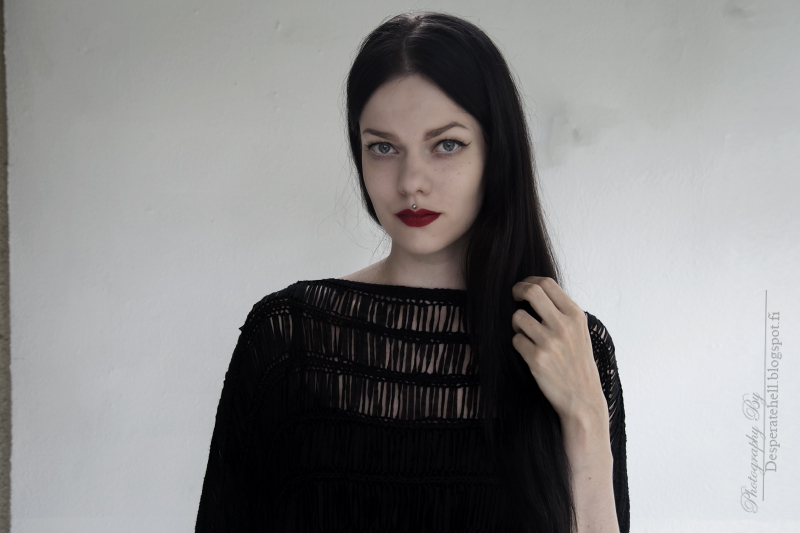 Otherwise I've been bounded to the books and music over the weekend. Yesterday we watched a Finnish film: Hevireissu which reminded me of Spinal Tap. It was fairly fun. Usually I'm not that big fan of Finnish movies, but this was worth watching. I also started watching Orange is the new black, but I'm in stuck and somehow the newest season doesn't taste now. Perhaps I try it later.
Lähettänyt Suski klo 17.14 Ei kommentteja:

Last weekend was very hectic and a full of music and wine. A friend of mine came to visit me and spent the whole weekend here  and like the title gives to understand we attended Saarihelvetti (a small metal festival in an island). This was the first time when I got to chance to go there and this was also the first time when I visited the isle. I've lived here for more than five years and every summer I've had an intention to pay a visit to the isle, but every summer it has not been done. 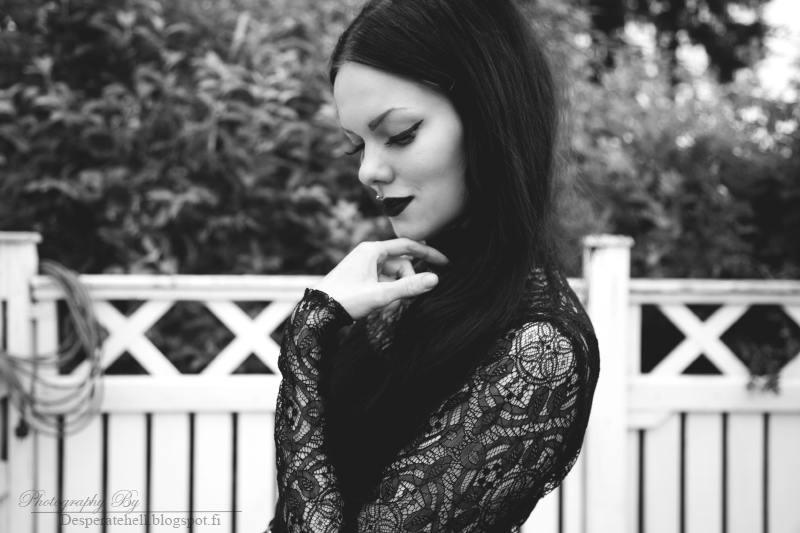 The festival was something that I assumed it to be; the smaller and more intimate festival and the location was very unique and lovely! For those who don't know, you really have to step to the ferry to get there. The small green isle in the middle of the lake and how winsome it was in the night! I do enjoyed our ride back to home when the black lake embraced us around.

The most expected band to me was definitely Ajattara. The finnish black metal band which I was listening to a lot in my early years and the gig was good and my ears still love the dark lyrics and sound.  This was the first time when I saw them  in live and I hope to see them again. I also found something new music: Carach Angren. The black metal trio from Netherlands was one of the best in the whole event.

All in all I have only good things to say about the weekend and I'm absolutely willing to attend this festival also the next year! (I regret that I haven't gone there earlier, but usually I have been at work) 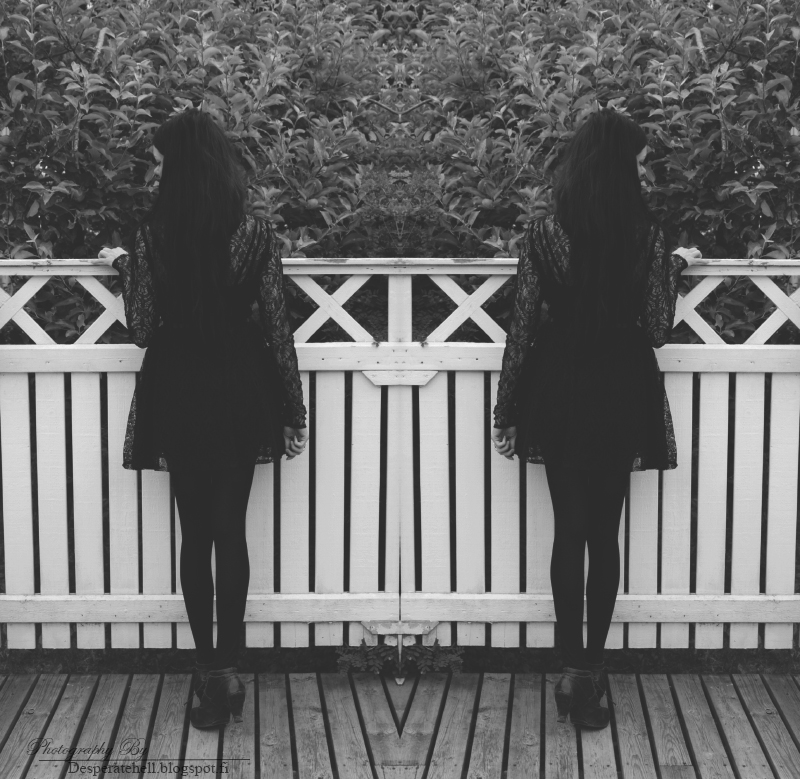 I didn't take many pictures nor the outfit photos, I was focusing on drinking of beer and the music. These outfit pictures were taken the other day, but I decided to add them to the post now.