When we reach the destination?

The vacation runs to its end and tomorrow it's an early morning once again which is perhaps only a good affair. I need to state that I haven't done anything sensible for three days. On Saturday night I visited a goth club and since that I have been floating inside a bubble and been waiting for something. Old demons are dancing somewhere in the shadows and the spring fatigue is trying to win a battle. Too many badly slept nights don't help either when I try to be efficient by days. Handling the time is sometimes too difficult and especially if there is such a many things you would like to do, but you don't know from where to start.

Today I tried to look like a human. The new dark red lipstick from Grimas is my new infatuation. I should only get a liner for it. Now the wrong shade liner ruins it a bit. New striped tights would also be nice. These starts to be filled with the holes. 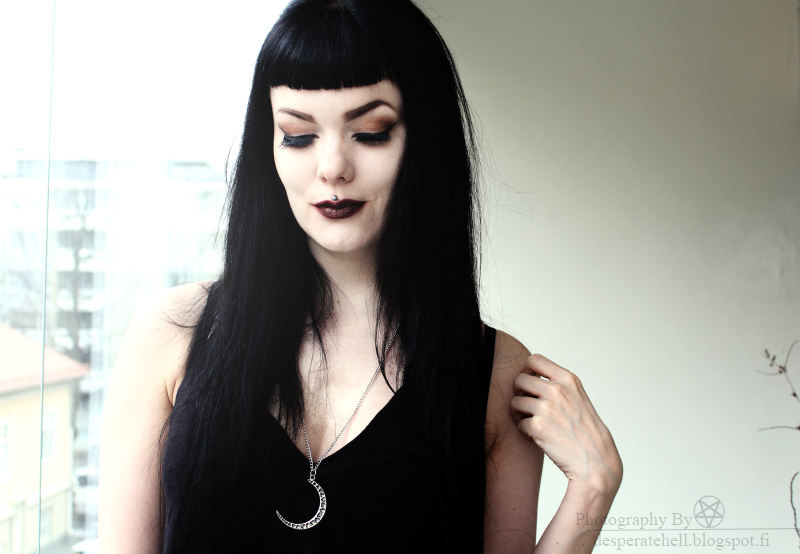 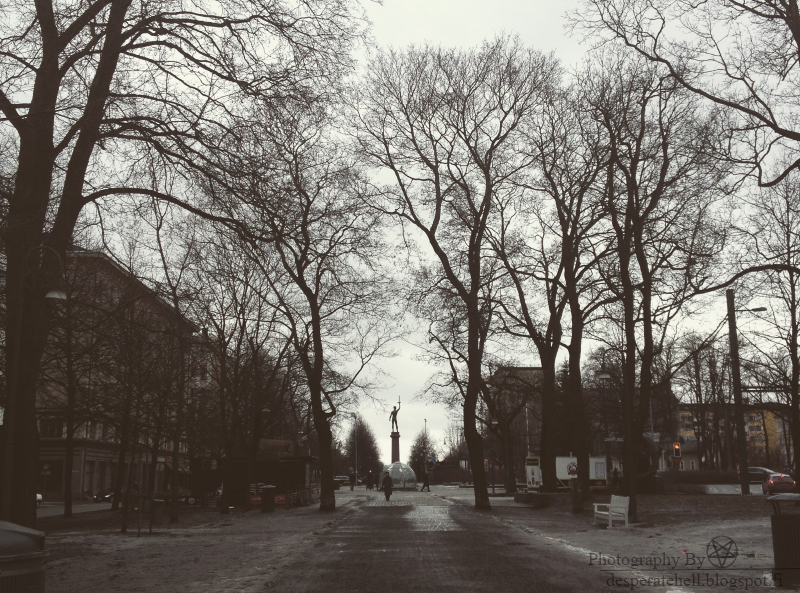 The city looked so attractive a few days back that I needed to stop taking a few shots. 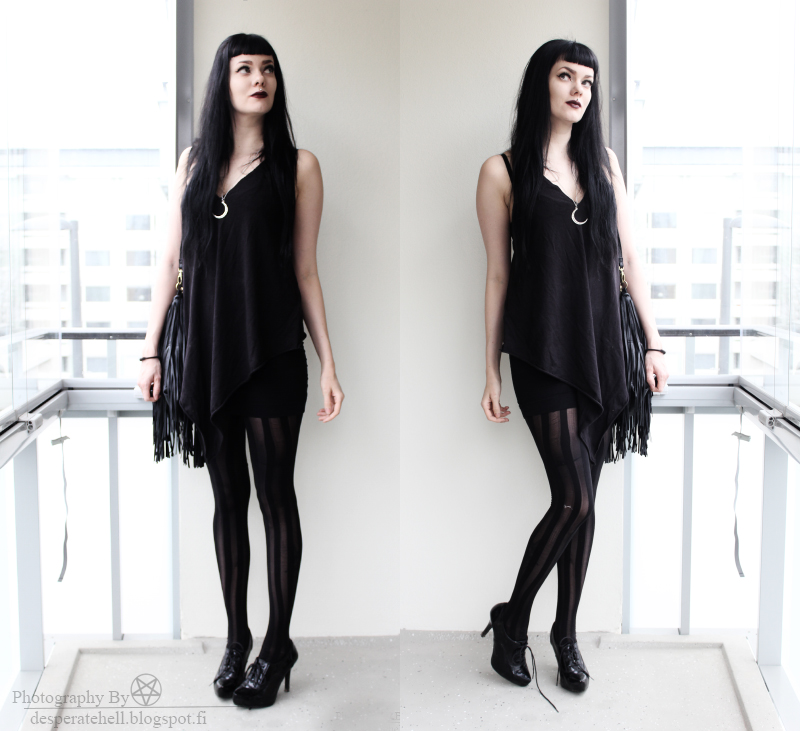 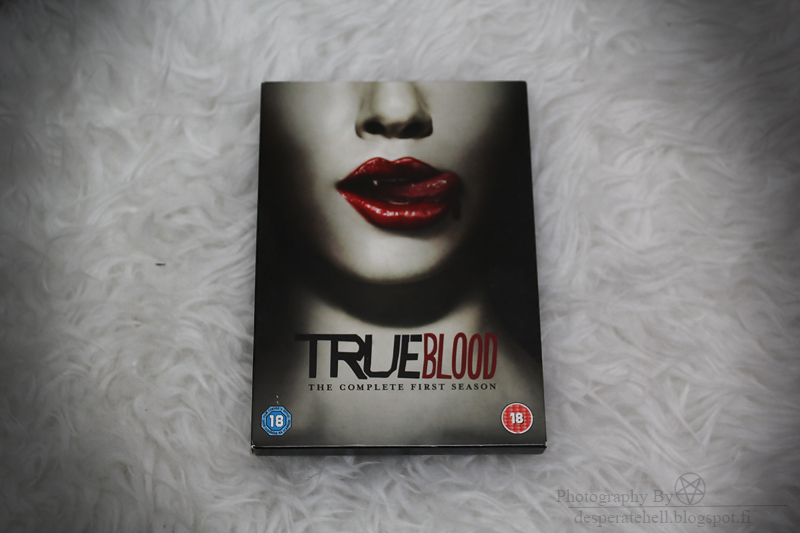 My other half has been too busy so I have spent the quality time with the vampires. I started to watch the first season of True Blood the last night and now there is only a few episodes left... oops. The first two seasons are pure love and the third is fine, but then I lost my interest totally and haven't watched them more. Eric is my favorite character (do I need to tell you why ;>) and the young vampire Jessica ♥ 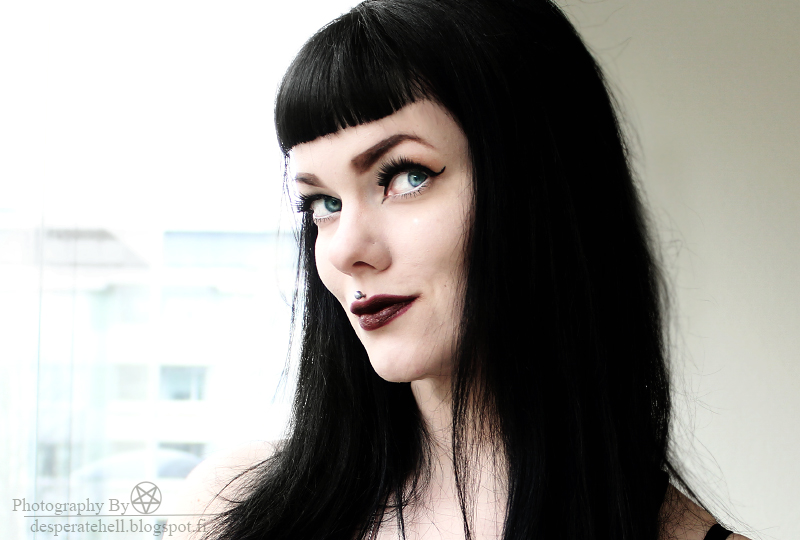 I've been dreaming of a fake fur coat already for a while and tried some of them in the stores, but I hadn't had the heart to purchase any of them. However Niina told me that she has one which she doesn't like to wear and so I managed to have the new coat into my collection.  Before I didn't care much of furs, but the mind as mine is always potential to change a direction and the love towards these fluffy garments was born.

Pants are also new ones which I got from Queen of Darkness.  I've worn them several times already now and I find them really good looking. They go well together with different garments and shoes. By the way speaking of the shoes, it's really nice that the snow and ice is nearly melt away and it's possible to wear high heals again! 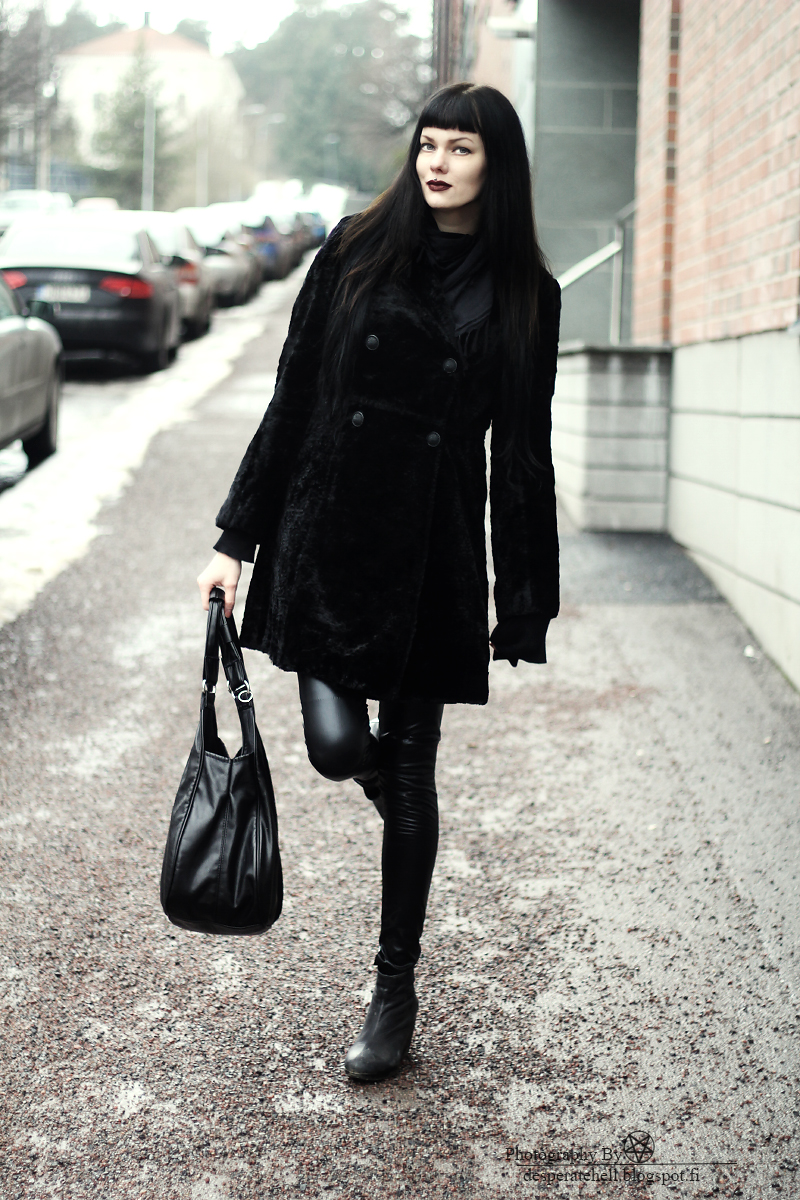 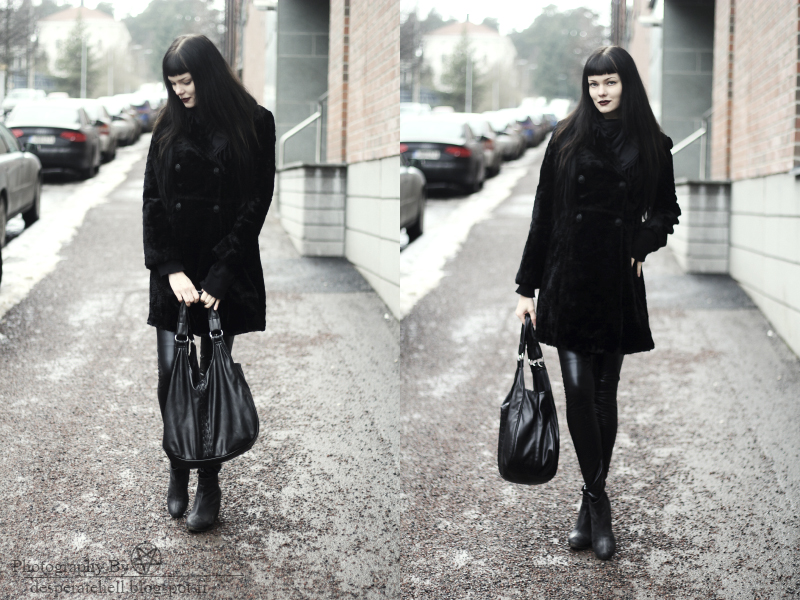 Last night I paid a visit to Yo-talo to see Turmion Kätilöt. The show was good as it's been each time when I have seen them playing live and yes I've seen them really really many times. The new songs sounded also great even though they were a bit unfamiliar to me.

Hello! I got a package from Germany the other day and it's a good time to show you the first item that bounded from the shipment of Queen of Darkness. A sweet little black dress with the lace details! It's the perfect dress for the summer. Simple, but very stylish and looks good even without any accessories. It's made of tricot and lace. There is a flexible smocking on back and cups on front so bras can be left home.  I was a bit insecure about the transparent lace part because I'm not used to wear the clothes that reveal the tummy. My concern proved to be needless, the dress looks good and the transparency doesn't bother me at all.

I wore this look the last weekend when I went to see a gig of Maj Karma and today I will go see Turmion Kätilöt and most likely I put this dress on. 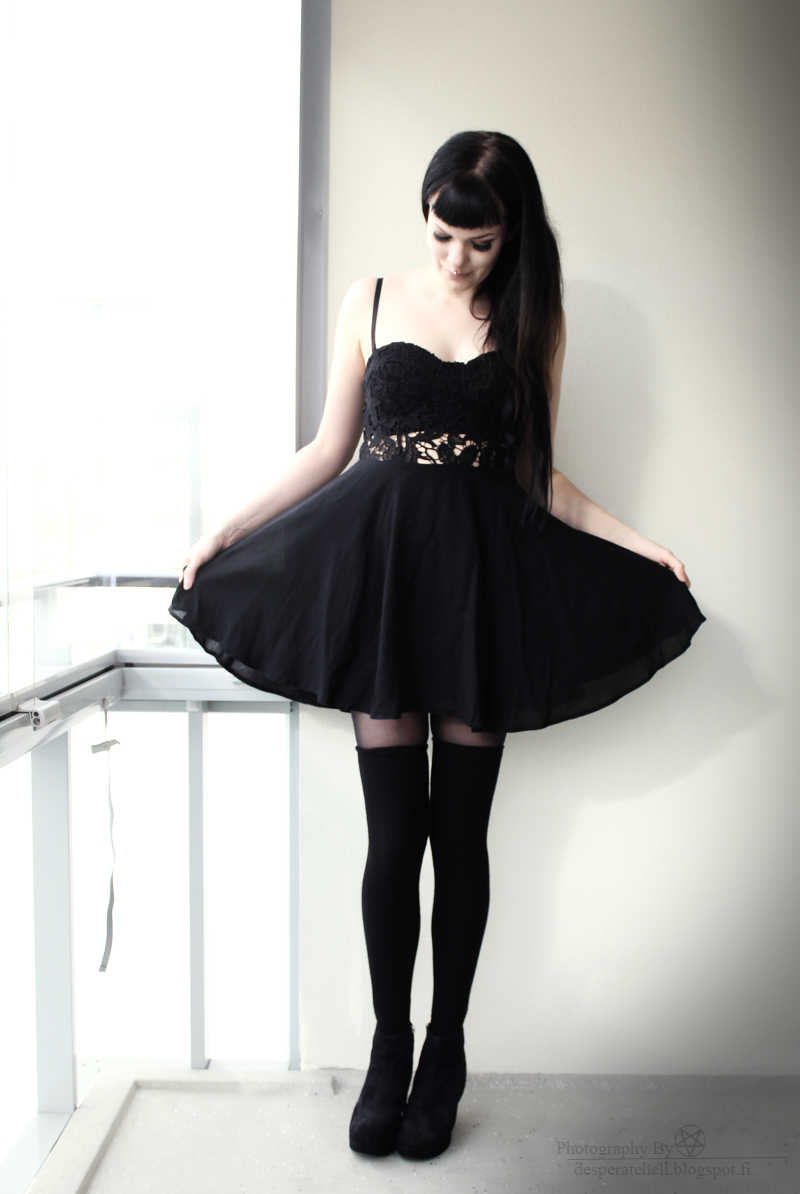 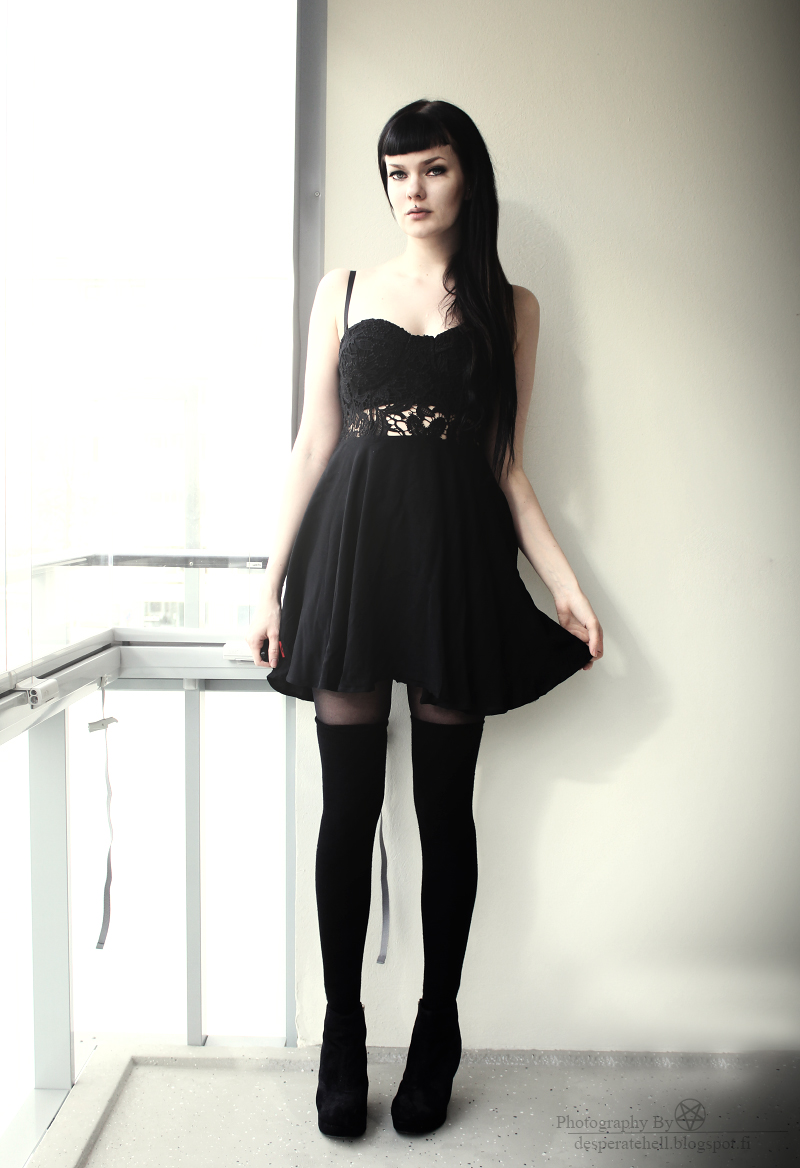 If you are eager to see  the original pictures of the dress, click here!
Lähettänyt Suski klo 9.21 8 kommenttia:

Finally I got them! The snow ball lights which be also known as Happy Lights. I've been admiring them for ages, but not until now I had the heart to buy them into my home. I love the shape of globe and these fit well into my decor. Besides they look good even as switched off. I bought the wire and balls separately to get the black and white combination.

A big decor fly has inhabited my soul and I've got one thing and another into my home. I ordered a new carpet and it should come during a week. In addition I bought three new decor pillows and there is a list in my mind what else I would like to have ;) Mostly textiles and beautiful framed pictures onto the walls. A black crow and a few deer skulls more would also be more as welcome. 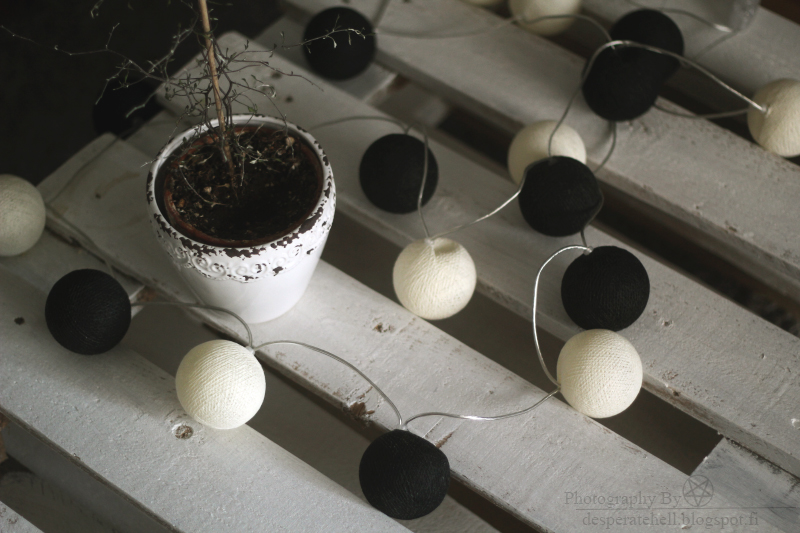 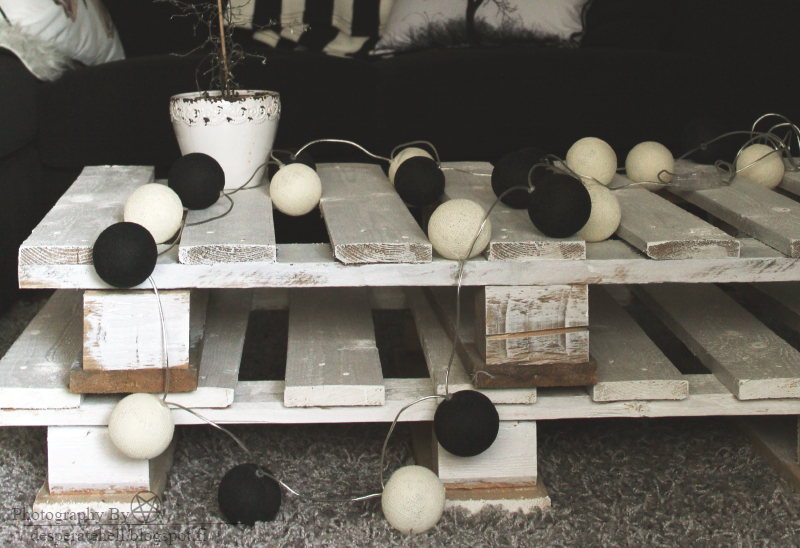 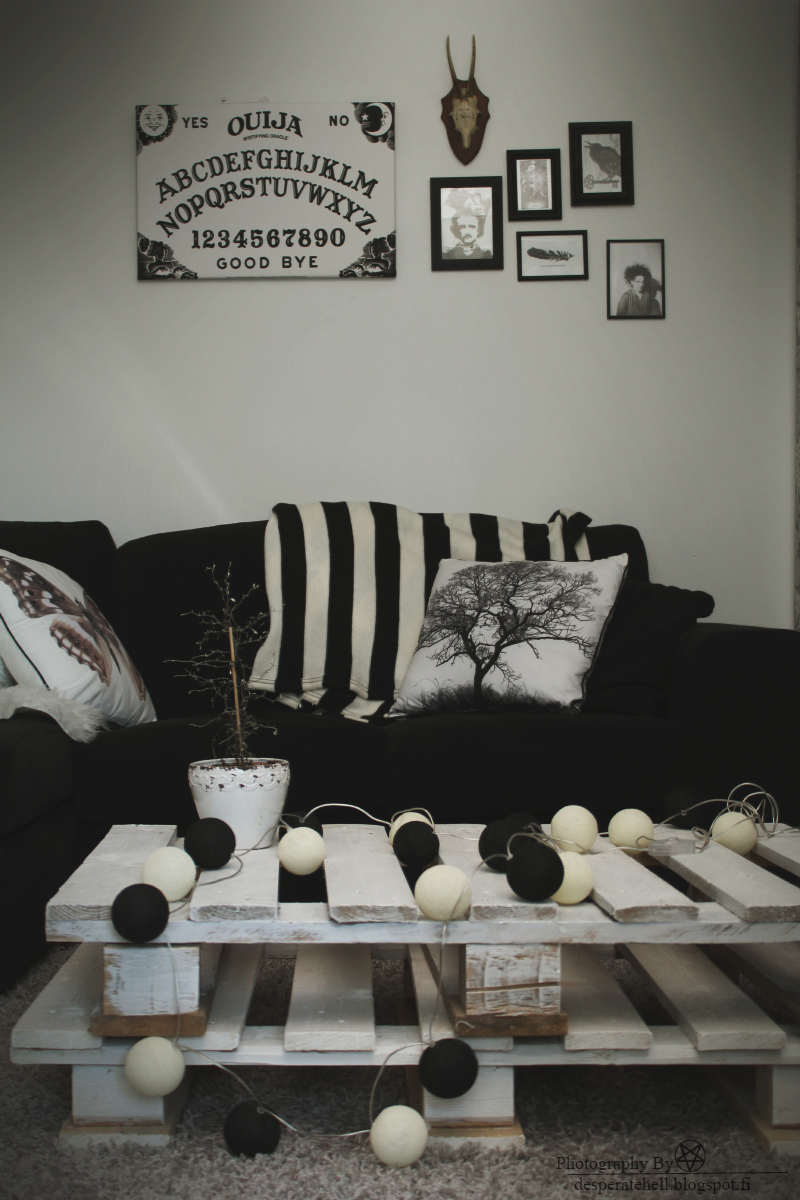 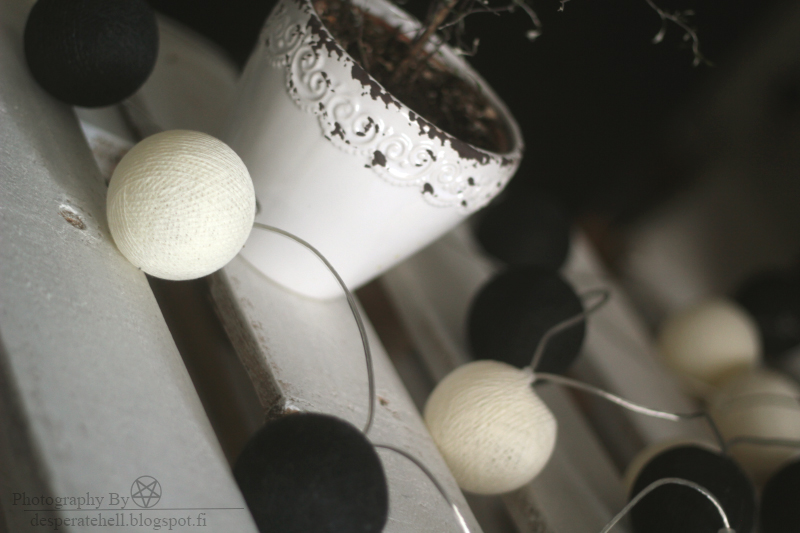 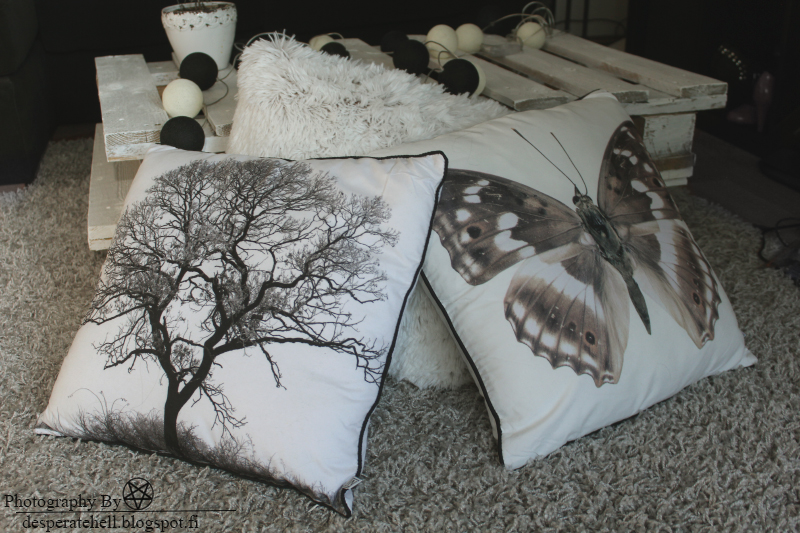 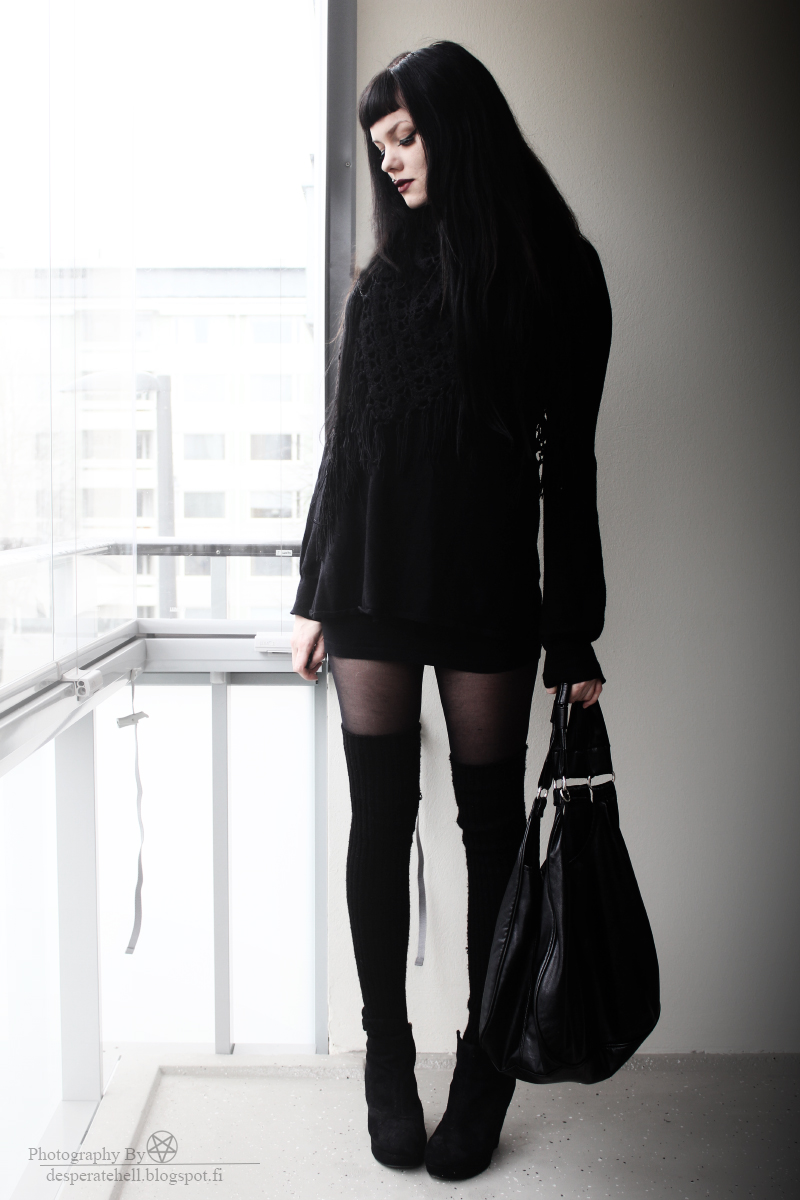 Hello! I've tried to keep my wallet tightly closed, but with no luck in that field. If I don't buy new clothes then I spend my money on make up or decor products even though I should save for the summer and coming journeys. Recently I placed an order to Punanaamio to get false lashes and some foundation and lipstick. I finally found a perfect dark red lipstick from Grimas which I've hunted for long time. In addition I bought City Color's contour palette from Ebay after hearing many recommendations about it. 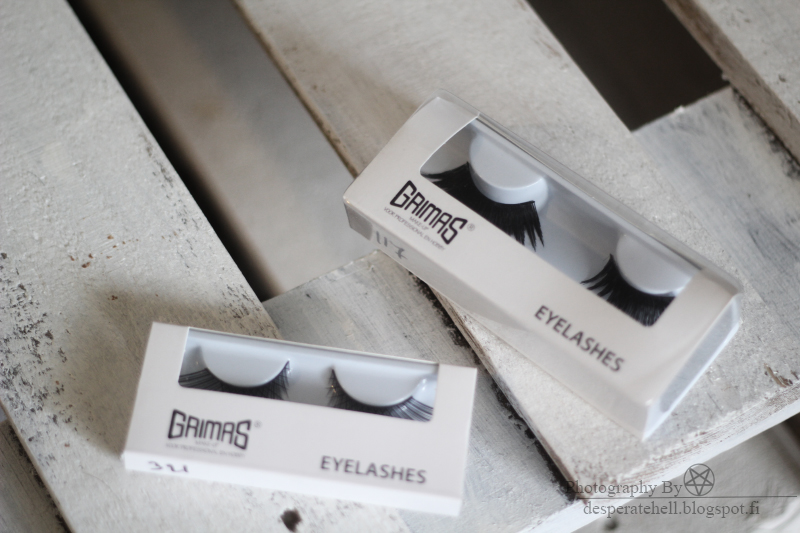 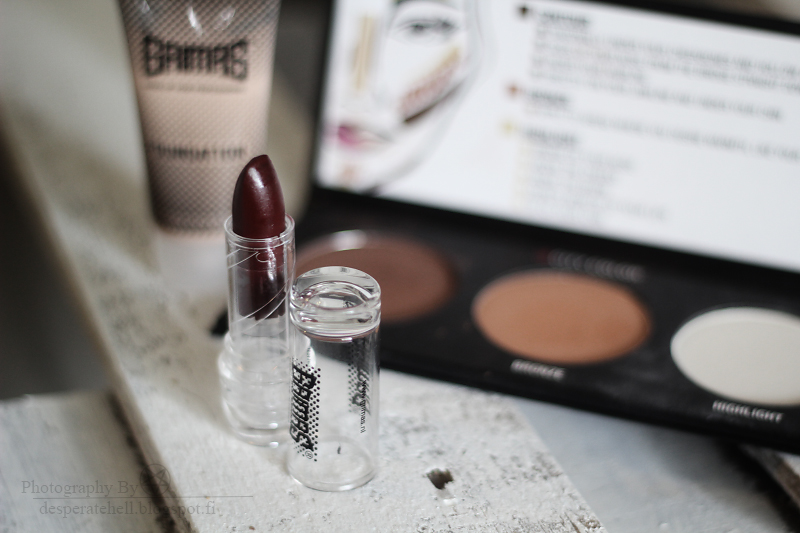 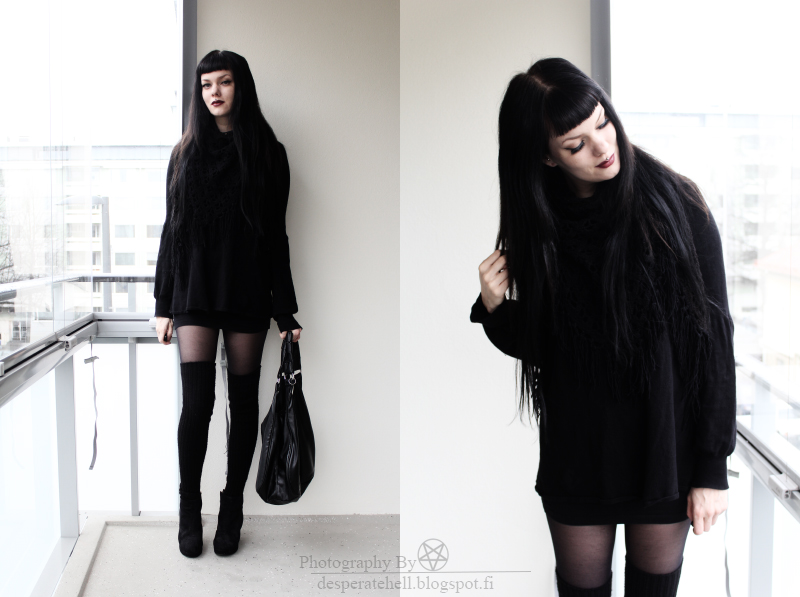 
Last weekend was hectic. I was working and went to see gigs of Hintit, Nykyaika and Nyrkkitappelu and the next morning I needed to be at work at six in the morning. Not the first time when I go to the work after minimal sleeping, but I survived well which is essential. Gigs were great and worth seeing. Tomorrow I go see Maj Karma and can't wait for that. In addition I also went to ice skating the last Sunday for the first time after years. It was awesome though ankles were about to die at first. The next winter I try to skate more when there is the ice skating field around the corner. 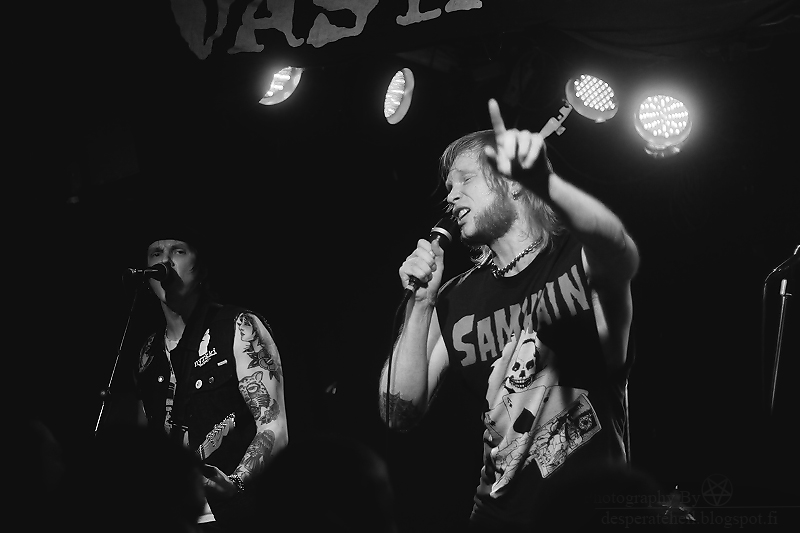 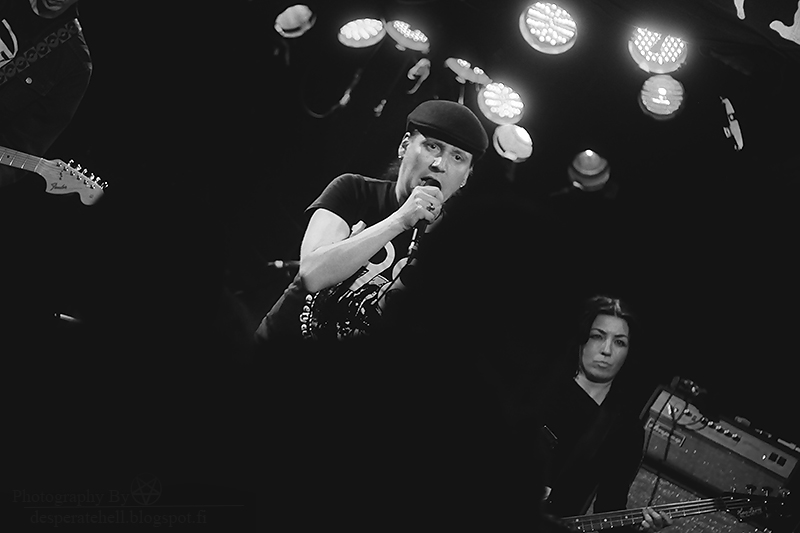 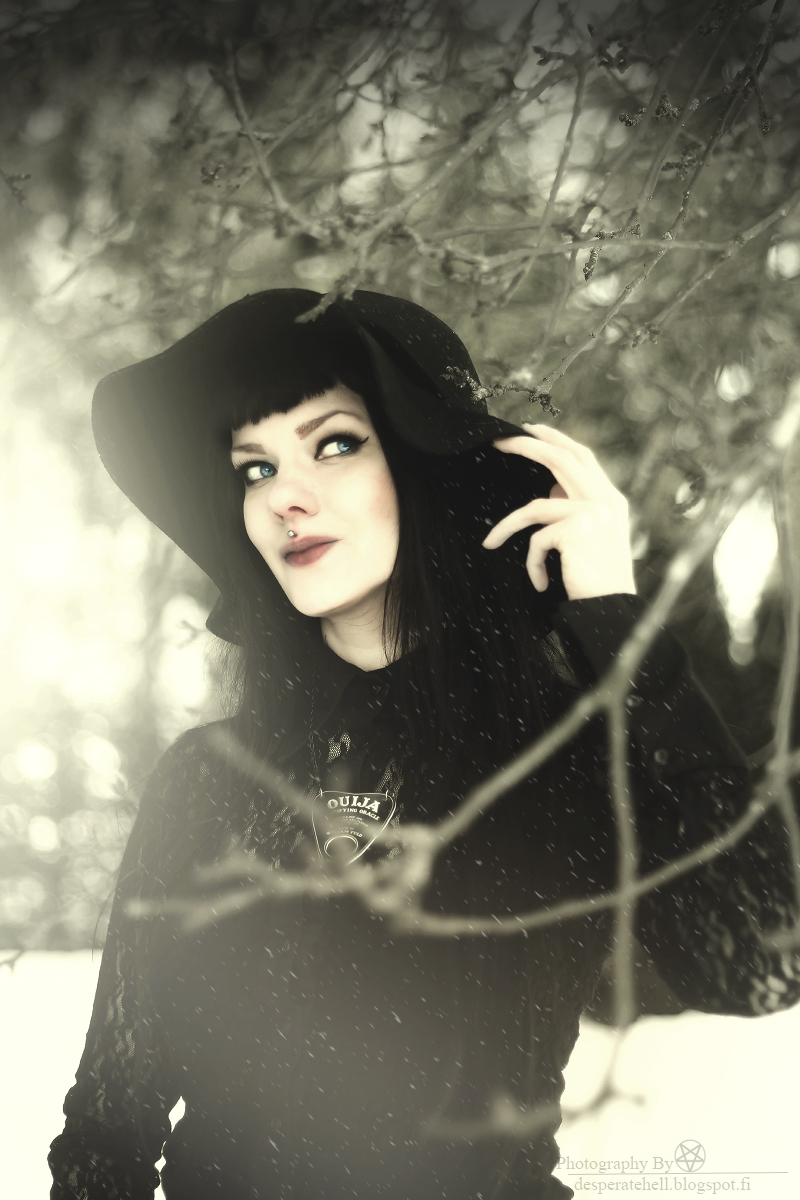 Let's see whether these the last winter pictures of the year therefore the snow fades away and the recent days have been quite vernal. Kind of convenient, can't wait that the ground is melt and can wear the high heels and lighter clothes. 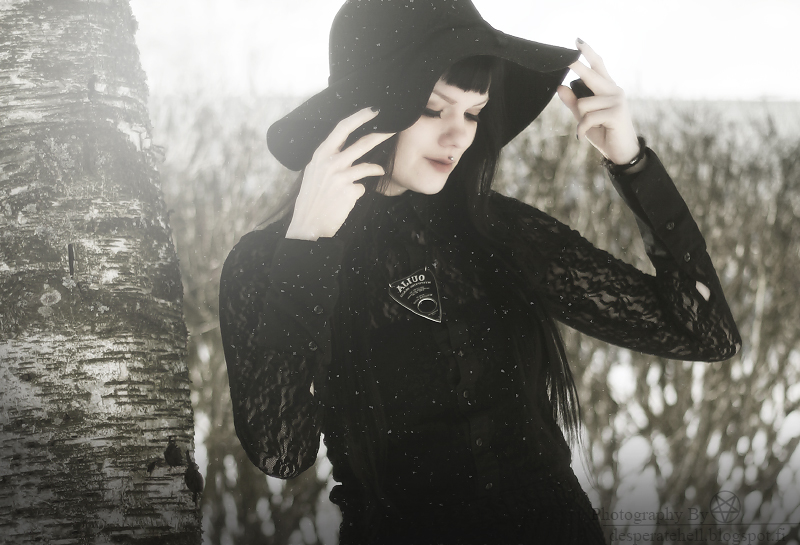 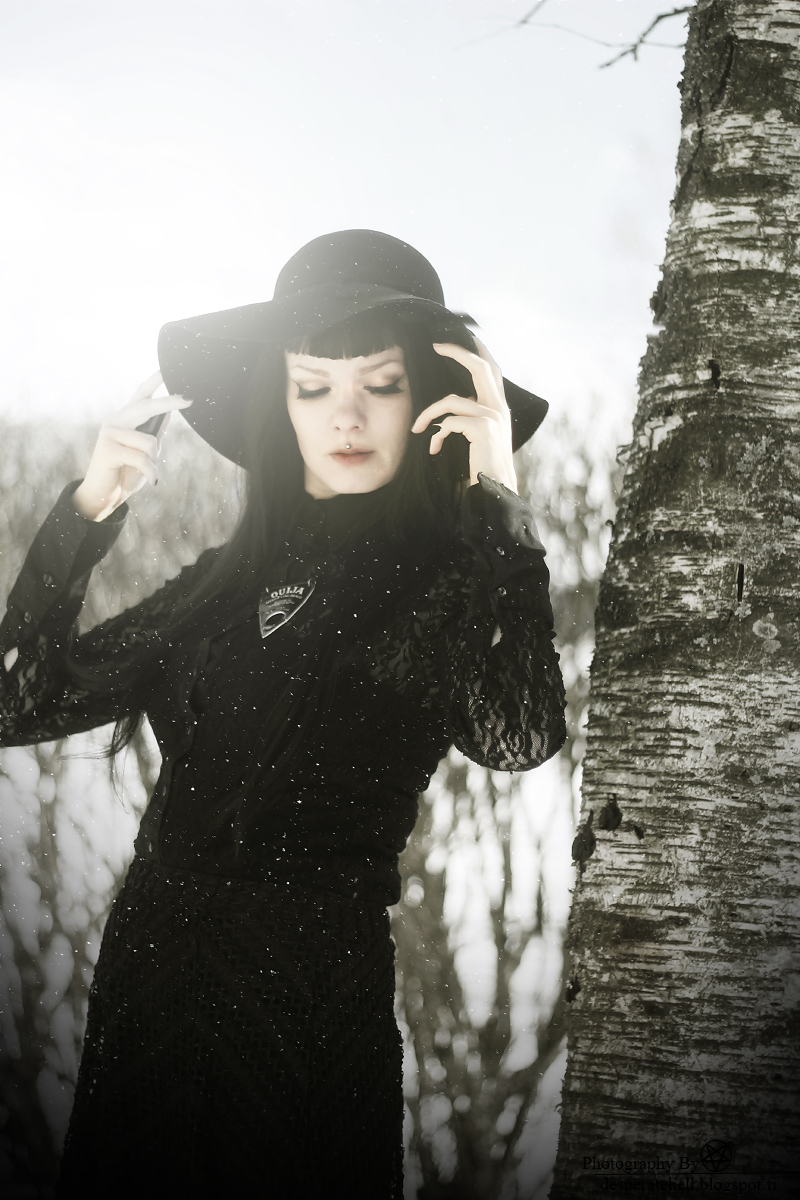 I'm waiting for the Easter. Then I have a few days off actually seven days which is good. The coming weekend goes at work so not special plans except there is a few gigs I would like to go see. Hope you all have a nice weekend. I start to prepare myself for the work.
Lähettänyt Suski klo 8.37 4 kommenttia:

Hello! The week runs to its end and I decided to update an outfit from the week. The mind yearns a change of scene therefore I've spent for the last two nights by writing study articles and they begins to oozing out of brain cells.

Here is the outfit I wore this week. Obviously those simple black outfits haven't managed to occupy my taste  completely because I chose to put on something which is not made of black tricot. Both a lace shirt and skirt are second hand findings and a headpiece was bought from WGT. Those lovely boots are from Pennangalan and I wear them too rarely if  I think how gorgeous they are. Jewelries are from Etsy except that bird's skull is also bought from Agra hall. 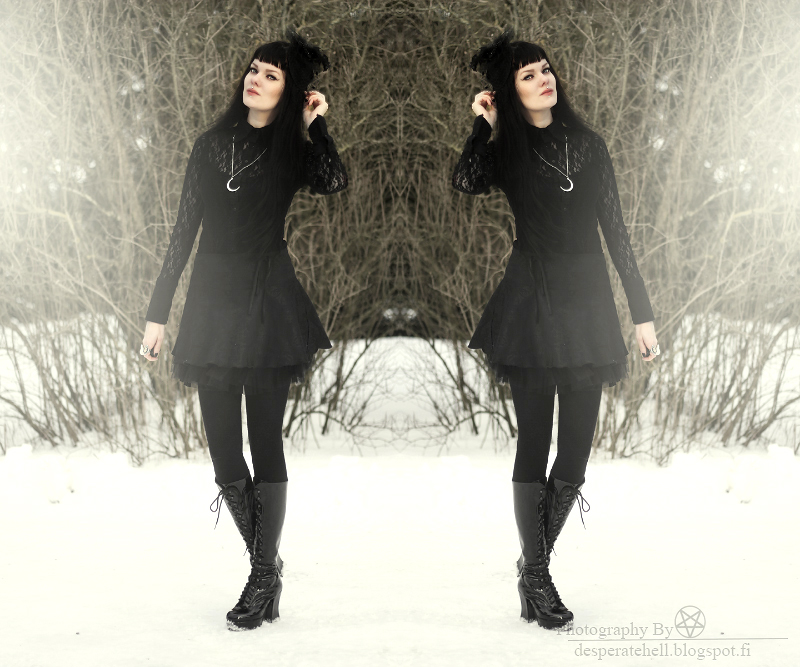 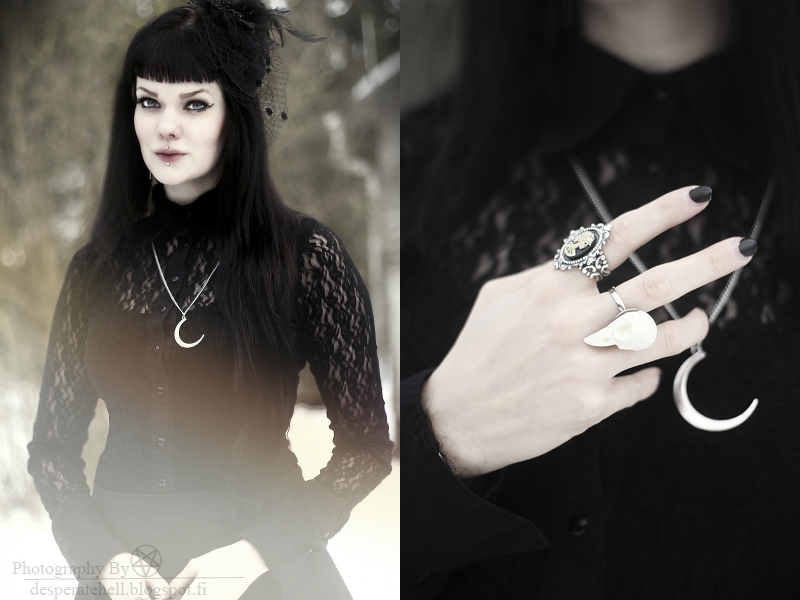 I have spent the time by sewing and I nearly managed to finish a new wool coat. The last finishing and buttons and it's all done. I try to take pictures of it in coming days to get to introduce it you. How I always succeed to sew the winter coats in the spring when the winter starts to be over? This is not the first time and probably either the last time.

Otherwise the week has gone nicely, but too quickly. I returned back to home on Wednesday and it feels that I haven't done even half of that I planned. On Thursday night I drop a visit to the bar with the other half. Acoustic music over a beer or two was relaxing way to spend the night.
Lähettänyt Suski klo 19.07 10 kommenttia:

February turned to March and the summer is closer a day by day. I enjoy the winter time, but I'm also happy that the light is increasing and the days get longer. I counted today that there is only nine weeks left until my summer vacation begins. It's nothing and goes fast and a journey to Wave gotik treffen comes also then. Can't believe that the time has flown this quickly. The last summer just faded and now the next one is already behind the corner. 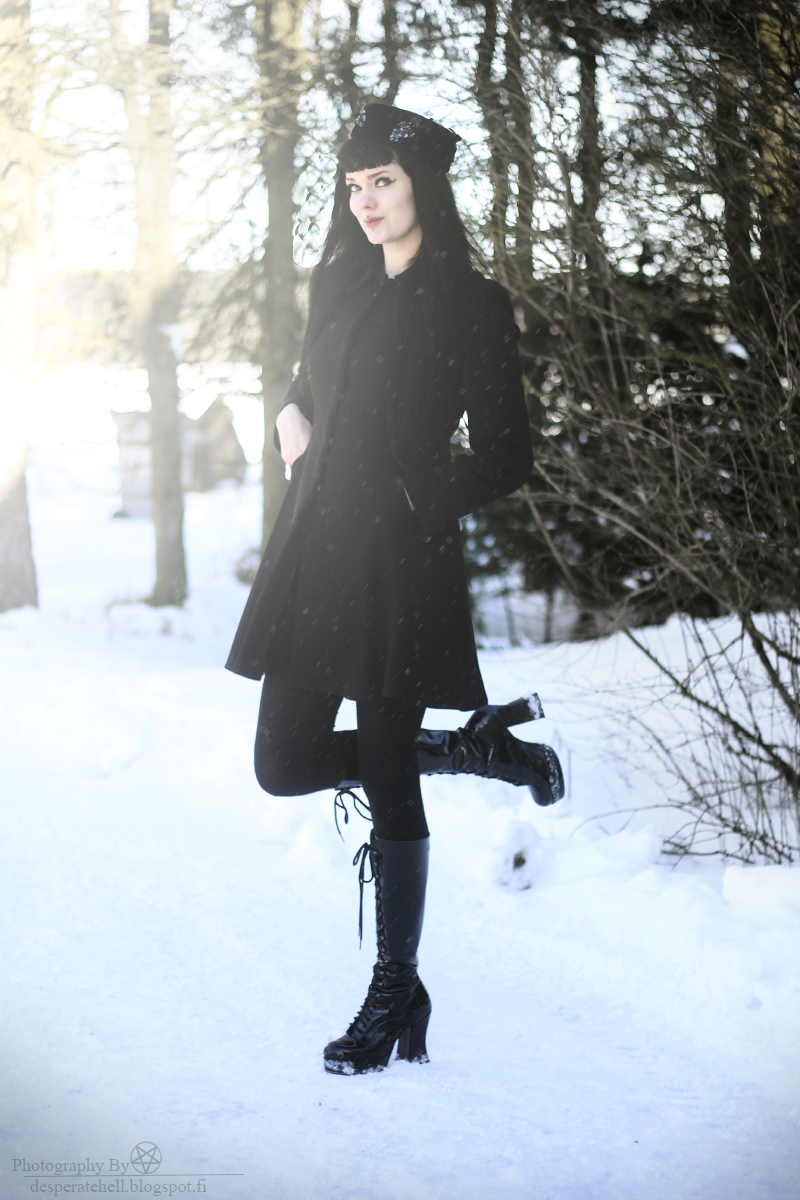 My yesterday's look. I found that headpiece while re-organizing goodies at home the other day. I bought it years ago at a good price when I still owned dreads and I was totally forget that I have it. 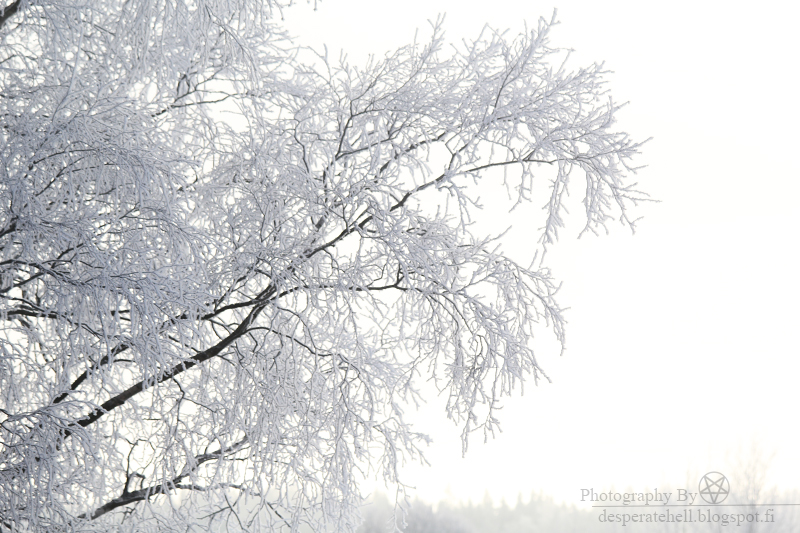 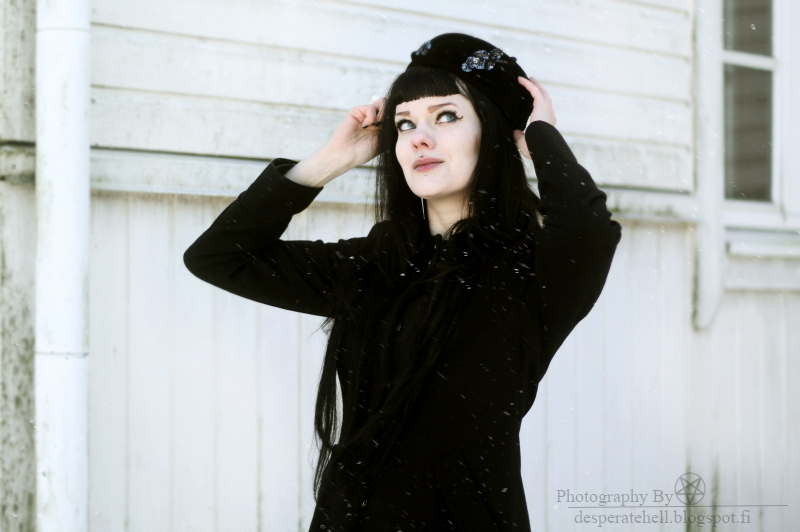 It was a really beautiful mist yesterday in the morning, but unfortunately it succeeded to disappear before I got myself out. I took a few shots through a window and went to drink a cup of coffee to downstairs and it was gone. I have done a lot of photography for these two days. 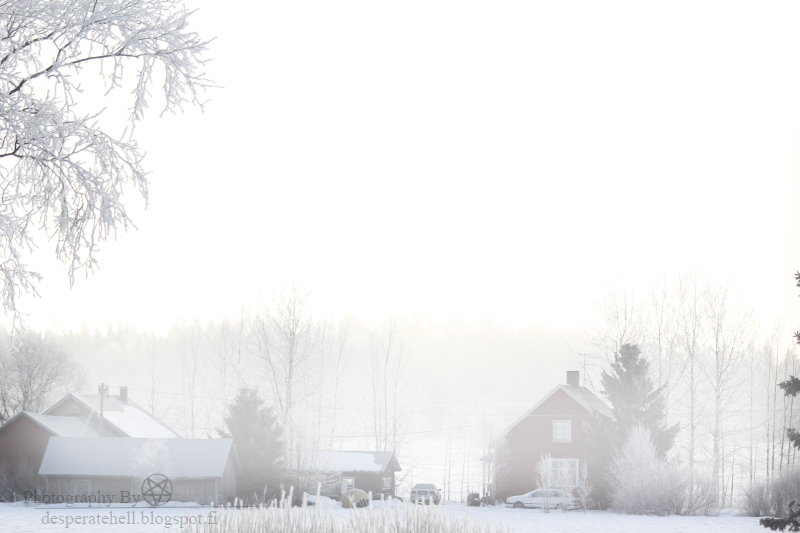 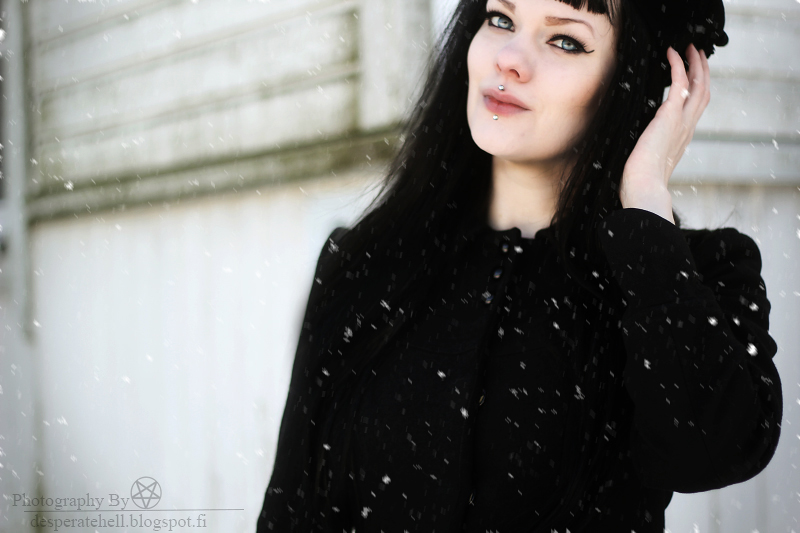 Hope the new week has started well in you all !
Lähettänyt Suski klo 18.01 6 kommenttia: