Out of this gloomy light

My attire when we paid a visit to a goth flea market which was arranged today. 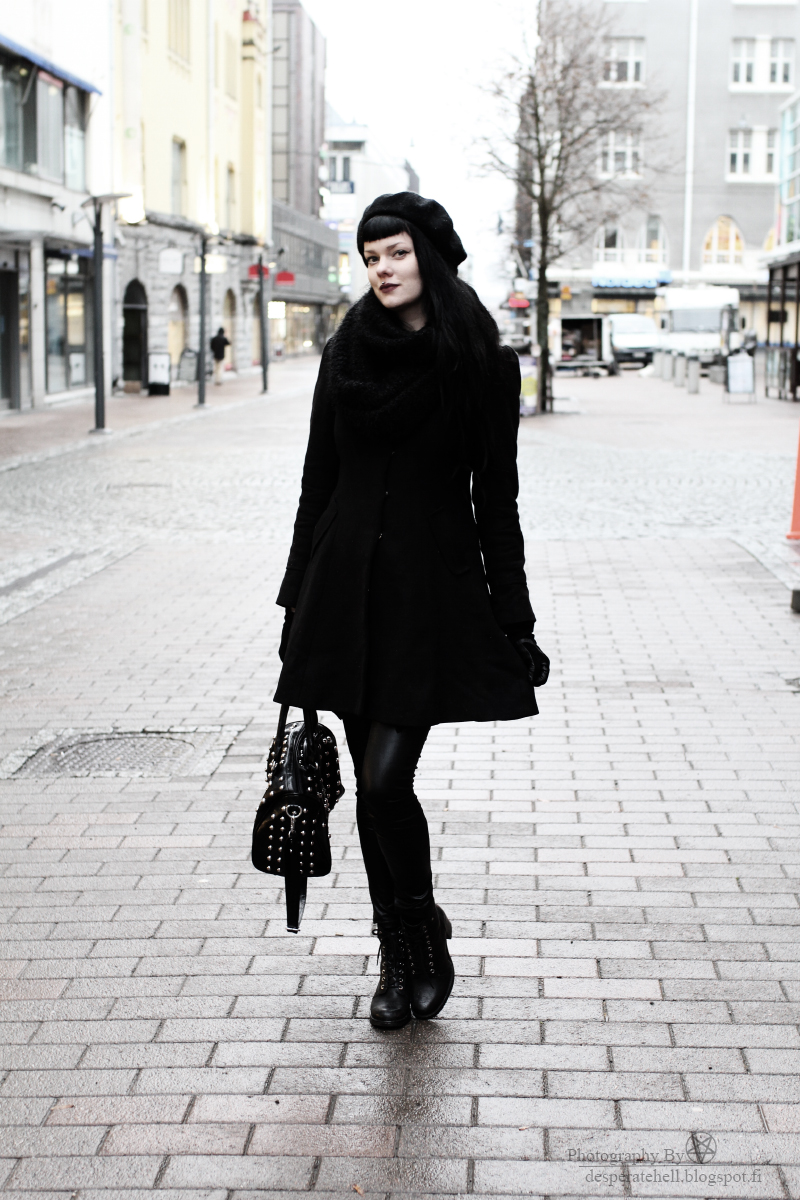 I saw today a conversation how to dress in winter time as a goth. My advice is quite simple: a lot of layers and use black! I have several overcoats and it depends on degrees of frost which of them I wear. This one which I wore today is one of my favorite. It fits perfectly to my body type and I like to wear it quite often. To be honest I have worn this look a lot during the recent weeks. A tube scarf is warm and quality suede gloves save fingers. Good looking shoes give a lot to the outfit. I prefer understated ordinary shoes often these days, but if you want to look über goth why not to wear something more goth? Most goth boots are too slippery for winter, but it's not a big thing to bring them a cobber and get better bottoms. If thinking closer it's really not a big problem to be a goth  in winter, it requires some arrangement not else.
Lähettänyt Suski klo 20.08 7 kommenttia: 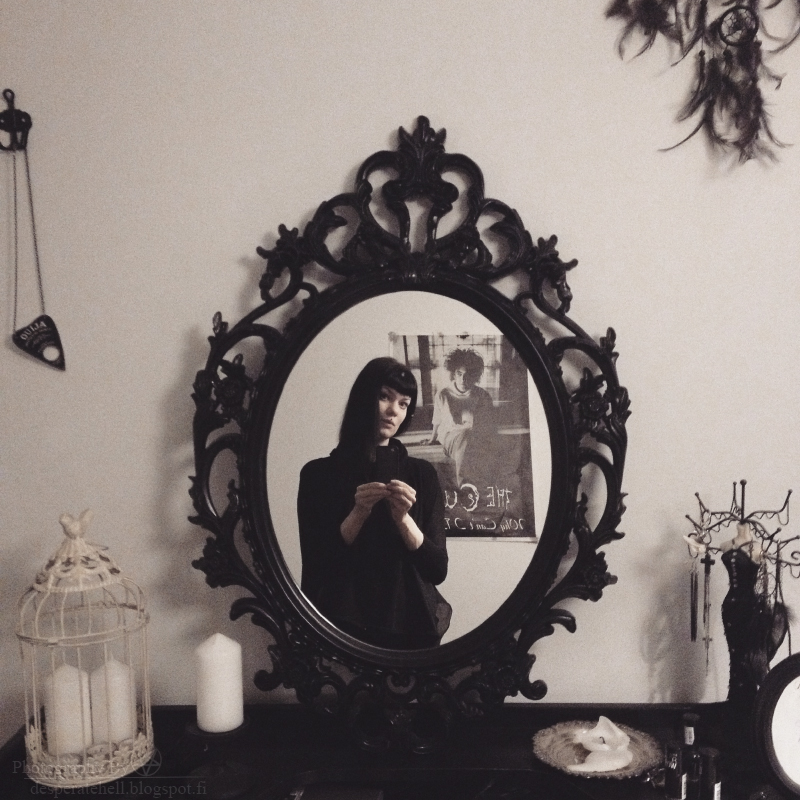 I put on a poncho from Queen of Darkness which is the casual choice. One of my favorite garment. 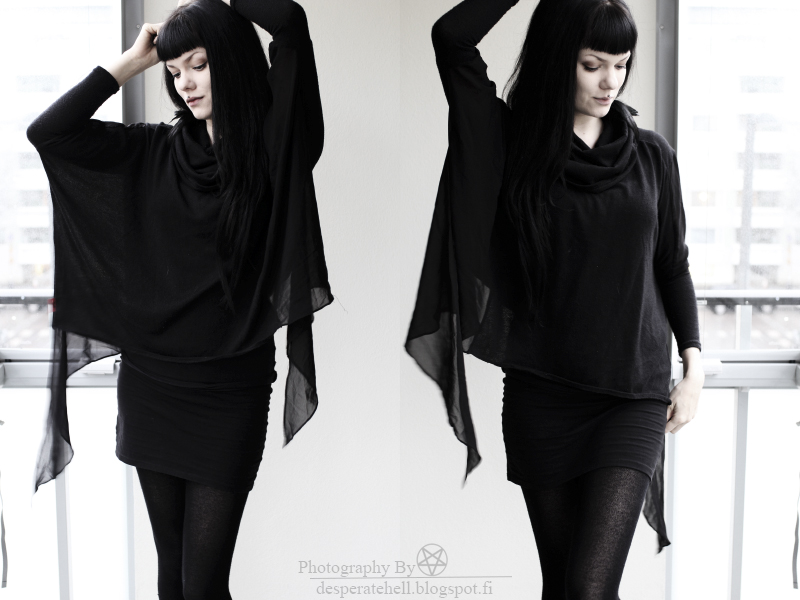 I heard today that I have a few days off this week which certainly makes me glad. That knows what else than quality time with my sewing machine. A few projects have been haunting in the labyrinth of the mind and now I have time to start  to carry out them. I also booked a journey to Wave Gotik Treffen which also creates  a big smile onto the face. This will be our third time there! In spite of the rainy and gloomy weather this day turned out to be quite nice.
Lähettänyt Suski klo 23.10 Ei kommentteja:

Eyes get used to the darkness

An attire from Sunday which happened to be my only day off in this month. I put on a pencil skirt which is from a flea market like also a bag. T-shirt is a finding from WGT journey and I love it! 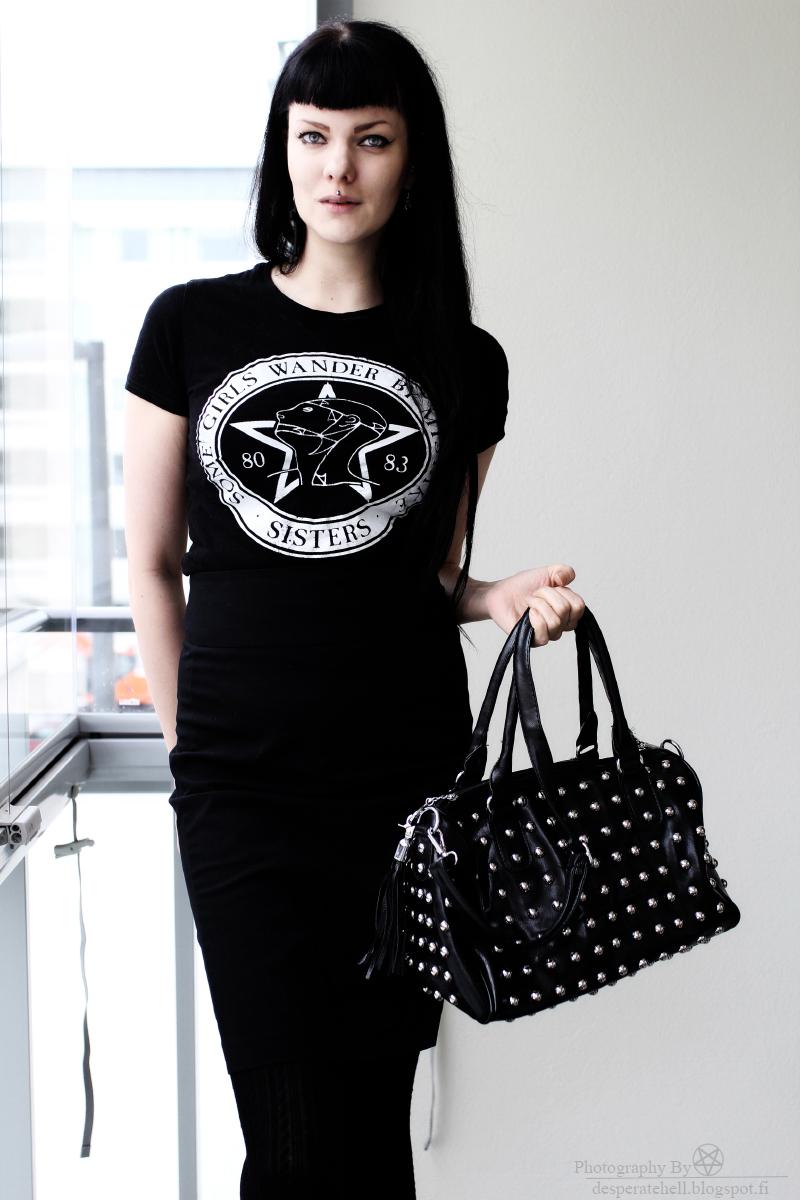 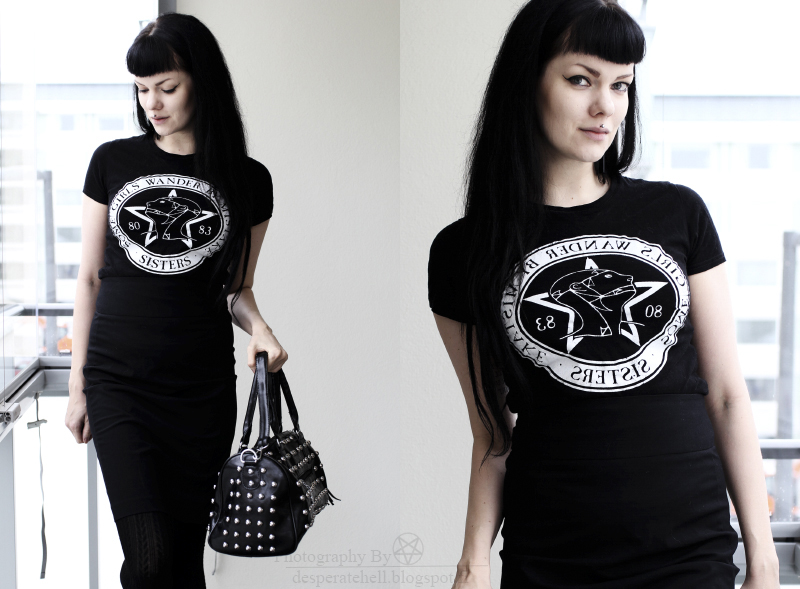 A need for create something by hand increases a day by day. I'm looking forward a vacation which comes after four weeks. Right now it's nearly impossible to find time for sewing or drawing and those are the things that I would like to do. Today I visited a fabric store and bought some materials which are waiting for the right moment. I should definitely take hold of myself and sew more! Recently a lack of spare time has created a barrier between me and creativity, but that's temporary. I have also prospered pretty well at the gym so that's also steals my time.

Hope you all have had a nice week and I wish you a happy weekend!

A short post about the goods which I purchased today. As I mentioned I need the boots for winter and I ended up buying these laced heels which are made of a real leather so let's hope they will go through many winters. I proved several shoes, but these were the sweetest ones although there would have been some other nice too. Good thing is also that these were discounted so perhaps I will get another pair more later ;) 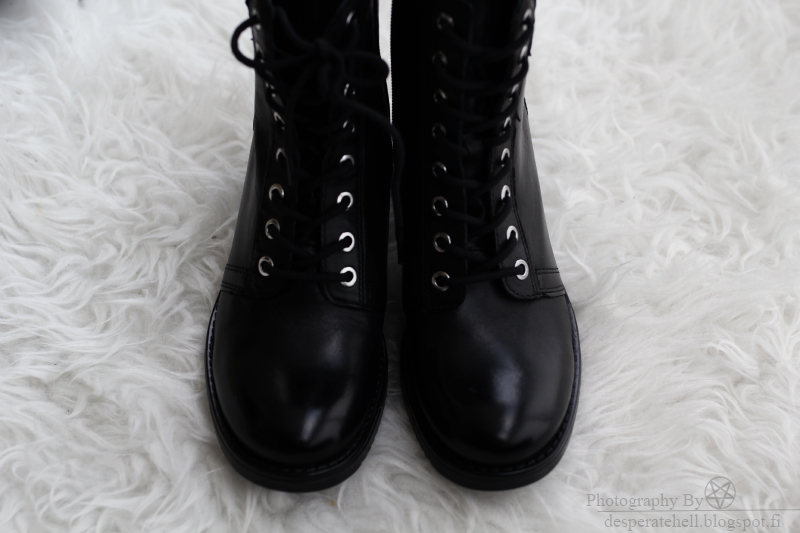 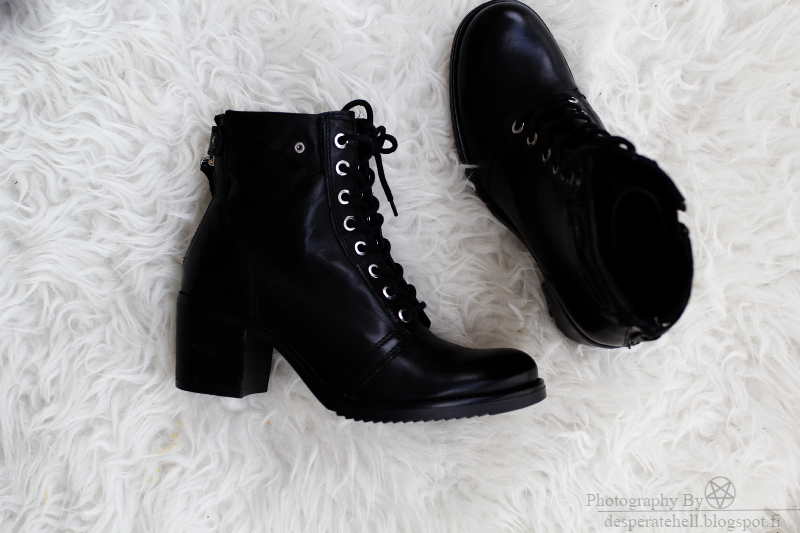 I also found the new suede gloves. I managed to lose my old ones when I was photographing and quality gloves are must have in winter time. 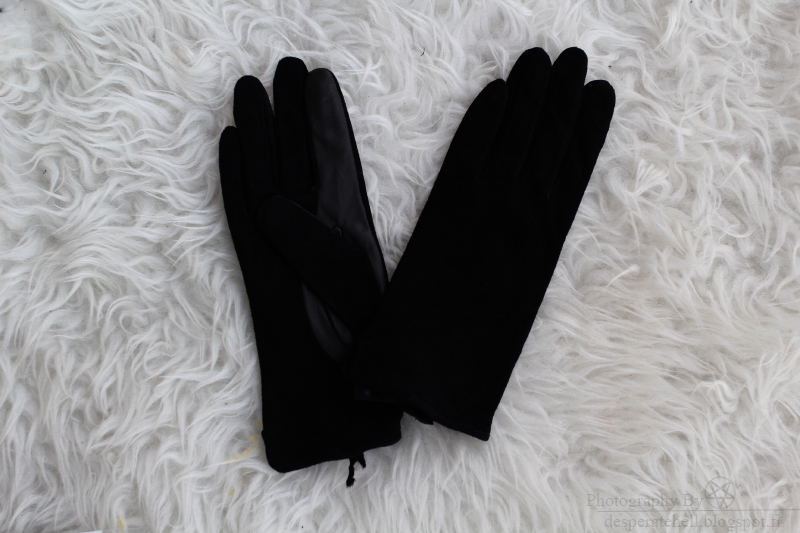 New earrings were extempore purchase. I watched these already earlier, but didn't have a heart to buy them. However I thought they are so pretty that I have to get them. 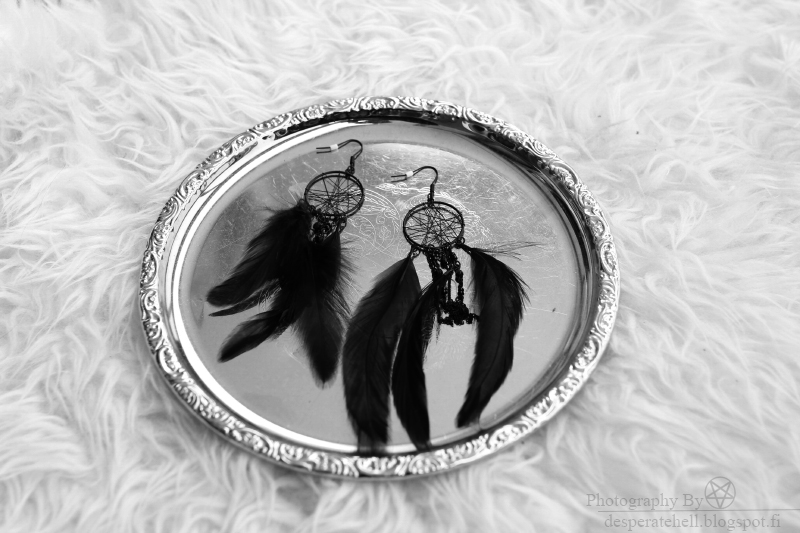 Beyond the dark veil

The things that were normal before feel abnormal these days. As you may know it was quite conventional to immortalize a picture about a dead relative in the 19th and 20th century. People were willing to have a last memory about a person who was left this world behind. The pictures were often taken  together with a family where the deceased was among the living and these pictures were also displayed. Even people who wasn't rich invited a photographer to home. Nowadays the people photograph their dead relatives quite rarely and it would be macabre to see the picture about the dead on someone's wall. There is several reasons why people have forgotten the habit as urbanization, wars and the death is institutionalized. Nowadays people don't see their dead relatives because the professionals are taking care of them. The death is kind of a taboo and we want to remember our loved ones as living.

Why I'm talking about the subject is this interesting art book which I bumped ages ago and eventually wanted to have it into my own book self: Beyond the dark veil: Post Mortem & Mourning photography from the Thanatos Archive. 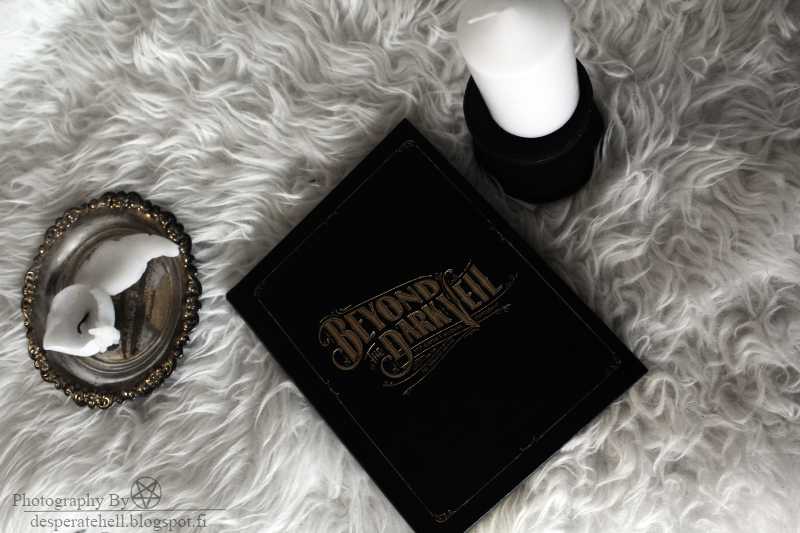 The book contains old quality vintage photographs about the people and also about the animals. There is interesting stories behind these pictures for not all demises were natural. 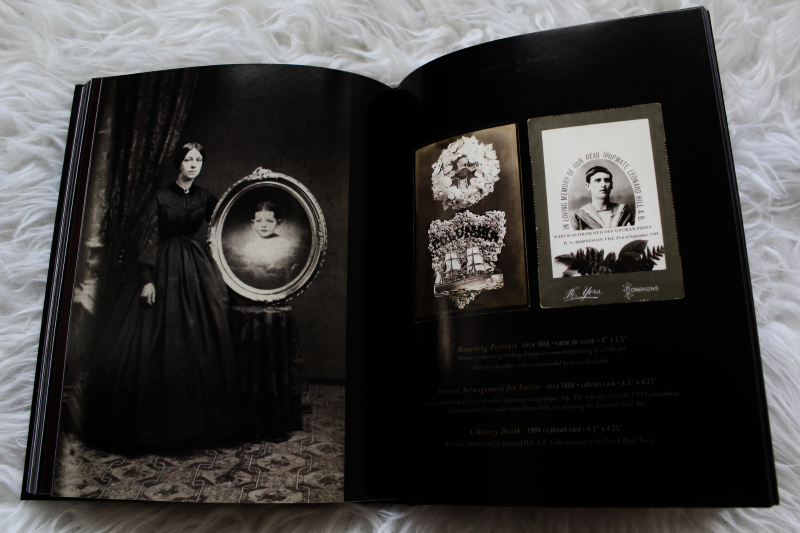 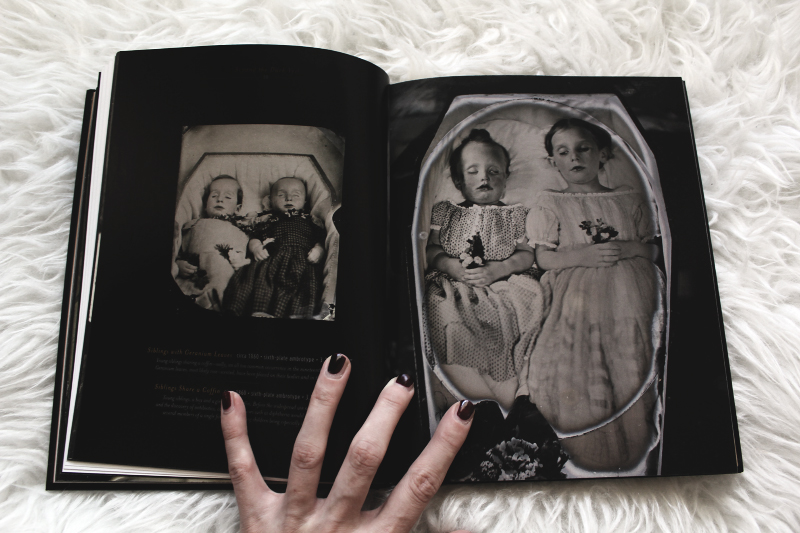 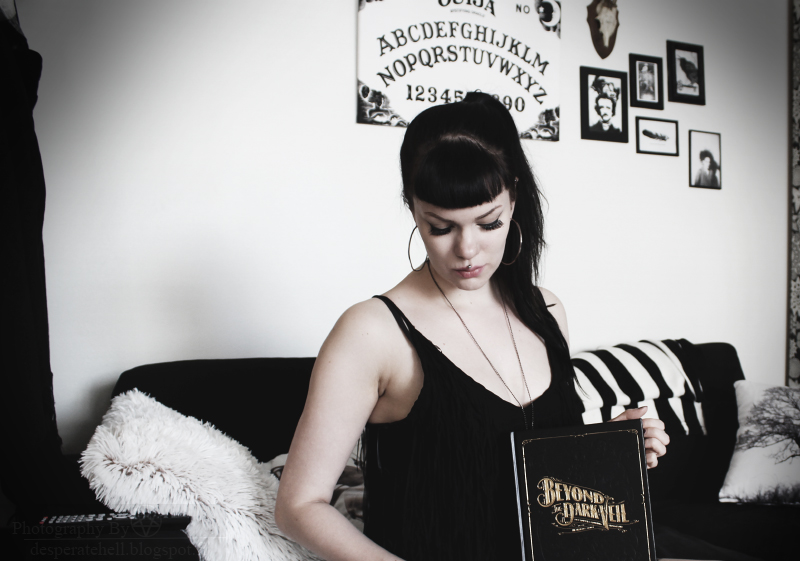 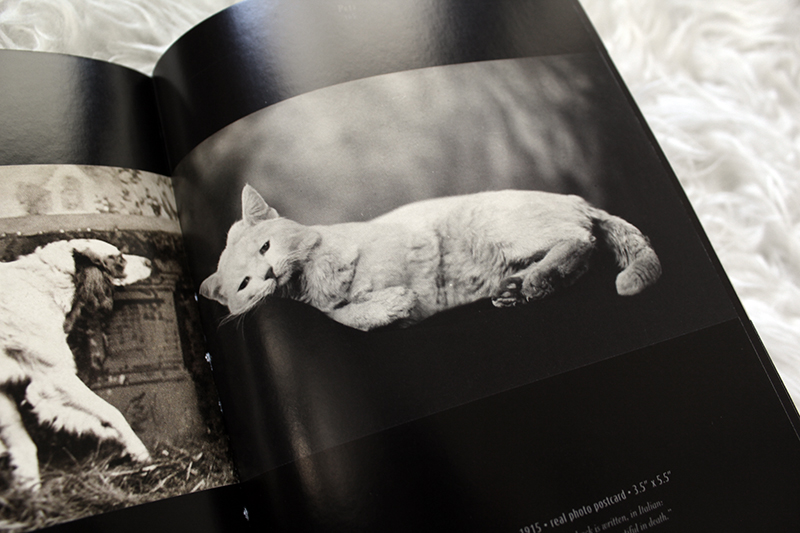 My own favorite is the picture about Kellers: Three in one casket because that hides a shivery story. A woman killed her husband due to his misconduct, and their baby, and in the end herself. And in spite of all they were buried together. That's odd! 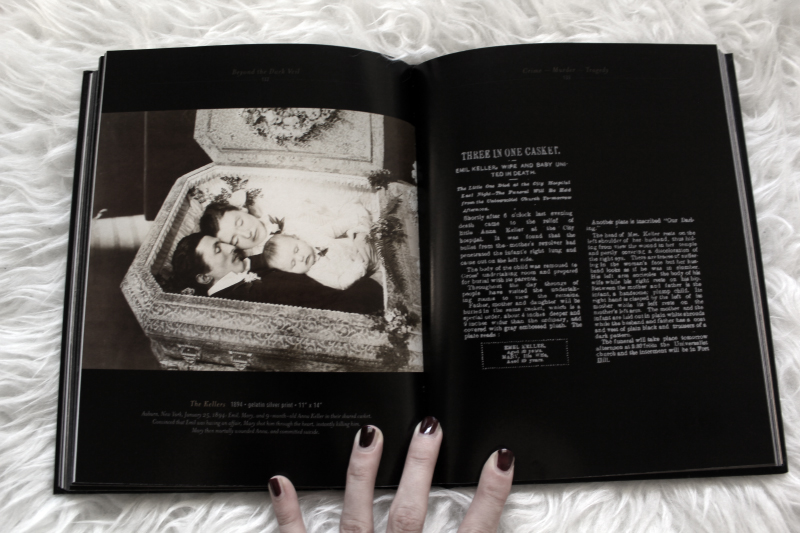 I decided to share this book with you because I thought there might be people who want to hear about it. I also understand if some of you think this is too much, and I'm sorry if your eyes saw something they didn't want to.
Lähettänyt Suski klo 18.52 10 kommenttia:

You want it darker

The other day I wrapped this lovely self made poncho around me. It's an eye candy, but slightly impractical with the overcoats, but I don't mind. Something black, graphic and simple what else I could need? Well a lot. My old combat boots are ready to be buried and yesterday I visited a few stores through to get the new ones, but with a bad luck so far. It seems to be a challenge to find the decent winter boots which looks good. I bumped into some pairs which looked nice, but they were  more for the fall. I would like to have a pair of combat boots, but also some leather boots with a small heel would be more as welcome. I have also done a bunch of clothing sketches because I also need shirts or dresses with the long sleeves. Time to update a wardrobe and shoe collection. 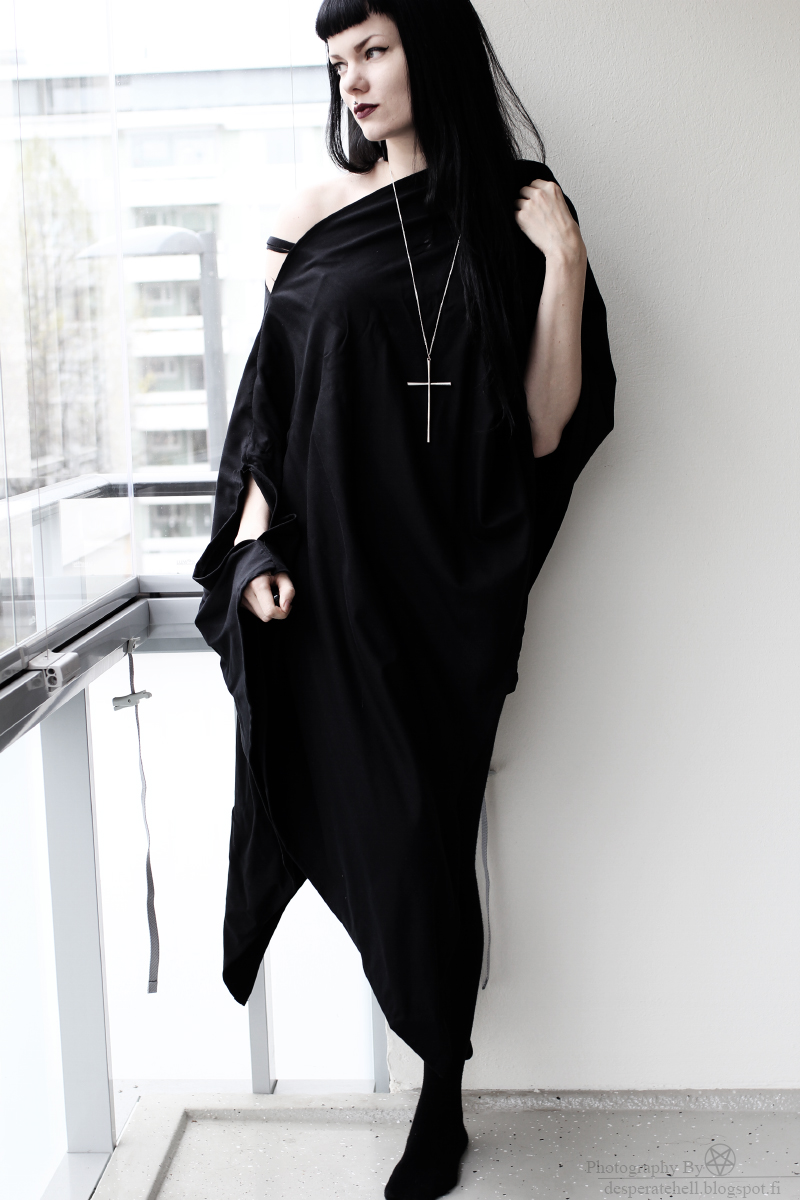 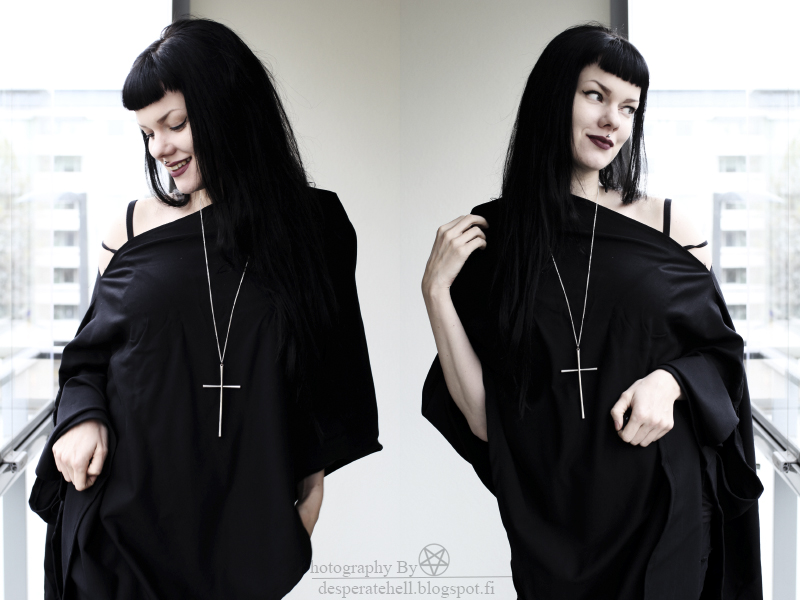 Speaking of the eye candy here is something ear candy to you. I have listened to a lot Leonard Cohen recently and his new album is gorgeous masterpiece. A voice behind the grave goes through a soul.

A day as everyone else, but today I change a decade. Thirty it sounds crazy, but truth it is. Time flies quickly the past five years have disappeared in a flash and that makes me feel a bit uneasy. Sometimes, fairly often I  hope I could stop a movement of a clock hand and just focus on the existing moment. Whirls of a hectic life, I guess, make it happen that the time runs in a speed of light. 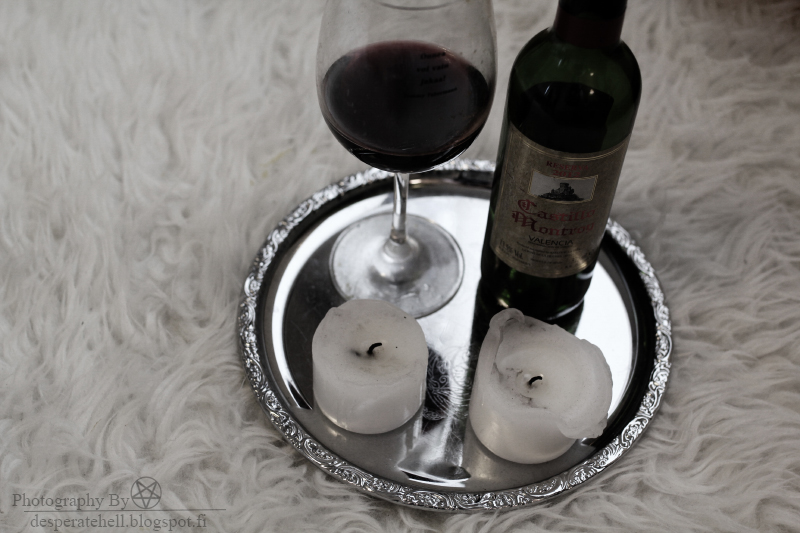 Recently I have stopped to think of my past life for the last ten years, what has happened between these years since I was twenty and now. I remember well when I turned twenty. My life was quite chaos those days. I was living in a wrong place, I was surrounded by the wrong people, I was dreaming of the better life and I was fighting all the time with demons of the mind. I'm happy those days are history and I feel so much better these days in a physically and mentally. I have also thought of the things I have achieved and I can be pretty happy with myself. I'm currently living in a city where I want to live. I have a really good apartment, I have a job, I have studied a lot, I have been together with my sweetie four years soon, I have got a change to see the world and live abroad and many other things! Hope this next decade will be at least as good as previous or even better.
Lähettänyt Suski klo 16.14 10 kommenttia: