It's been too pretty weather for blogging, that's why I've pushed this post towards the future and spent my time rather on the beach than with the laptop (very ungoth, I know). However perhaps it's time to open you my journey shortly and tell you how everything happened this year. And yes I do had  a lot of blast.

Again it was time to travel to Leipzig into that city which is situated in Eastern Germany and starts to be quite familiar to me. After waiting for many months it was a high time to participate in dance of the death. We chose to travel again via Berlin because I think it's the most comfortable way to get to Leipzig from Finland. Although the train tickets are bloody expensive there we decided to take a train from Berlin to Leipzig. But when coming back we chose the bus instead which was much cheaper, but the journey took longer and there was a street maintenance going on and due to that the bus was late over thirty minutes.  The bus was okay too and it went straight to the airport, but perhaps the train is more reliable in Germany when you never know if there is a traffic or accident on the autobahn and now there was both and we had to get to the airport in time. Fortunately we did.

We arrived on Thursday as always and this time we opted a different hotel and it was fairly interesting experience! I knew the area where the hotel was supposed to be located (Augustusplatz) and we walked there from the main station and what was waiting for there? A building state! My heart nearly stopped beating and all horror sceneries appeared to the mind. Wait what where is that hotel, there is only a big building state and no hotel at all. We strayed there for a few minutes until a friendly goth couple came to tell us that yes you are in the right place, the hotel reception is in the van! Okay everything cleared and the hotel staff was very friendly. They told as that the hotel was pure new and they still have frontage undone and some rooms also and some corridors. And yes the fresh paint smelled when the guy brought us to the our room which was very neat! I have never bunked in the room like that. Really pretty and stylish with a kitchen and  a nice view. And we got 50% discount because of the renovation. Actually we had a quite good luck! I already thought that I was hoaxed and the hotel does not exist at all. I've read stories about the situations when someone  books a room and when she arrives there is nothing. And I knew that all hotels are booked during the WGT so it would have been quite difficult to find another room.

Thursday went and Friday came. This year we definitely wanted to visit Kirchenruine Wachau. I have admired the pictures from there and I wanted to see that place through my own eyes and it was magnificent that I can't find the words to describe it! Why we can't have anything like this in Finland? The pictures speak themselves: 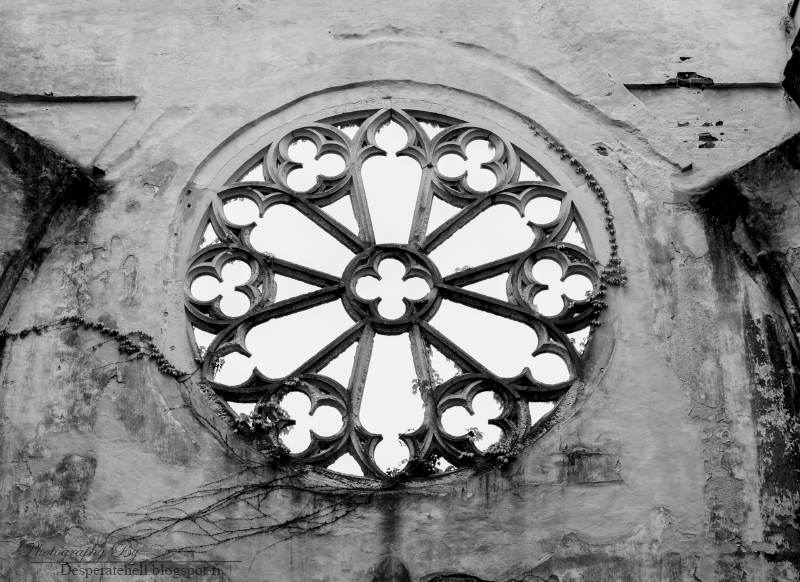 An old ruined church, but I wondered that there was quite fresh graves though. 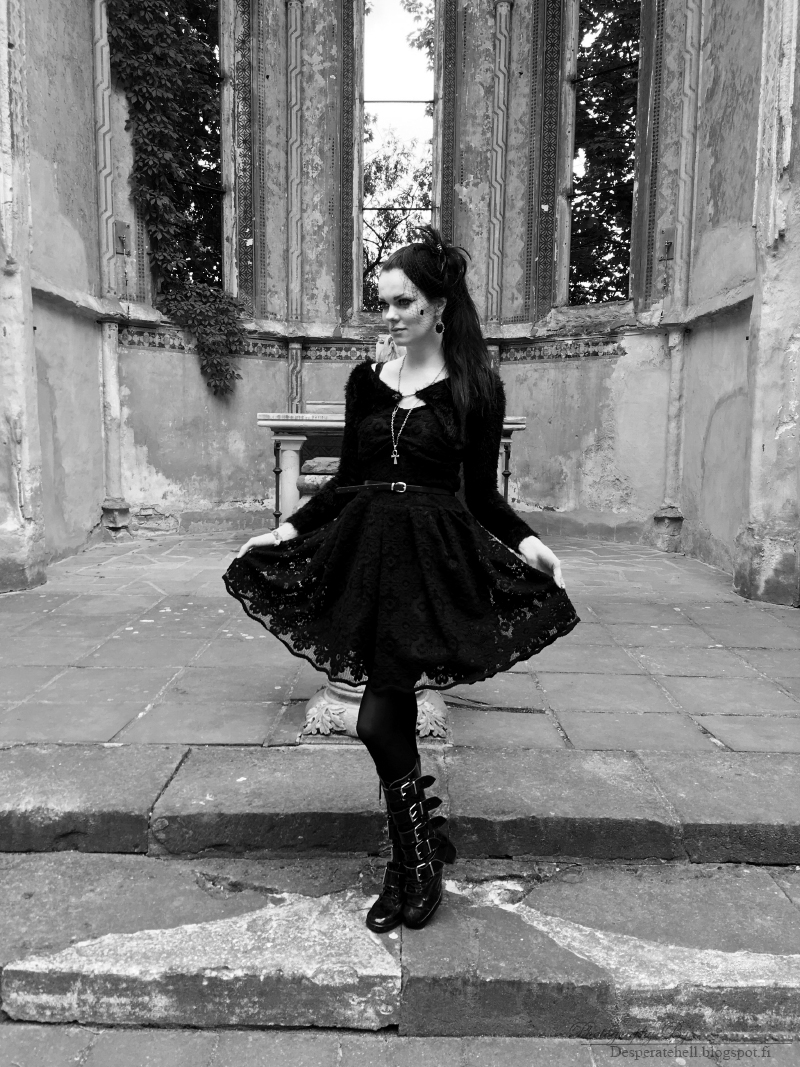 Outfit of the first day. A self made lace dress and my favorite boots. I didn't plan my costumes this year much. I just chose something which I found in the wardrobe. 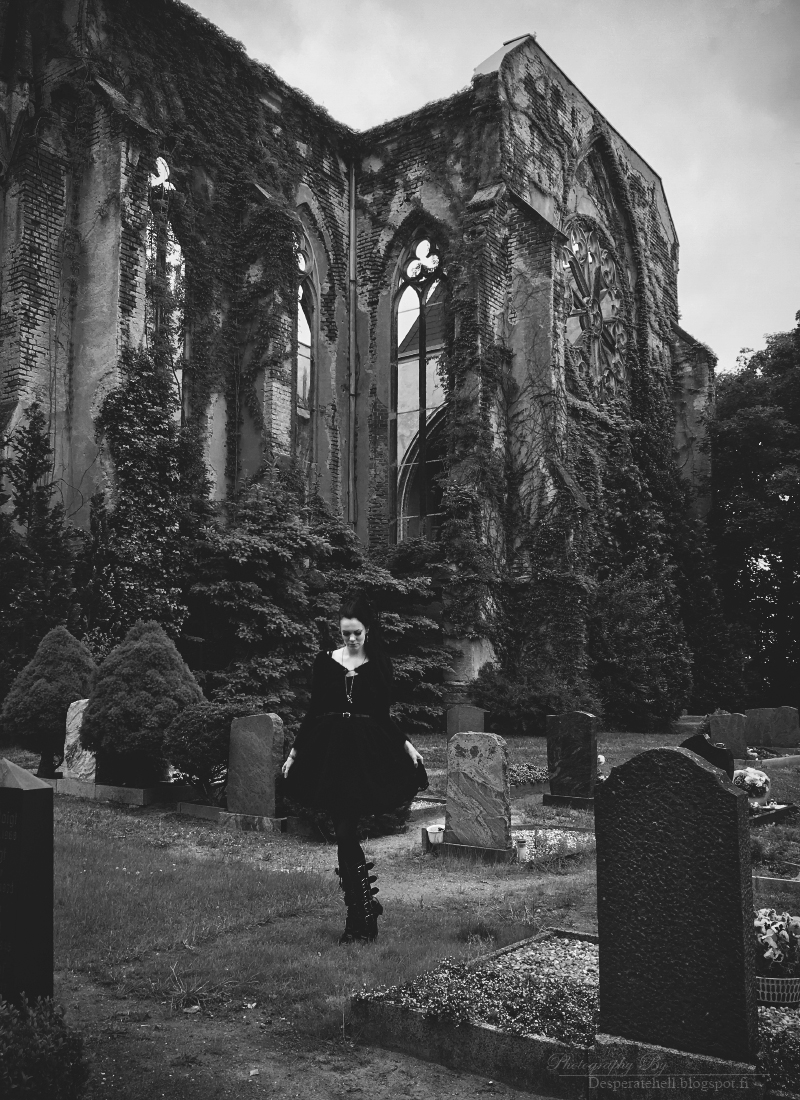 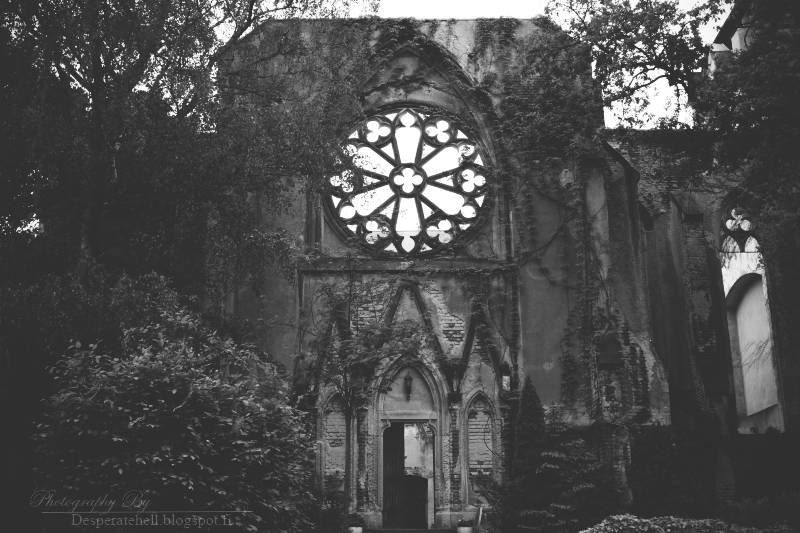 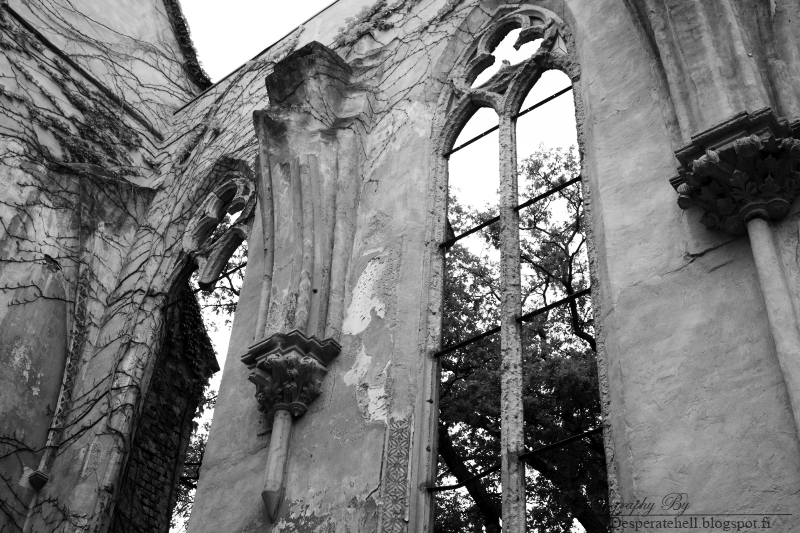 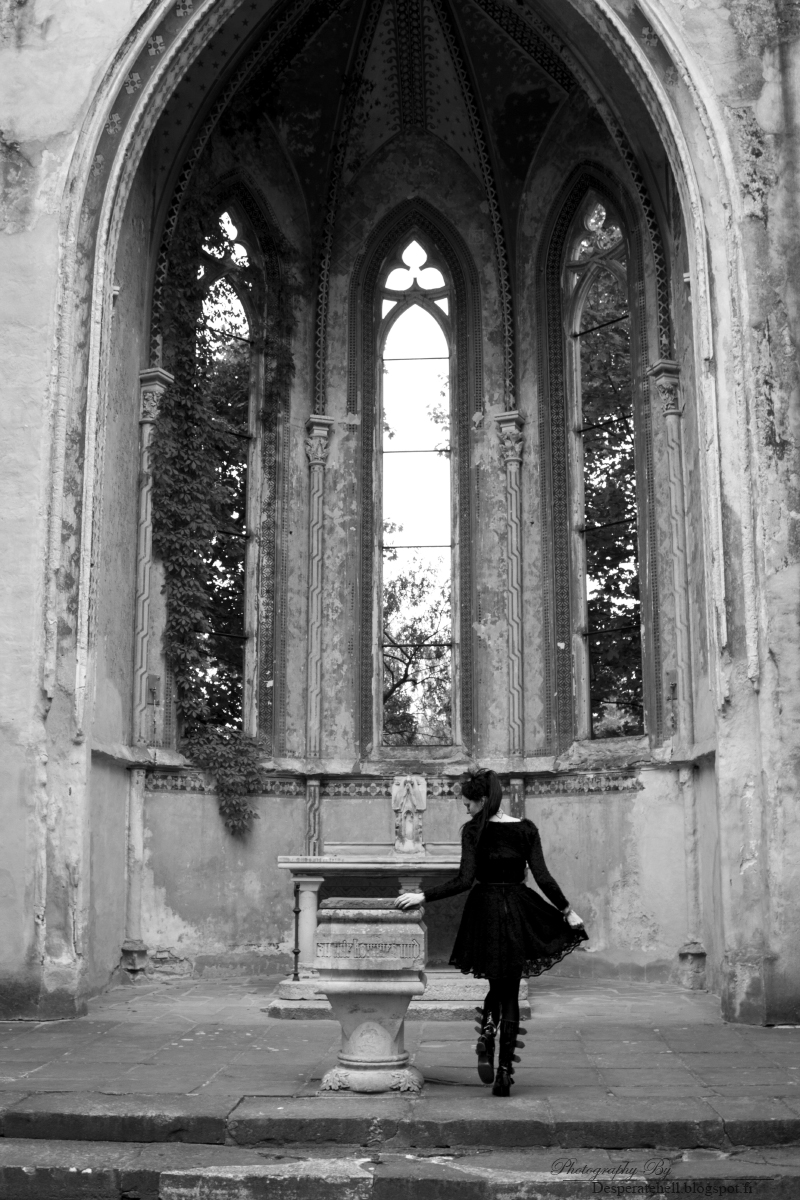 Ash Code was the band of Friday and they played at Stadbad which was a new location to us. We have tried to visit and see the new venues and places every year when there is so many to see that you can't see everything at once. There was a long queue, but we were lucky to get in.

The summer got me to whirl and that's why I have spent some silent days here in the blogosphere. I've been enjoying sun bathing outdoors (of course  with some strong sun protection to maintain my pale skins as white as possible) and in additions there has been other more important duties at hand.

Wave Gotik Treffen is all the time haunting in the mind, but  my mind is still a question mark how to dress this year. I don't stress it so much, but some garments have already lost into the suitcase. Perhaps something quite minimalistic this year or at least I have a strong feeling about it right now. Days run crazily and soon it's time to leave. Exciting. 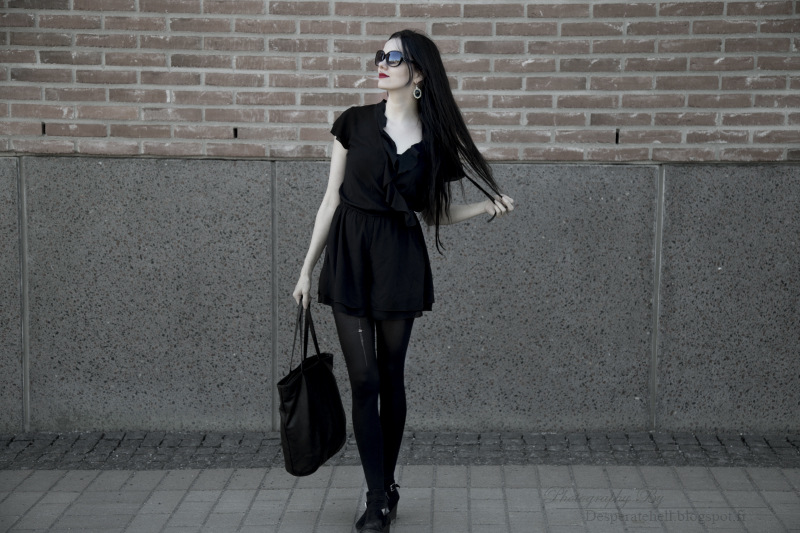 This outfit is from Thursday which was a day off and it was a really warm weather. Thus we ended up having a picnic at the park with my beloved. A dress is chiffon short suit which I bought a year ago and it is still my very favorite summer garment. I worn it much over last summer and I have a doubt of my own that I will wear it also this year. Chiffon is perfect material in the summer. It's light and chilly. 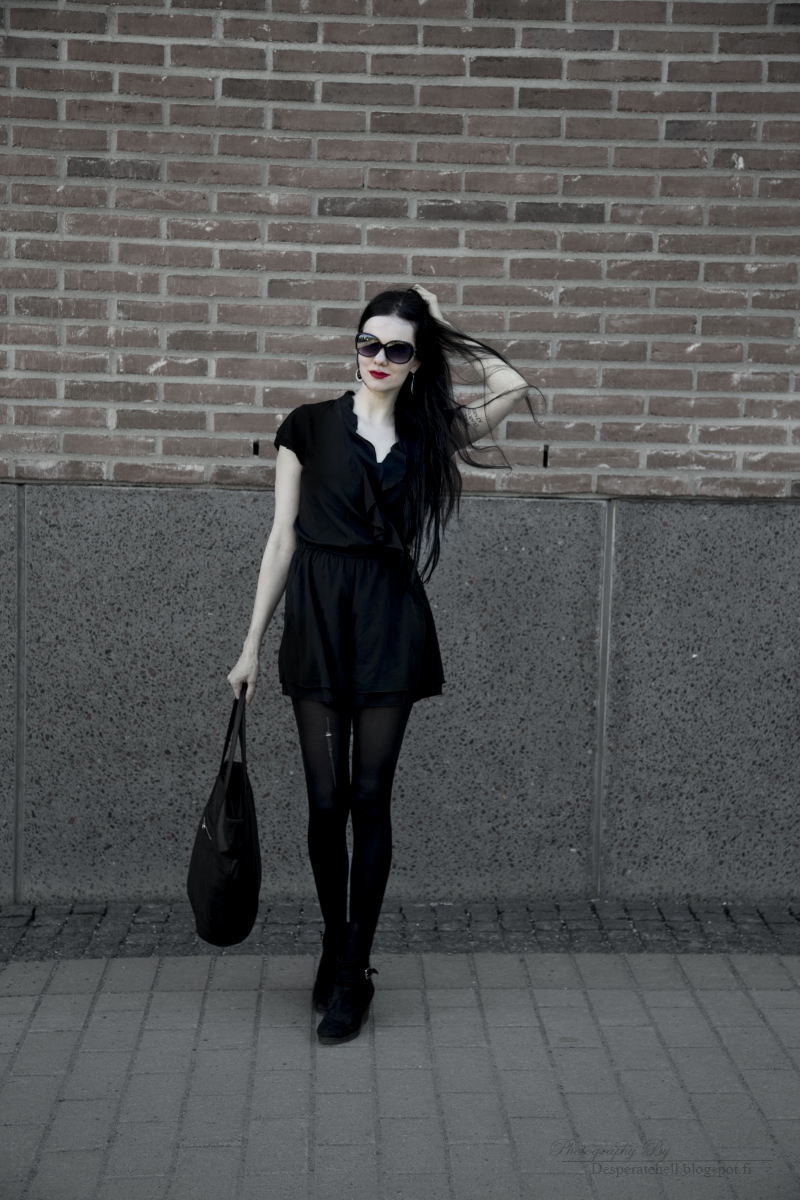 Let's see if I have time to blog before a journey or not, but if not then I will return with festival photos  and news. Hope you all are fine  and I wish you a happy weekend!
Lähettänyt Suski klo 8.31 2 kommenttia:

Our May Day was spent quite tightly indoors due to the rainy weather which didn't tempt to leave the house. I walked through the city yesterday with the umbrella, but otherwise we spent the day indoors by watching among other things Moomins and the Winter wonderland and I poured dry sparkling wine down the throat. Usually the city is packed with the people, but now it was as vivid as the graveyard.  On Monday evening we visited the bar and it was nice to sit at the bar over a few beverage and it was much prettier weather. 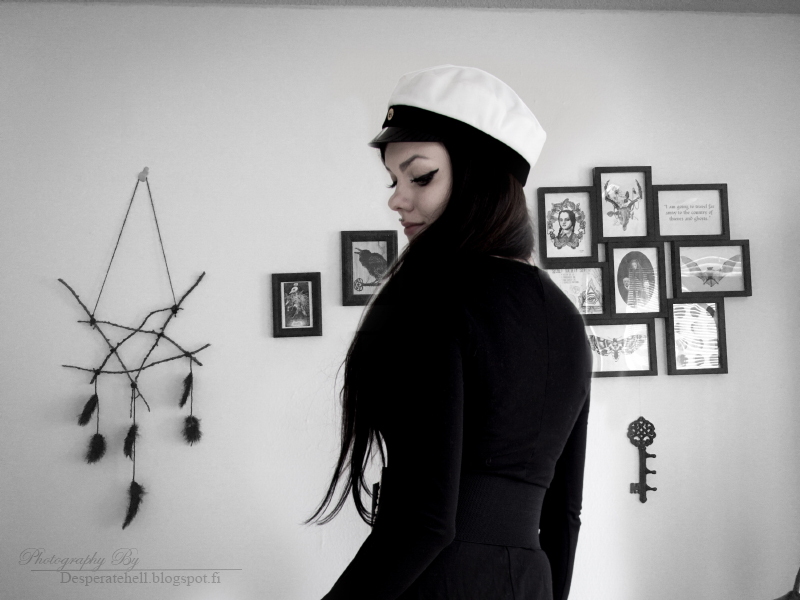 My simply outfit and student cap. 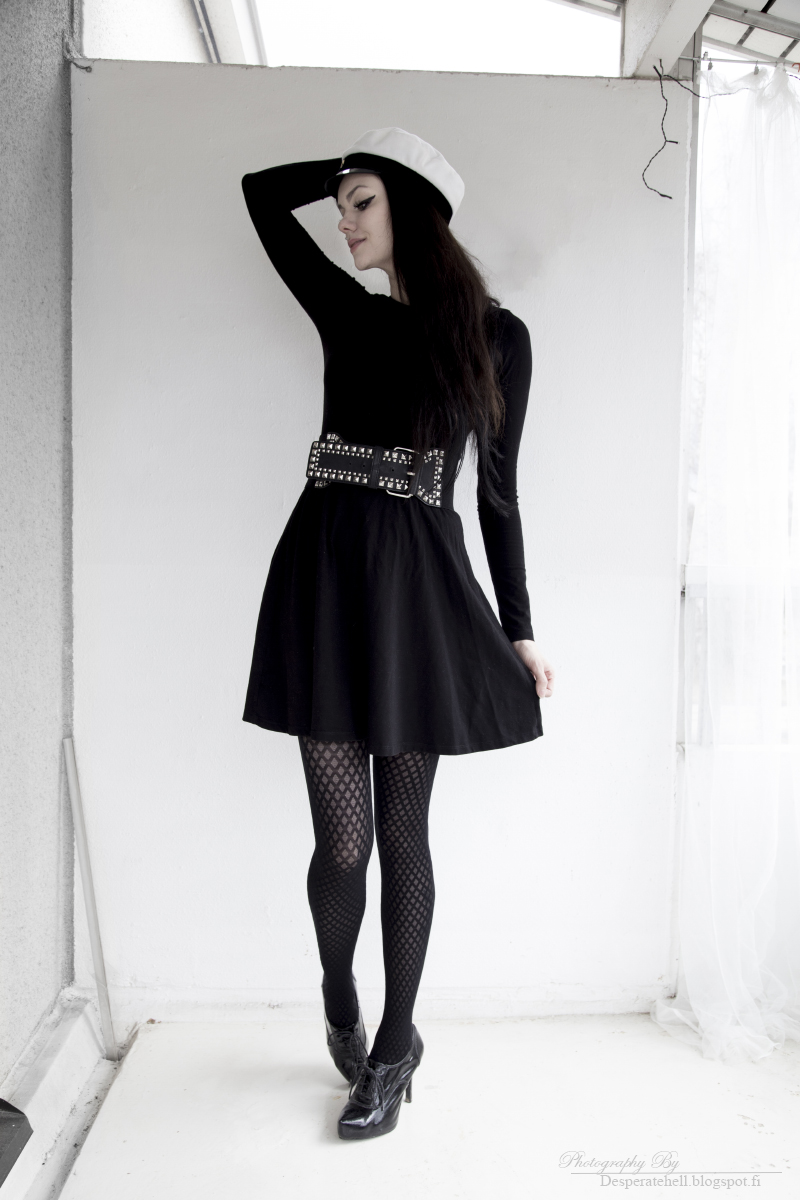 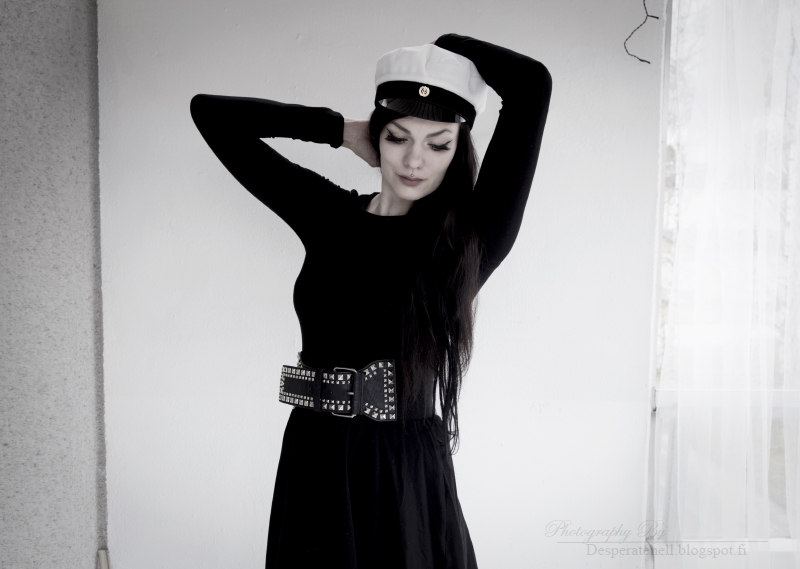 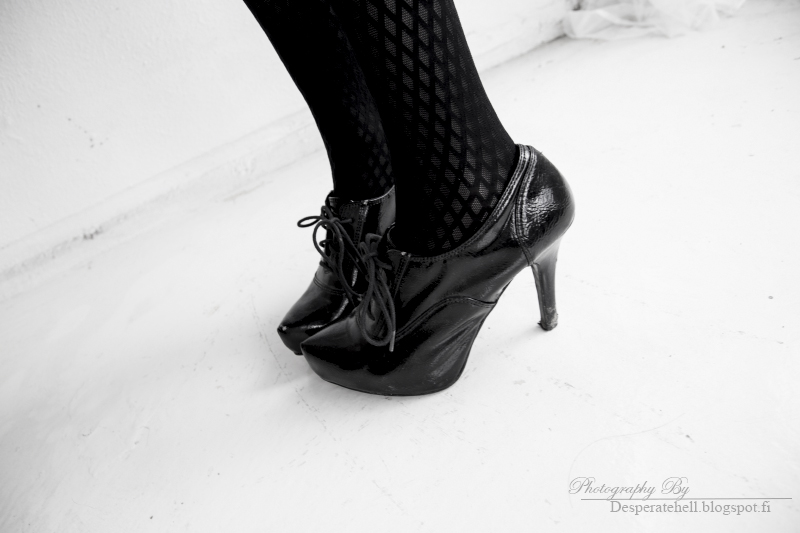 Now I start to target my mind to the Wave Gotik Treffen which is soon here! My mind is still open for the outfits, but perhaps I will figure out something. I have not made anything new this year so I will go with the old robes and imagination. Only two weeks and can't believe that. Last WGT just happened!
Lähettänyt Suski klo 19.13 2 kommenttia: