Hello! I took pictures of the day's outfit and decided to share them immediately with you  when there still seems to be energy left after jogging and pole dancing. It seems that I have became addicted to all kind of exercising. Recently I have visited three times a gym per week and in addition I've practiced with a pole at home by fits and starts and now I decided to start jogging... and back to that outfit. It was quite colorful to my taste. Red lips combined with the striped shirt are enough to make it looks vivid. 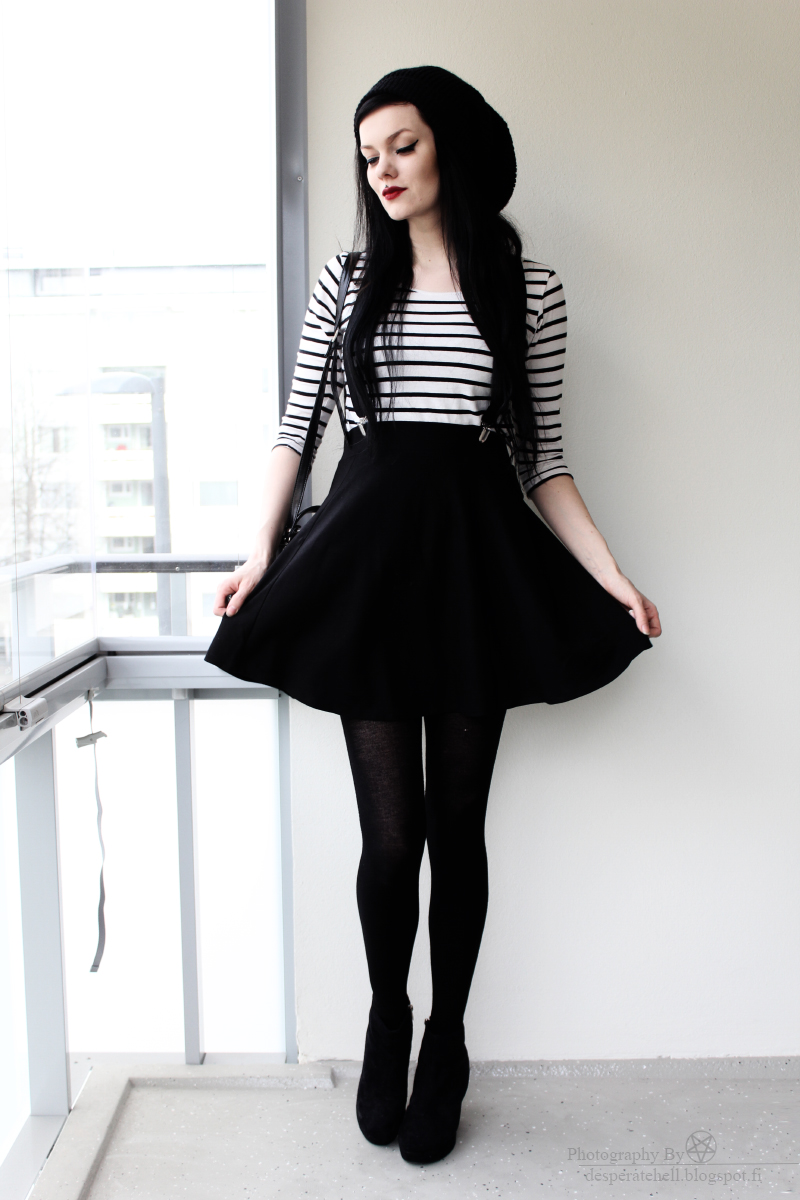 I also tested my new makeup which I got yesterday. A lipstick is some random from Ebay and it cost only one euro, but the shade is perfect and the product seems to be quite quality as well. Usually I don't buy cheap cosmetics from Ebay, but this was an exception. I ordered some jewelries and the seller  also sold the  cosmetics so I decided to grab this too. Yesterday I went to buy food and I couldn't avoid these Nyx's products which finally arrived at Finland. Many people seems to use Nyx and the brand is totally unknown to me so I wanted to give it a try. At least concealer worked fine and I hope the spray works too. It's quite weird to sprinkle that onto the face after finishing make-up. What do you think of Nyx? 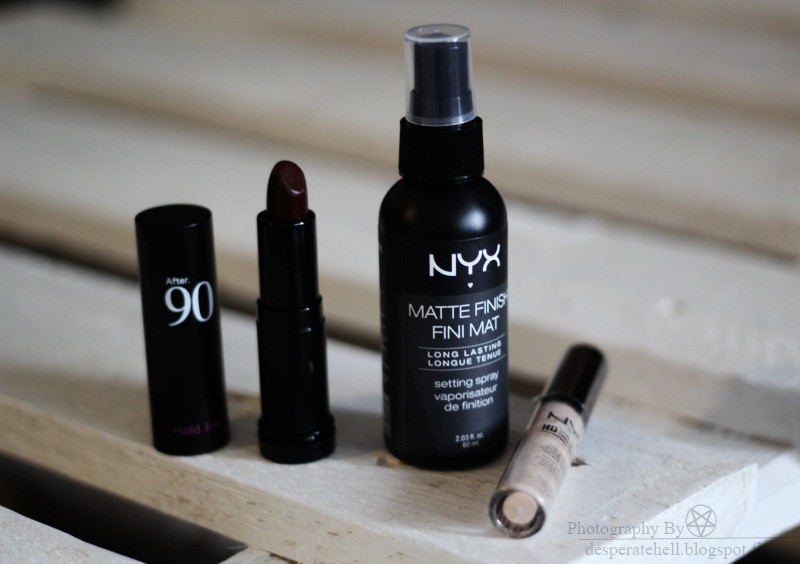 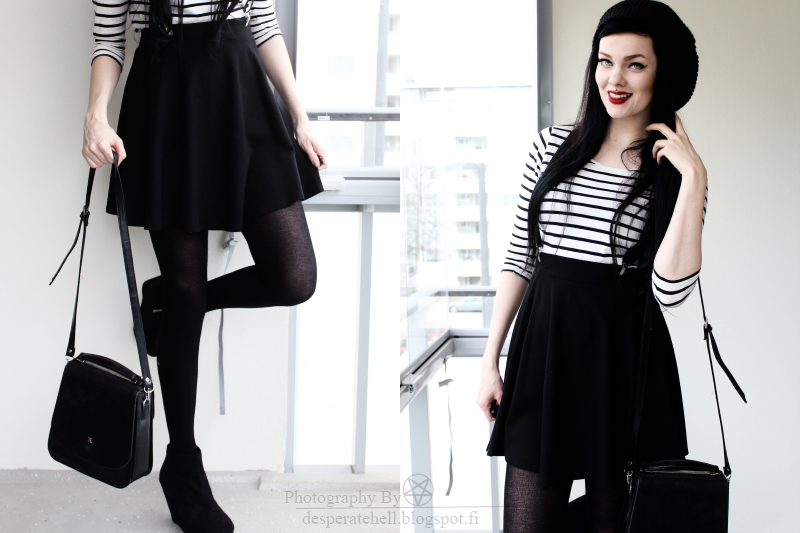 Hope you all have a nice weekend!

So I ended up crafting the horns the last weekend when I had a day off. I got the idea a year ago at Wave Gotik Treffen when I saw some pretty cool horns and it feels that everyone there was wearing them. I nearly bought one pair too, but then they were sold out when I returned to looking for them. I remember saying that I will never get horns because I didn't like them at all at first, but here I'm. This is so typical to me that for a start I can't stand something and then my mind makes a U-turn and there I go...

I'm not going to do any tutorial about how to do these because I think web is filled with them and you can always use your own imagination what I did, but I can tell you what I used: hairband, aluminium foil, clingfilm, black spray and hot glue. Quite cheap and simple way to do your own horns. I needed to buy only the hairband, everything else I had already.  Of course the real deer horns would be even better looking as these, but perhaps these go better together with my outfit. Let's see if I wear these at WGT this yeas ;) (and talking about WGT and outfits I have a huge panic because I don't have anything to put on and there is only a few weeks left and I don't have the time to sew anything!!!)

What do you think of the horns? Yes or No?

Ps. My boyfriend didn't understand this "horn thing" at all and my ex-boyfriend asked am I going to attend some Christmas spectacle in coming Yule...
Lähettänyt Suski klo 19.06 6 kommenttia:

Hello! Finally I found an inspiration to take pictures about the chair which I bought on Easter from Karoliina. It's the old rococo chair which is repainted and covered so I didn't need to do anything to  get it sit into my decor. Black and purple striped fabric is great though I haven't anything purple in here at least so far ;)   I've wanted exactly the chair like this for ages, but there haven't been proper ones around here. Usually good ones are too expensive or they are situated across the country and they should be picked up by the car. Here are a few shots about my bedroom corner how it looks now: 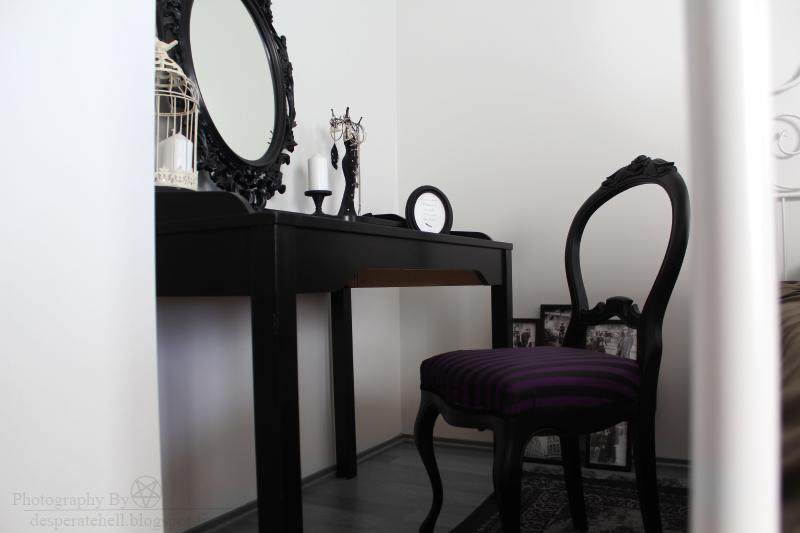 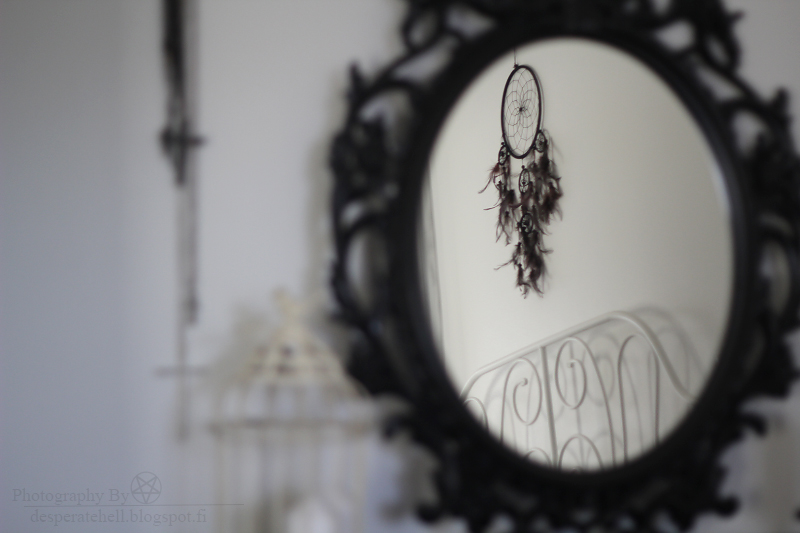 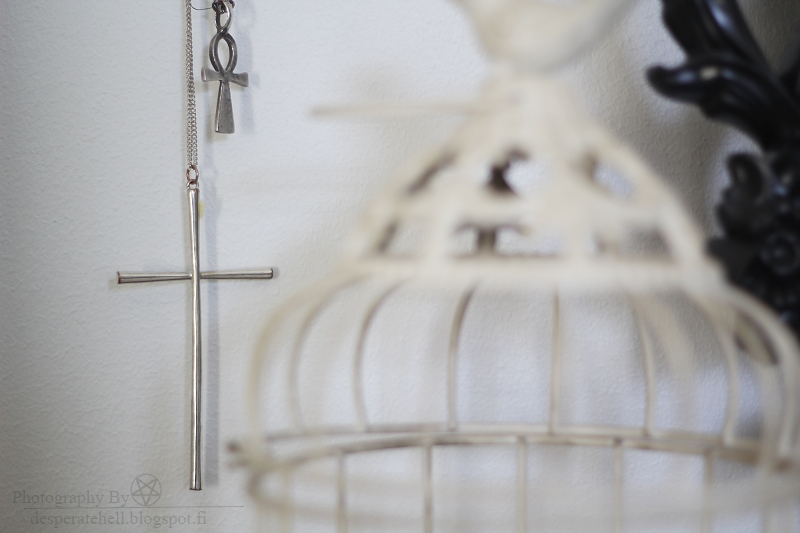 The Art of Alice

Good evening! I decided to take a few picture of my source of inspiration and share it with you. Like you may know I've played Alice Madness Returns game and some time ago I bumped into the wonderful art book in  a library which is based on that gorgeous game. This book is pure love and I get much good vibes every time I riffle through it. I wish I could get this masterpiece into my own bookshelf. The drawing technique is a bit similar I prefer to use myself so perhaps that's why the book pleases my eyes and of course it's dark enough ;)  Here are a few shots I took: 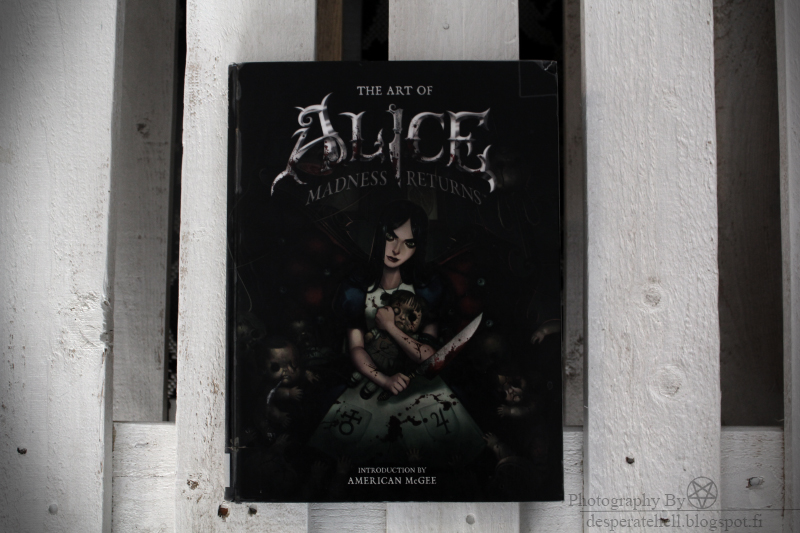 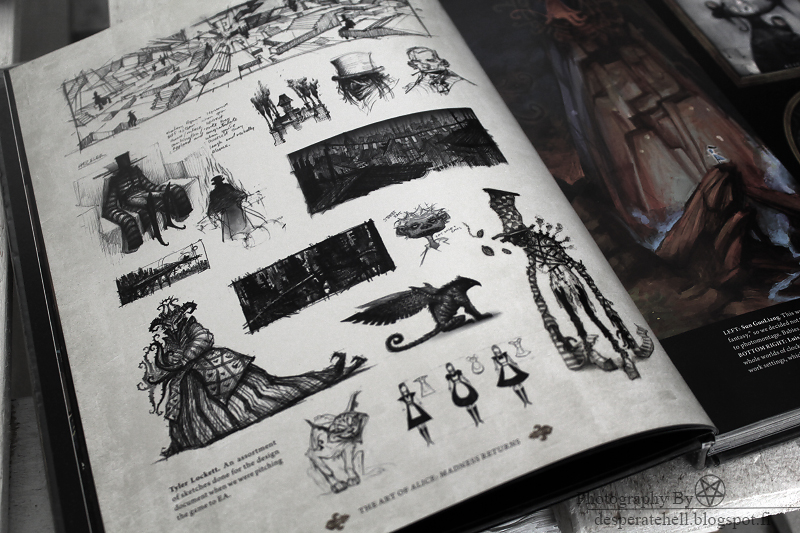 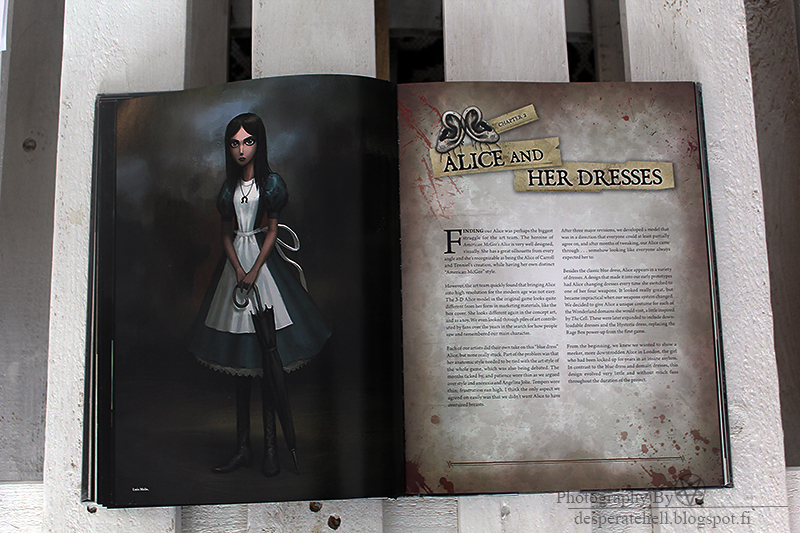 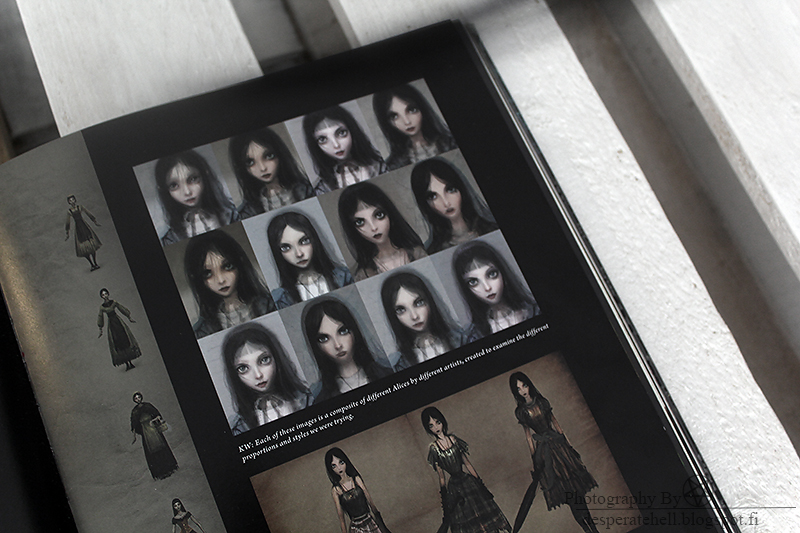 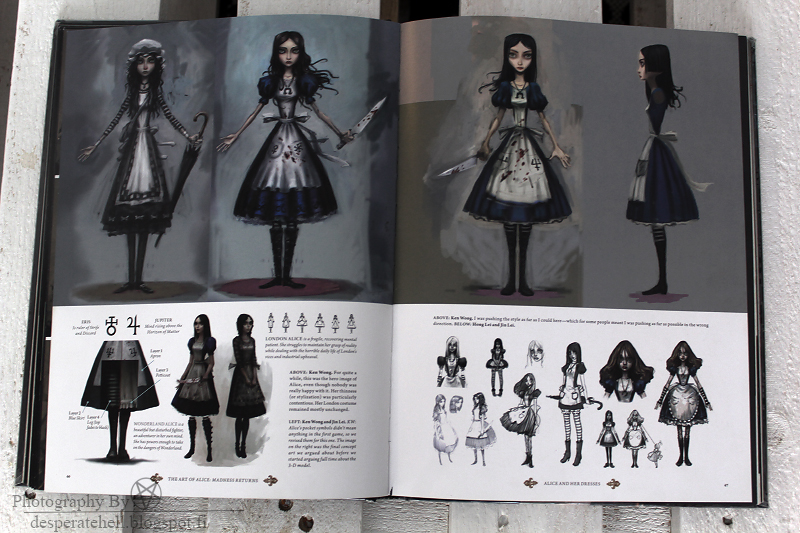 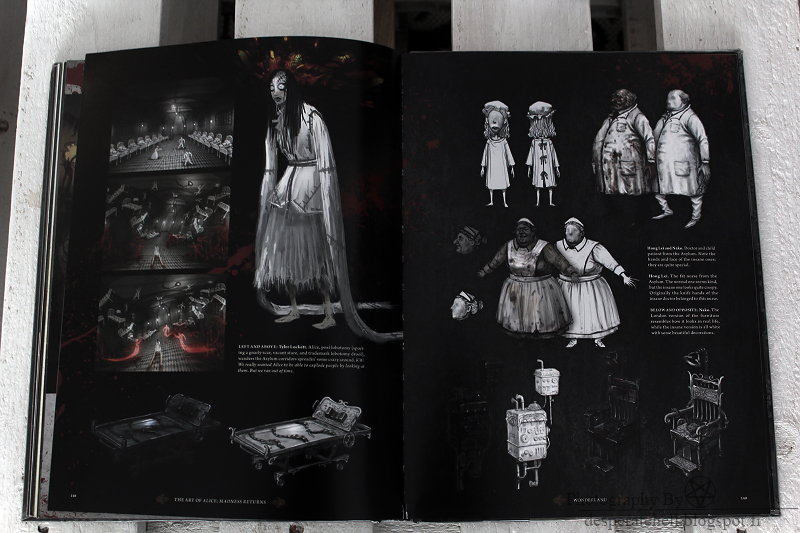 It's a good moment to sum up a week when there is only a few hours left of it. Nothing specific happened though. I've visited swimming and gym and the weekend went just at home alone with the good music and book. What else an introvert can wish? ;D Of course I spent also some hours at work. In addition I've dreamed of a dog a lot! My beloved is probably quite bored with hearing my stories about the dogs and how I repeat the sentence "I wanna have a dog"  in a manic way. I would have liked to get Labrador now in the spring, but because I'll spend my whole summer at shift work and I don't have a proper holiday, I decided it's better to wait a year. Until then I can only admire  puppy pictures from the Internet.

Today I visited a bar when we had a mini meet-up there and here is the look I wore:
A dress from the Stone Age like also are those tights, Vagabond's shoes and a fringed bag. 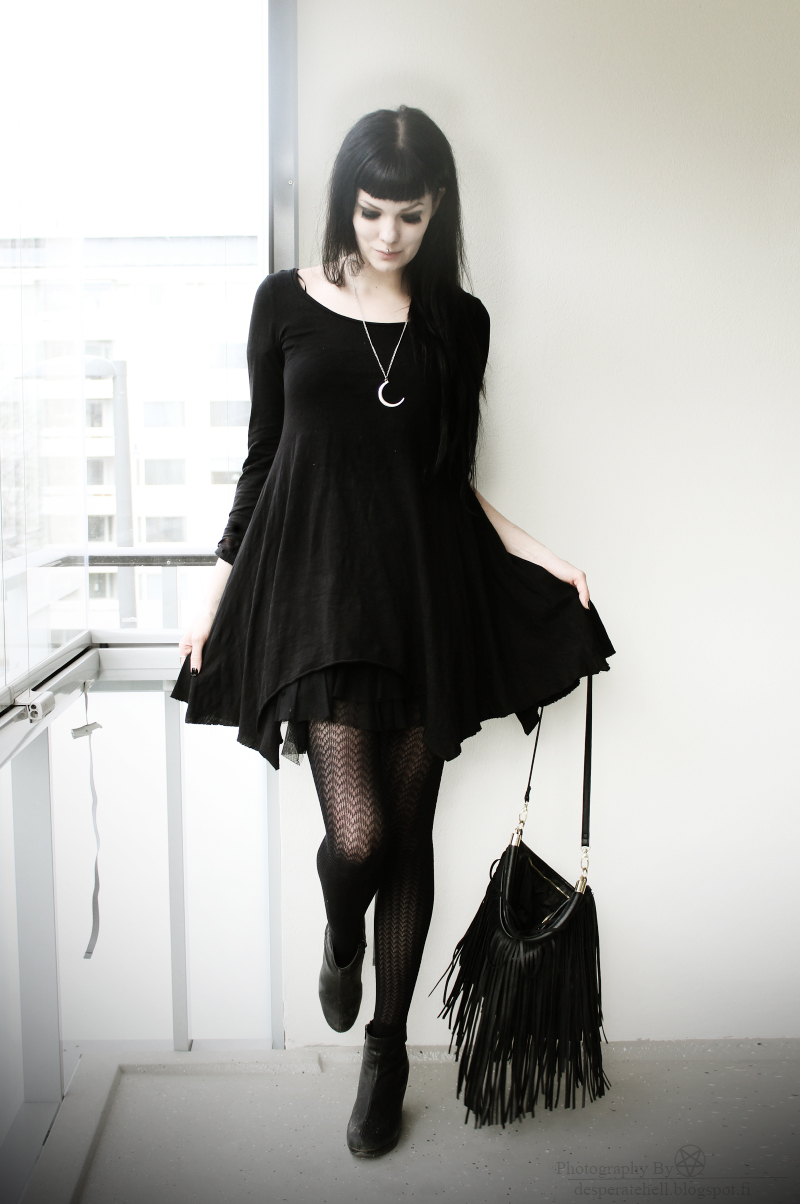 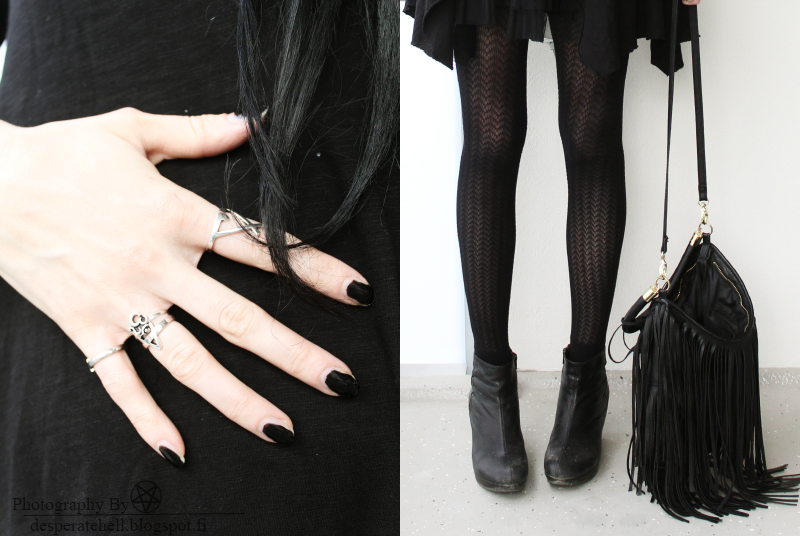 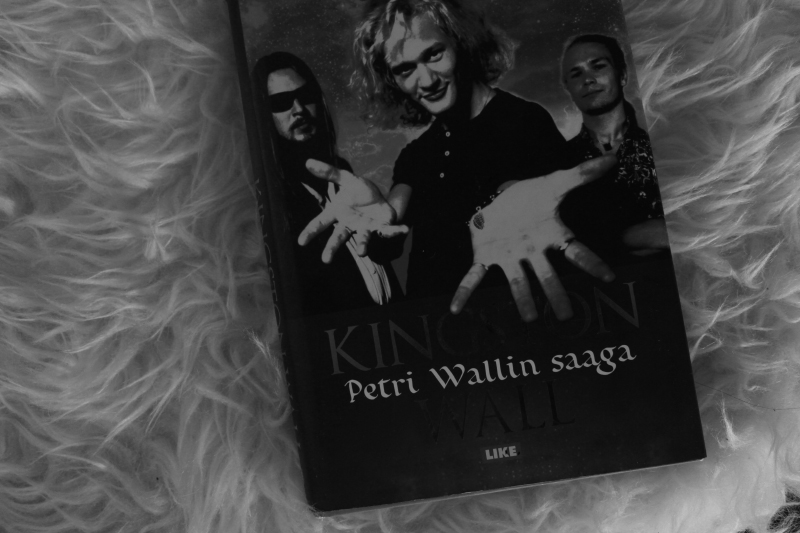 Hope you all had a nice weekend! I will keep up reading of the book and drinking of tea while listening to some good songs.
Lähettänyt Suski klo 20.11 9 kommenttia:

A girl in the shadows

I decided today that the summer begins now and so I put on the false leather jacket which is one of my favorite coats. I'm so bored with wearing the heavy winter overcoats after a long term that I could put them on somewhere where the sun doesn't shine (to the basement). With the jacket I wore a second hand pencil skirt and new shoes from Vagabond. I was lucky once again to bumped into the shoes with a proper discount. I paid only a half of the original price.

Thanks to my beloved who took a few pictures of me today in front of Vastavirta when we went to pick up their instruments which was left there after yesterday's gig. About that gig, it was a small disaster. Ambulance visited twice 'case the singer hit her head while coming down from the table after being nudged by a guitarist and ended up visiting the hospital in the end. At least they managed to create  an immemorial show. 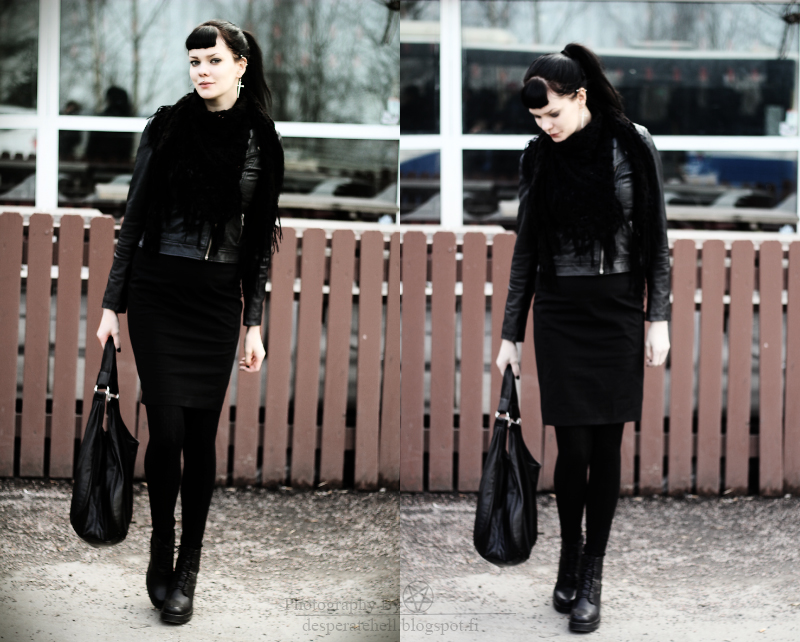 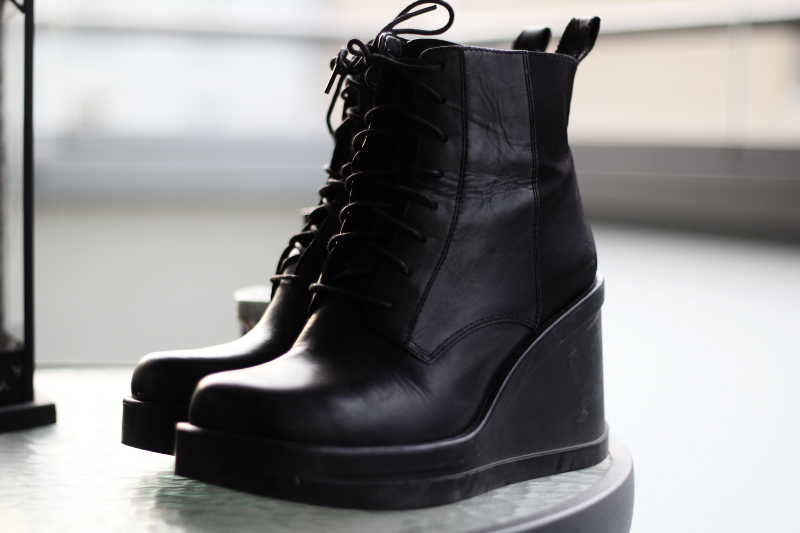 May I give you an injection?

My week has been good in a many ways. In a last post I spoke about the fatigue and the demons, but I've managed to drive them off at least so far. Perhaps I'm still a bit tired, but just because I've brought about so much during the week. The best thing is perhaps that I got a new job for the summer and I didn't even apply for it. They asked me if I was interested and of course I was. It's my own field and the wage is better so I don't need to be a poor artist during the summer. I still continue my old job in autumn. I was about to keep a little bit holiday in the summer and do my own projects, but I can forget them now. Life always surprises and forms the new unexpected paths.

My day's outfit. It's been a really sunny day so I decided to go in this look today: 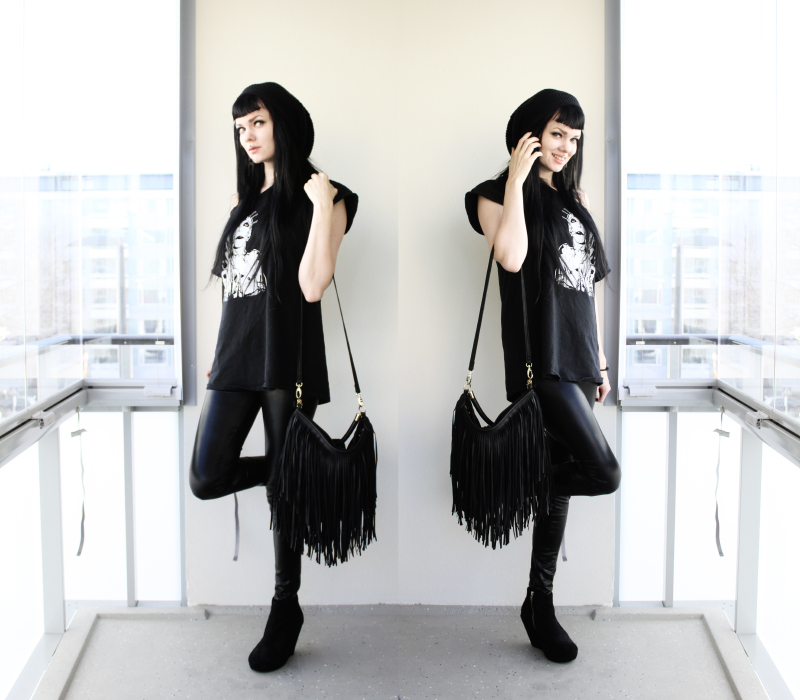 I'm in love with those pants which I got from Queen of Darkness! They look so cool and goes with different clothes. I also like those wedge shoes which I found in a flea market years ago. 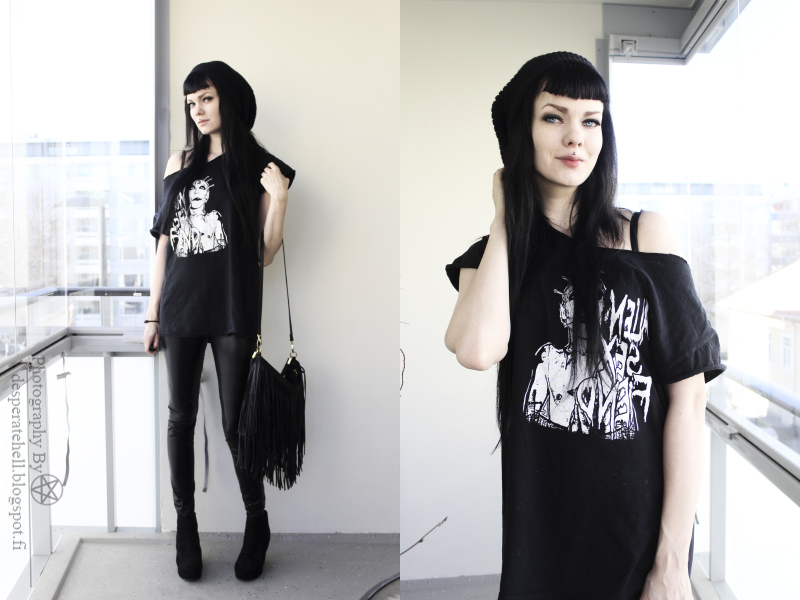 I keep up watching of True Blood. The second season is running ;D Hope you all have a nice weekend!
Lähettänyt Suski klo 18.26 2 kommenttia: